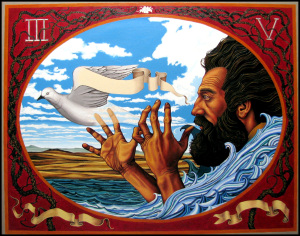 Luke 3:7-18   John said to the crowds that came out to be baptized by him, “You brood of vipers! Who warned you to flee from the wrath to come? 8 Bear fruits worthy of repentance. Do not begin to say to yourselves, “We have Abraham as our ancestor'; for I tell you, God is able from these stones to raise up children to Abraham. 9 Even now the ax is lying at the root of the trees; every tree therefore that does not bear good fruit is cut down and thrown into the fire.” 10 And the crowds asked him, “What then should we do?” 11 In reply he said to them, “Whoever has two coats must share with anyone who has none; and whoever has food must do likewise.” 12 Even tax collectors came to be baptized, and they asked him, “Teacher, what should we do?” 13 He said to them, “Collect no more than the amount prescribed for you.” 14 Soldiers also asked him, “And we, what should we do?” He said to them, “Do not extort money from anyone by threats or false accusation, and be satisfied with your wages.”
15 As the people were filled with expectation, and all were questioning in their hearts concerning John, whether he might be the Messiah, 16 John answered all of them by saying, “I baptize you with water; but one who is more powerful than I is coming; I am not worthy to untie the thong of his sandals. He will baptize you with the Holy Spirit and fire. 17 His winnowing fork is in his hand, to clear his threshing floor and to gather the wheat into his granary; but the chaff he will burn with unquenchable fire.” 18 So, with many other exhortations, he proclaimed the good news to the people.

I’m going to skip right over the question about how many of you even knew there was a prophet named Zephaniah and whether or not you knew there is a book in the Bible with his name on it.  Not one of our more commonly referenced prophets, the book is only three chapters long and filled with fierce, angry, wrath of God type stuff.  Somewhere along the way, this God who gets angry fell out of favor and not often discussed.  Because really, who’s in favor of being on the receiving end of anyone’s anger, much less God’s? [1]

So this brings me to a question – one that you could answer easily, unlike the Zephaniah Bible quiz.  Have you ever had someone stand beside you and get angry on your behalf?  You’ve been down and out through no fault of your own or cheated or bullied and someone stands with you railing against the injustice of it all.  Your friend is angry for you and maybe even with you.  Well, this is a small scale way of appreciating the wrath of God message of the prophets – an historic tradition of people who call attention to injustices perpetrated by people against each other and against God.  There is a temptation we need to be careful to avoid as we compare our friend’s righteous anger and God’s righteous anger.  The temptation is that we often view ourselves on the side of God over and against whatever is happening that we may dislike – as opposed to standing apart from God along with everyone else.

Zephaniah’s words of hope come at the very end of a two and a half chapter prophetic rant.  And it includes a beautiful promise about God.  Zephaniah says, “He will renew you in his love.” Hear this again, please… “He will renew you in his love.”  How easy would it be view this promise through the soft, filtered light of a dewy, spring morning?  Too easy, if you ask me.   Too quickly, we are inclined to move to a sentimental notion of renewal that leaves the power of God dull and lifeless in our own minds.  And has us saying things like, “I’m not sure I like that Old Testament God.”  Or, “The Old Testament God came out for war and the New Testament God came out for a game of golf.”  In the desire to distance ourselves from the anger, we disconnect God’s story into two distinct pieces rather than appreciating the continuity of  God from the Hebrew Scriptures into the good news of the Gospel.  And sometimes I wonder if we’re not leaving out the better part.

Well, John the Baptist didn’t get the memo.  Listen to him! “You brood of vipers! Who warned you to flee from the wrath that is to come?”  John’s words reveal him to be part of the continuity between what happened as described by the prophets of old and what is happening now to the crowds who are swarming out to meet him.[2]  Although, after John’s greeting, I would guess that a few of them were wondering why they made the trip.

Another way to think about repentance is through this lens of being renewed in God’s love, being revealed in all that we are in the fullness of the good, the bad and the ugly.  The crowd, tax collectors and soldiers ask, “What then should we do?”  The crowd is apparently hanging onto more than they need, the tax collectors are collecting for Rome but lining their own pockets by overcharging, and the soldiers of the time are bullies, extorting money from the people.  In short, John tells them to share, play fair, and be kind.  This is not rocket science.  This is renewal that stands you with your neighbor rather than against them.

We can so easily stand apart from the crowd, the tax collectors, and the soldiers, feeling grateful that those aren’t our particular sins.  However, I see us smack in the middle of this crowd wondering why we came in today only to hear John’s words push against us, too.  After all, it’s difficult to fully celebrate the arrival of a savior if you don’t see much need for one from the start.

But then John lobs out a power-filled promise of God’s renewal and I’m left breathing deeply and overflowing with hope:

“16 John answered them all by saying, “I baptize you with water; but one who is more powerful than I is coming; I am not worthy to untie the thong of his sandals. He will baptize you with the Holy Spirit and fire. 17 His winnowing fork is in his hand, to clear his threshing floor and to gather the wheat into his granary; but the chaff he will burn with unquenchable fire.” 18 So, with many other exhortations, he proclaimed the good news to the people.”

The power of Pentecost is on fire just under the surface of this Advent text.[3]  The Holy Spirit, at work in Mary’s pregnancy, has more in mind than the gentle quiet of a nativity scene.  The Holy Spirit has us in mind, my friends.

John’s proclamation that “the one who is coming…will baptize you with fire and the Holy Spirit,” is indeed good news.  One of the ways John’s words help us today is by working us toward an understanding of this wild promise.   This begins with the distinction he makes between the wheat and chaff.  I see each of us here today as one of those grains – a grain sitting all warm and cozy within the chaff that surrounds it.  We get used to our chaff.  Some might even argue that we’ve made peace too easily with our chaff, our sinful selves.  But part of the promise is that our repentance, our surrender to the one who has the power to renew us, is that the sin gets called out in truth, gets forgiven and gets worked with.  And once that happens, look out!  This kind of renewal is more than a spa day – it is a salvation day in the here and now.

There are all kinds of ways God’s renewal in God’s love by the power of the Holy Spirit looks in people’s lives.  It can look utterly dramatic on the outside – like the woman with whom I’ve worshiped who killed her lover’s wife and has been incarcerated in Denver Women’s Correctional Facility for the past 20 years.  This woman sits in a Bible Study about the 10 commandments and confesses to breaking all of them.  She has a powerful ministry within the walls, reaching out in faith to other offenders –taking responsibility for her crime and living with the consequence as she sings of Christ’s freedom at Friday evening worship.  Renewal for her is being freed into a new future; one not defined by her past or the perception of those around her or even her location.

God’s renewal in God’s love by the power of the Holy Spirit can also look more subtle.  It can look like people who rage, gossip, gloat, hoard, cheat and bully, in both clever and unaware ways, and those same people walking up to bread and wine, surrendering to the Holy Spirit’s power to renew us in forgiveness and hope.   In short, it looks like people in need of a Savior, people who may or may not see or understand this need, and who celebrate his birth.

We are a people who need a Savior and who, very soon, will celebrate our Savior’s arrival.  Because we do not have a God who uses power to do us harm out of anger.  Rather, we have a God who, by the power of the Holy Spirit, came among us in skin and solidarity under star and comes among us now in Word, water, bread and wine – forgiving us and refining us by the power of the same Spirit.  We are prepared to receive our Savior in this Advent time by “the one who is and who was and who is to come.”[4]