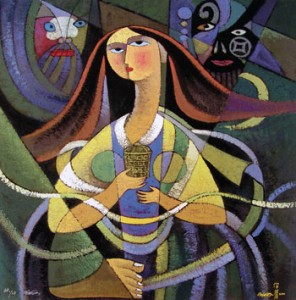 John 20:1-2, 11-18  1 Early on the first day of the week, while it was still dark, Mary Magdalene came to the tomb and saw that the stone had been removed from the tomb. 2 So she ran and went to Simon Peter and the other disciple, the one whom Jesus loved, and said to them, “They have taken the Lord out of the tomb, and we do not know where they have laid him.”

11 But Mary stood weeping outside the tomb. As she wept, she bent over to look into the tomb; 12 and she saw two angels in white, sitting where the body of Jesus had been lying, one at the head and the other at the feet. 13 They said to her, “Woman, why are you weeping?” She said to them, “They have taken away my Lord, and I do not know where they have laid him.” 14 When she had said this, she turned around and saw Jesus standing there, but she did not know that it was Jesus. 15 Jesus said to her, “Woman, why are you weeping? Whom are you looking for?” Supposing him to be the gardener, she said to him, “Sir, if you have carried him away, tell me where you have laid him, and I will take him away.” 16 Jesus said to her, “Mary!” She turned and said to him in Hebrew, “Rabbouni!” (which means Teacher). 17 Jesus said to her, “Do not hold on to me, because I have not yet ascended to the Father. But go to my brothers and say to them, “I am ascending to my Father and your Father, to my God and your God.’ ” 18 Mary Magdalene went and announced to the disciples, “I have seen the Lord”; and she told them that he had said these things to her.

While I am delighted to preach almost anywhere, and at any time, I am especially delighted to be here with you today, this 22nd day of July. Now, if you’re like me, you probably don’t have your calendar marked with anything special on this day except for maybe somebody’s birthday or your wedding anniversary.  But every year on July 22nd, Christians of various ilks around the world – including Anglicans, Roman Catholics, Orthodox and Lutherans – commonly celebrate the Feast Day of Mary Magdalene.  And today, this festival in her honor falls on a Sunday.  As a preacher and as a woman, it’s hard to top this lovely confluence of day and date.  And I had a sermon that was a high-energy celebration of Mary Magdalene, the Apostle to the Apostles, confidently announcing, “I have seen the Lord!”

And then the shooting at the movie theater in Aurora happened in the dark hours of Friday morning.  So many people died and many more were wounded physically, spiritually and emotionally.  My festive mood deflated as quickly as a party balloon pricked by a pin when I remembered that a dear friend in East Denver was going to that showing.   It took some time to figure out if he had gone to that midnight show at that theater.  He hadn’t.  But in my relief for his well-being, I was also aware that many in the city didn’t receive that good news and my heart broke for them.

By mid-morning on Friday I became compelled to look at Mary’s story again – through eyes once again weary of the ways we inflict ourselves on each other and create such pain.  Mary has just been through the horror and violence of Jesus’ death on the cross and most likely her own life was in danger in the swirl of the social and political chaos that hung Jesus there.  But chaos is not new for Mary.  Scripture in Mark and Luke make reference to “Mary Magdalene, from whom [Jesus] had cast out seven demons.”[1]  Mary has a deep knowing of evil and its presence in her very being.

Undeterred by the realities of her own experience of evil and the evil played out in the crucifixion, Mary comes to the tomb to be near Jesus – following him as she has always done…and we follow her.  It is dark, really dark, midnight movie dark.  Mary’s eyes are dried out from crying, her mind moving slowly through that cloudy haze of grief, and her body exhausted by lack of sleep.  She must be wondering about what just happened to all that she thought she knew.  Because that’s how it goes, right?  The unthinkable happens, something that most of us cannot imagine, and it’s as if the world shifts off of its axis ever so slightly and alters time and space.

So Mary makes her way into the garden…only to be shocked once more.  Jesus is gone.  Not simply dead on a cross or in a tomb, but, literally, gone.  He’s not where he is supposed to be – similarly to how he wasn’t supposed to be dead on that cross.

In the aftermath of the movie theater shooting some of us wonder where Jesus is and, even more urgently, why he doesn’t seem to be showing up.  We wonder if the tears and fear in our own life will ever be brought to an end.  And, like clockwork, conversations about safety and preventing these kinds of murders take shape.

My sister who lives in Wisconsin called me yesterday.  She mentioned safety.  I told her that I’m not sure I believe in safety as the main thing.  Safety is a big thing.  I certainly want my kids to be able to sit through a midnight movie or a high-noon cafeteria lunch without the threat of death.  But there is another reality at work.  The garden we sit in today with Mary Magdalene echoes back into another garden story – a story “In the beginning” of the Bible that had a different gardener who ended up getting kicked out of the garden.  The Adam and Eve story is many things but for our purposes today it is one that names our sin and magnifies the real presence of evil in the world.  And standing between the garden in the beginning and the one in which we sit with Mary today is the cross.

The cross is a real-life example of our capacity to hurt each other in all kinds of shocking ways.  It is also one that calls out evil, names it for what it is and, in part by telling this truth, defeats it.

The murders that took place at the movie theatre in the dark hours of Friday morning were evil.  But if we imagine for a second that we do not also sit within the same darkness we only fool ourselves.  This is something that Mary knows.  She is drawn to the garden in the darkness, drawn toward the one who healed her and who knows her, only to find him gone.

Just when Mary didn’t think it was possible to cry even more tears, she begins to sob.  And this day, Mary’s hope to catch some peace in the garden, to take a breather after all that has happened, is shattered.  The despair seems never-ending because everything keeps going from bad to worse.  The stone has been rolled away and the tomb is empty and Jesus is gone.  And she gets asked the question, TWICE, about why she’s crying – first by the angels and then by the one whom she thinks is the gardener…  Until, finally, she hears her name… “Mary.”  And…she…knows…

Mary now knows that Jesus is raised from the dead; she now knows that there is life after death and so there is hope in despair.  Healed of demons by Jesus, called by name by the risen Christ and sent to tell the story, Mary Magdalene the Apostle, sees the world through eyes that know the worst of evil…yet trusts in an ultimate outcome – that God “will reach into sin and death and pull out healing and life.”[2]  The risen Christ shatters her expectations in the aftermath of evil as he calls her name and sends her on her way to speak this Good News.

How is the risen Christ speaking your name and drawing you through the darkness to himself?  Is his voice breaking through your despair and desperation, challenging you to a new reality through the scriptures?  Are our ancestors in the faith, and our brothers and sisters in the Body of Christ today, calling you to be in relationship with each other and with him?   Are the waters of baptism murmuring your name even as your sin is washed clean in the water?  Does Christ’s presence at his meal beckon you to love and forgiveness unknown except through him?  Yes, yes, yes and yes – Christ calls your name in all of those ways and more.  And he calls you into God’s new creation – a new garden – using your name, knowing all that you are so that you might know Christ for his sake, for your sake and for the sake of the world.

And on this day we join Mary in being claimed by hope – a hope that invades deeply into the despair knowing that despair does not have the last word – the last word belongs to Jesus who reaches into sin and death and pulls out healing and new life.