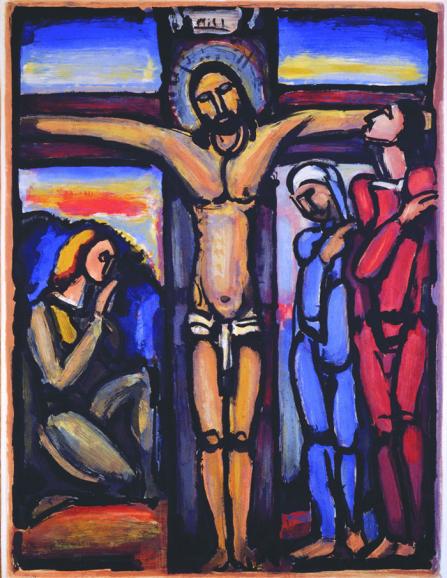 John 18:15-18, 25b-27   Simon Peter and another disciple followed Jesus. Since that disciple was known to the high priest, he went with Jesus into the courtyard of the high priest, 16 but Peter was standing outside at the gate. So the other disciple, who was known to the high priest, went out, spoke to the woman who guarded the gate, and brought Peter in. 17 The woman said to Peter, “You are not also one of this man’s disciples, are you?” He said, “I am not.” 18 Now the slaves and the police had made a charcoal fire because it was cold, and they were standing around it and warming themselves. Peter also was standing with them and warming himself.

25 Now Simon Peter was standing and warming himself. They asked him, “You are not also one of his disciples, are you?” He denied it and said, “I am not.” 26 One of the slaves of the high priest, a relative of the man whose ear Peter had cut off, asked, “Did I not see you in the garden with him?” 27 Again Peter denied it, and at that moment the cock crowed.

John 19:16-18, 25b-30, 40-42 Then [Pontius Pilate] handed him over to them to be crucified. So they took Jesus; 17 and carrying the cross by himself, he went out to what is called The Place of the Skull, which in Hebrew is called Golgotha. 18 There they crucified him, and with him two others, one on either side, with Jesus between them.

25b Meanwhile, standing near the cross of Jesus were his mother, and his mother’s sister, Mary the wife of Clopas, and Mary Magdalene. 26 When Jesus saw his mother and the disciple whom he loved standing beside her, he said to his mother, “Woman, here is your son.” 27 Then he said to the disciple, “Here is your mother.” And from that hour the disciple took her into his own home. 28 After this, when Jesus knew that all was now finished, he said (in order to fulfill the scripture), “I am thirsty.” 29 A jar full of sour wine was standing there. So they put a sponge full of the wine on a branch of hyssop and held it to his mouth. 30 When Jesus had received the wine, he said, “It is finished.” Then he bowed his head and gave up his spirit.

40 [Joseph of Arimathea] took the body of Jesus and wrapped it with the spices in linen cloths, according to the burial custom of the Jews. 41 Now there was a garden in the place where he was crucified, and in the garden there was a new tomb in which no one had ever been laid. 42 And so, because it was the Jewish day of Preparation, and the tomb was nearby, they laid Jesus there.

We began Lent on Ash Wednesday confronted with our own mortality.  Ashes are smeared on our foreheads in the sign of the cross and we are told, “Remember that you are dust, and to dust you shall return.”  A glaring reminder that life on the planet, our baptismal journey, ends in death.

Death leaves us longing for the spiritual. But in the meantime, we are stunned by its lack.  There is no heartbeat, no breath.  All is quiet.  From where we sit on this side of death there is no dressing it up.  At the bedside or roadside or war-side, wherever we encounter death, it is stark, austere, and unnerving in its lack of immediate meaning.  Death is simply absence.  Gone.  On this side of death, it is nothing more.

We begin Lent faced with our own mortality and a sign of the cross.  At the end of Lent this Good Friday, we are confronted by the cross itself.  Longing for the spiritual, we are stunned by its lack.  There is no heartbeat, no breath.  All is quiet after the betrayal, denial, ridicule, and execution.  The adrenalin fades.  The frantic hype is gone.  “It is finished.”  Jesus’ last words.  Finished.  All that’s left is to put him in a tomb and leave him there.

But the quiet of death breeds disquiet. Unnerved by the immediate lack of meaning the attempts to make meaning begin immediately.  Centuries of Christian thought have produced atonement theory after atonement theory.  Some more satisfactory than others.  Regardless, Gerhard Forde argues that all of these theories hold us “in a false relation to God,” most often reducing Jesus’ death to an unsatisfactory commercial transaction.[1]

Time and again in the New Testament, Jesus’ death is explained simply as “for us”.[2]  That is all.  “For us.”  Which necessarily means that Jesus died “for you.”  Jesus died for you.

The cross is God’s answer to the re-imagining of God that we do. That re-imagining that leaves us separate from God.  Oh, so you think you know who God is?  Well, what about a God who hangs dead on a cross and gets buried in a tomb rather than use divine power over and against the very creatures whom God loves. Jesus said, “When I am lifted up, I will draw all people to myself.”  Jesus on the cross simultaneously reveals the scope of divine power poured out to reveal the depth of divine love as we are drawn toward God.  When the self-sacrificing love of God, given fully, is made known to you, when this message of divine love gets through to you, you are drawn by God back into relationship. [3]

With great intention, Jesus hangs on the cross.  And, in one of his final acts while still breathing, does something radical.  Jesus turns to his own mother and then to the beloved disciple and redefines their relationship with the cross in between them.  “‘Woman, here is your son…then he says to the disciple, ‘Here is your mother.’”

Not only does Jesus draw us into relationship with God through the cross but Jesus redefines our relationship with each other at the foot of the cross – standing with the cross between us, Jesus intervenes.  Drawn back into the relationship with God our Father, Jesus the Christ turns us towards each other in a new way.  And God knows the world needs us to be with each other differently than we are at the moment.  Look as close as the cranky person next door or exclusion laws masquerading as religious freedom in several of these United States.  And look as far away as murder by plane crash in the French Alps or execution across religious differences at the Garissa University in Kenya.  We need every bit of help we can get to stand down and stand with each other.  As Anne Lamott writes, “You can safely assume that you’ve created God in your own image when it turns out that God hates all the same people you do.”[4]

At the cross, love is freely taken up for us and for the sake of the people next to us.  In the same moment, we have everything to do with what happened at the cross and we have nothing to do with it.  We are culpable AND we are passive spectators who are being handed a stark realization of our common powerlessness.  In this way, the cross cannot be used as a method to live life.  The cross is the way we experience life.  Longing for the spiritual, we are often stunned by its lack.  Yes, the cross is the way we experience life.  Humbled by our participation in a death on a cross, made confident through the self-sacrificing love of God.  The cross is radically inclusive of all people which necessarily includes you.

Jesus says, “It is finished.”  Can you hear the whisper?  Finished.  His final moment. All that’s left is to put him in a tomb and leave him there.[5]

[5] On Good Friday, cross and tomb are the focal point so that hope is reflected out of suffering that is real rather than as false optimism denying painful realities.