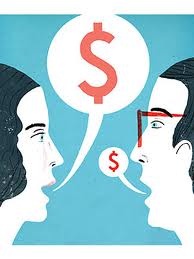 Mark 9:30-37 30 They went on from there and passed through Galilee. He did not want anyone to know it; 31 for he was teaching his disciples, saying to them, “The Son of Man is to be betrayed into human hands, and they will kill him, and three days after being killed, he will rise again.” 32 But they did not understand what he was saying and were afraid to ask him. 33 Then they came to Capernaum; and when he was in the house he asked them, “What were you arguing about on the way?” 34 But they were silent, for on the way they had argued with one another who was the greatest. 35 He sat down, called the twelve, and said to them, “Whoever wants to be first must be last of all and servant of all.” 36 Then he took a little child and put it among them; and taking it in his arms, he said to them, 37 “Whoever welcomes one such child in my name welcomes me, and whoever welcomes me welcomes not me but the one who sent me.”

How many of us have ever had the experience of saying something that we wished we hadn’t?  That moment where your whole inside goes, “Ugh…”  So much so, that you can feel it in the pit of your stomach.  Yup, I’m pretty sure that this is an almost universal experience.  For me, because I tend toward the chatty side, it happens with frustrating regularity.  And it’s just here in our text today that the disciples do the opposite – they stay silent; not once, but twice!  First they are silent because they were afraid to ask Jesus to clear up their lack of understanding and then they stay silent because Jesus names their humanity when he calls them on their arguing.  Their “Ugh” moment doesn’t even get to include speaking.  It just sits there in the pit of their stomach probably getting heavier as they walk along – falling back a bit to begin that arguing with one another.

They begin their arguing right after Jesus makes this big speech about what’s going to happen to him.  He talks about being betrayed, his murder and resurrection.  I picture the disciples listening attentively, perhaps even giving a nod or two to show they are paying attention and following along.  And then, they drop back a bit, and what do they do as they follow Jesus?  Argue.  They don’t even argue about what Jesus might have meant by his predication.  They argue about being the greatest.  Maybe they really don’t get it, perhaps arguing about the greatest as they wonder who will take over the leadership when Jesus goes down.  And Jesus, well, because he’s Jesus, knows exactly what they are doing.

I like to think Jesus knows what they are doing because it is simply what we, as people, do.  We follow along behind Jesus, not really sure what to make of these big faith claims in Jesus’ predication and very often afraid or uncomfortable to ask about what Jesus’ death and resurrection might mean in our own lives.  So we turn to each other and we argue.  We argue about all kinds of things but often the subtext, the argument beneath the argument, is about who is the greatest.

One of the ways in which we argue about being the greatest has to do with money.  There are obvious ways we do this in American culture, especially in a political year when we argue about taxes and government spending.  But there are more subtle ways we argue about being the greatest when it comes to money.  This can be so subtle for us we don’t tend to think about it as part of the argument we’re having.  It takes shape in whispers as we move through the world in our designated social class based on our income.  But it includes all the ways in which we look to money to tell us who we are and what we’re about.  Not as a conscious thought, but we look nonetheless.

And, suddenly, like the disciples in Mark, we are following behind Jesus but not looking at Jesus.  We begin looking to each other as we come up with our arguments.  One of the classic arguments begins with a deep suspicion of the connection between money and the church.  You hear this in comments all the time, maybe even in your own comments, that sound like, “All the church wants in my money.”  And this suspicion has real roots.

We were joking the other night at this congregation’s church Council meeting abut how fun it might be to hold a tongue-in-cheek ‘Indulgence’ sale.  Indulgences, you may recall, were a 16th century church innovation that cashed in on people’s fear for their loved ones’ eternal doom so that church buildings could be completed.  Indulgences were sold with the marketing line, “When a coin in the coffer sings, a soul from purgatory springs.”  Indulgences were a key fuel in the fury of Martin Luther’s 95 Theses, his arguments against the corruption in the church.  So, even as we had fun with the idea, someone made the comment about taking extreme care with such an attempt.  Because even, and maybe especially, we as the church can just as easily as anyone else find ourselves following behind Jesus, confessing him Lord, while arguing amongst ourselves about the greatest.

This gets me back to thinking about the disciples’ silence when they don’t understand.  To my mind, the silence when people want to ask a question but don’t becomes a pregnant silence.  So, because we’d be here all day if people started shooting out questions, I’m asking that everyone take a slip of paper out of the seatback of the chair in front of you.  And for about a minute, think about what you would ask Jesus about money if you could ask absolutely anything, and write it down on the piece of paper.  This question is purely for you – no group sharing or hand raising will be requested.  This means you can send that editor that lives in your head out for a coffee break.  Okay, ready, set, think and write… … … … …

I invite you to consider your question to Jesus that you just wrote down as a prayer this week.  You can simply add it to your prayers.  Or you may discuss it with people.  Or think of the question from time-to-time during the week.  See what comes up for you either as possible answers or perhaps yet another question.

I invite you into this time of asking questions because Jesus has made all of us free to ‘fire away.”  Sitting here, with the whole Bible at our fingertips, we know how the story plays out.  And it is in his death and resurrection that we are made free from the fear that would stop our questions from pouring out.  So that when there are incomprehensible ideas and tension, such as disciples experience, we turn to following Jesus only to find that, with scarcely a glace from us, Jesus is already there.