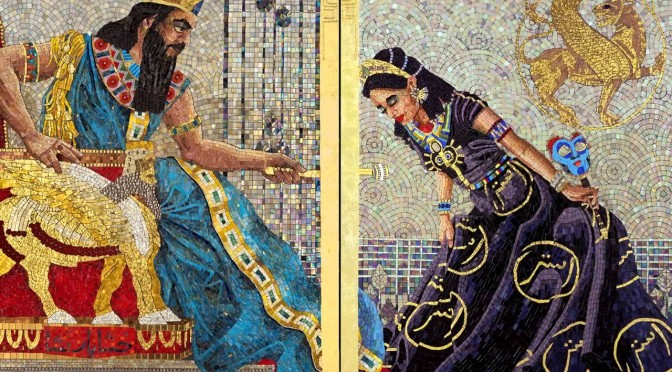 Esther 4:12-17 When they told Mordecai what Esther had said, 13 Mordecai told them to reply to Esther, “Do not think that in the king’s palace you will escape any more than all the other Jews. 14 For if you keep silence at such a time as this, relief and deliverance will rise for the Jews from another quarter, but you and your father’s family will perish. Who knows? Perhaps you have come to royal dignity for just such a time as this.” 15 Then Esther said in reply to Mordecai, 16 “Go, gather all the Jews to be found in Susa, and hold a fast on my behalf, and neither eat nor drink for three days, night or day. I and my maids will also fast as you do. After that I will go to the king, though it is against the law; and if I perish, I perish.” 17 Mordecai then went away and did everything as Esther had ordered him.

Romans 14:7-10 We do not live to ourselves, and we do not die to ourselves. 8 If we live, we live to the Lord, and if we die, we die to the Lord; so then, whether we live or whether we die, we are the Lord’s. 9 For to this end Christ died and lived again, so that he might be Lord of both the dead and the living.

John 14:25-27 [Jesus said to his disciples]  “I have said these things to you while I am still with you. 26 But the Advocate, the Holy Spirit, whom the Father will send in my name, will teach you everything, and remind you of all that I have said to you. 27 Peace I leave with you; my peace I give to you. I do not give to you as the world gives. Do not let your hearts be troubled, and do not let them be afraid.

I went to a play called “Sweet and Lucky” about a month ago.[1]  Not your usual play in which you walk into a theater, sit down, and watch the actors on a stage.  “Sweet and Lucky” guides the audience in small groups, out of sequence from each other, across many rooms and sets as it tackles the idea of memory and how it works.

A relevant aside, I just found out last week that the show’s New York director, Zach Morris, is a confirmed son of the Augustana congregation. I mean that in the ritual sense.  Years ago, he affirmed his baptism in the rite of Confirmation here. His mother Maggie and sister Katelynn continue to worship here regularly.  Maggie handed me an article last Sunday about the play.  Funny how things happen like that and a connection can be seen only in hindsight.

And that takes us back to the play and why it may be at least loosely relevant to the sermon today.  At one point, an actor asked me if I believe in luck.  I said, “No.” She then asked if I believe in fate.  I said, “No…I think there’s an option that we aren’t able to understand.”  Just her luck that she got to talk with me, eh?  But her questions are onto something.  We are meaning-making beings.  Things need to mean something. If they don’t mean something, we’re stymied.  If they mean something terrifying, we’re still stymied.  We throw everything we can at situations to find some kind of answer to feel better about them. Whether it’s luck, fate, karma, God’s will, free will, or something else I can’t think of at the moment. Things happen and we start asking “why?” We want answers.  We are answer mongers and meaning makers.  When things happen, either we find answers or we make them up.

This reasoning out the “why” is the surface appeal of the Book of Esther.  Esther is an orphan 500 years before Jesus.  Not just any orphan, she’s descended a few generations from the Jewish people who were rounded up in Jerusalem and carted off into Persia by the king of Babylon. Esther is adopted by her cousin Mordecai and raised as his own daughter.[2]

Through a series of circumstances, Esther becomes the Queen of Persia, married to King Ahasuerus.[3]  She remains a Jew but this secret is kept from even the king himself.  Then comes Haman, second in power only to the king.  Mordecai refuses to bow down to Haman so Haman plots to murder Mordecai, and I quote the Bible story here, “by giving orders to destroy, to kill, and to annihilate all Jews…”[4]

Mordecai catches wind of Haman’s orders to kill the Jews. What follows are a number of servant delivered messages between Mordecai and Esther.[5]  Mordecai challenges Esther to save her people. Esther argues back that the king could have her put to death if she shows up uninvited.  And then comes Mordecai’s message back to her, “Do not think that in the king’s palace you will escape any more than all the other Jews…Who knows? Perhaps you have come to royal dignity for just such a time as this.”

Esther’s story is cleaned up quite a bit for the G-rated worship musical the kids are preaching through this morning’s 10:30 worship. To get the full story takes reading this Bible book laced with dark humor and questionable outcomes. While reading, it’s engaging to wonder about your own life as reflected in Esther’s self-sacrificial courage, Mordecai’s righteous determination, Haman’s fearful self-preservation, and King Ahasuerus’ detached ignorance.

Esther’s story is meaningful and relevant to the current moment in the world. She begins in the royal court, a place of comfort tainted by episodic fear and indifference. Rattled by Mordecai’s truth, her acceptance of risking death has a self-sacrificial purpose – neither fatalistic nor nihilistic. She listens to him, formulates a dubious plan, and goes into action on behalf of her people.  And the parts of the story you just heard happen in only four short chapters with a little over half the book to go.

Mark George, my Hebrew Bible professor was asked why the stories in these earliest writings are the ones that remain.  Dr. George resisted pious or academic answers.  He said with high intensity, “Because they’re GOOD stories!”  He might have even had a fist in the air when he said it.  There was that much emphasis.  “Because they’re GOOD stories!”

They’re good partly because the stories they tell are about complicated people. Trusty Noah?  Read what happens after the flood when he builds a vineyard and makes wine.[7]  Faithful Abraham?  Lied about Sarah being his sister to save his own skin not once but twice![8] Biblical heroes are often as flawed as they are faithful.  That makes for good story.

It also makes for something more than a good story.  It means that we have a shot at seeing our particular iteration of flawed and faithful in the pages of the Good Book.

Esther is no exception to Dr. George’s “GOOD story” category.  In the face of Haman’s treachery and King Ahasuerus’ indifference, Esther is challenged to save her Jewish people, putting her life at risk to do so.  But the reality is that while we aspire to Esther, we’re regularly caught in moves that smack of King Ahasuerus’ ignorance or Haman’s power grab.  Comparing Esther’s self-sacrificial resolve to Christ’s self-sacrifice may get us a little further.  Today’s reading from the Gospel of John is good for this comparison.

In John’s Gospel, Jesus’ death on the cross is the inevitable outcome to his life-giving ministry.  Inevitable because the life he offers is one of mercy, freedom, and peace which is perceived as a threat by the people around him.  In his death no hand is raised against the people God so loves. Rather, Jesus is resolved to see it through. Resolve that ends in self-sacrifice on a cross.

Jesus’ resolute self-sacrifice means that Christians are neither nihilists nor fatalists.  Nihilists argue that life is meaningless. Fatalists argue that life is determined by an impersonal fate.  Paul’s words from his letter to the Romans reflect a Christian’s take on life – “We do not live to ourselves, and we do not die to ourselves. If we live, we live to the Lord, and if we die, we die to the Lord; so then, whether we live or whether we die, we are the Lord’s. For to this end Christ died and lived again, so that he might be Lord of both the dead and the living.”

The readings today from Esther, Romans, and John, offer slightly different perspectives on fear, death, and peace.  In John, Jesus promises peace as the One whose ultimate self-sacrifice on the cross is purposeful rather than nihilistic – gathering us around the tree of the cross, transforming death into life as well as our self-preservation and indifference into action for the sake of the world God so loves.