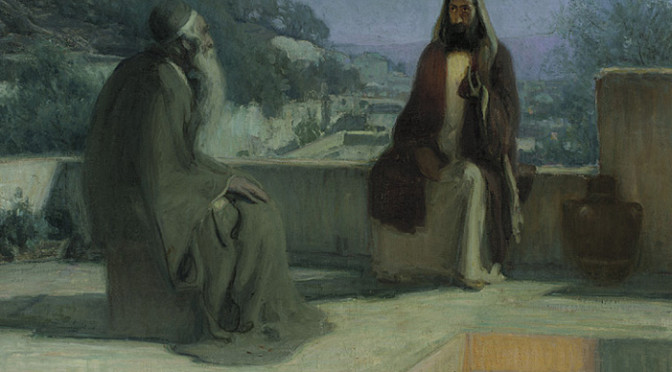 **sermon art: Jesus and Nicodemus by Henry Ossawa Tanner (1899), oil on canvas. “The story of Nicodemus visiting Christ at night spoke to African American worship habits that Tanner remembered from his youth: After emancipation, freed slaves continued to meet at night, as they had done when their masters had forbidden them to read the Bible (Mosby, Henry Ossawa Tanner, 1991).”

[sermon begins after Bible reading; Romans and Psalm reading at end of sermon]

John 3:1-17  Now there was a Pharisee named Nicodemus, a leader of the Jews. 2 He came to Jesus by night and said to him, “Rabbi, we know that you are a teacher who has come from God; for no one can do these signs that you do apart from the presence of God.” 3 Jesus answered him, “Very truly, I tell you, no one can see the kingdom of God without being born from above.” 4 Nicodemus said to him, “How can anyone be born after having grown old? Can one enter a second time into the mother’s womb and be born?” 5 Jesus answered, “Very truly, I tell you, no one can enter the kingdom of God without being born of water and Spirit. 6 What is born of the flesh is flesh, and what is born of the Spirit is spirit. 7 Do not be astonished that I said to you, “You must be born from above.’ 8 The wind blows where it chooses, and you hear the sound of it, but you do not know where it comes from or where it goes. So it is with everyone who is born of the Spirit.” 9 Nicodemus said to him, “How can these things be?” 10 Jesus answered him, “Are you a teacher of Israel, and yet you do not understand these things? 11 “Very truly, I tell you, we speak of what we know and testify to what we have seen; yet you do not receive our testimony. 12 If I have told you about earthly things and you do not believe, how can you believe if I tell you about heavenly things? 13 No one has ascended into heaven except the one who descended from heaven, the Son of Man. 14 And just as Moses lifted up the serpent in the wilderness, so must the Son of Man be lifted up, 15 that whoever believes in him may have eternal life. 16 “For God so loved the world that he gave his only Son, so that everyone who believes in him may not perish but may have eternal life. 17 “Indeed, God did not send the Son into the world to condemn the world, but in order that the world might be saved through him.

Very few of us are gifted the amount of faith we wish we had. So much so that I wonder if that’s simply a normal part of faith – wishing we had more of it. It can be high praise to be described as having a strong faith. Not many people easily admit when their faith is flimsy or freshie or completely fails them – especially after reading the Apostle Paul’s letter to the Romans that makes a big deal out of the righteousness of faith. Nicodemus has often been considered a role model of flimsy faith. “Nicodemus just doesn’t get it,” the preachers gonna preach. Well to that, I say, shake it off.[1]

Look at what Nicodemus does and doesn’t do. He does seek Jesus out. He doesn’t shame Jesus in the temple with other religious leaders. He does acknowledge that Jesus is from God and that Jesus’ signs reveal the presence of God. He doesn’t try to give a negative explanation for Jesus’ signs. He does call him a teacher. He doesn’t succumb to name calling. Respect is evident even in Nicodemus’ approach. In Rabbinic tradition, debate and questioning are a sign of respect. 2,000 years ago in Jewish Mishnah, the House of Hillel and the House of Shimmai were engaged in “Machloket L’shem Shemayim,” meaning “Disagreement for the sake of heaven.”[2] Nicodemus and Jesus are participating in the kind of faithful exchange that continues to thrive today between our Jewish cousins in the faith. We’d do well to follow their example and reject the idol we make of unanimous agreement. Disagreement for the sake of heaven preserves the minority report along with the prevailing one because both bear fruit for ongoing learning over time.[3]

Jesus and Nicodemus give us their example as two teachers questioning and debating each other. Jesus’ words are more like Wisdom teaching that doesn’t give exact answers but leads to more questions, to deeper and deeper layers of understanding.  The opening words of the Gospel of John tell us that God’s love for the world brings life and light in the Word made flesh in Jesus. Here in his story with Nicodemus, we’re also reminded in verse 17 that Jesus came not to condemn the world. Oddly enough though, Jesus followers can turn to judgment just as quickly as anyone else. I don’t know if it makes us feel smarter or more in control but judging each other seems to be a go-to move for most humans. Christians often take the good Lord’s name in vain by judging and condemning people who disagree with them in the name of God. But Jesus’ posture towards Nicodemus in this story is one that I wish the church catholic, God’s whole universal church, would embody in our posture towards each other in the faith and towards people of other faiths or non-faiths.  An audacious goal for the church and certainly not one that can simply be announced and made so as if we were Captain Picard on the Star Ship Enterprise.[4] What, then, are well-meaning church folk to do to adopt Jesus’ posture of compassionate teaching and not condemnation?  You didn’t think I’d come without an idea, did you?

The Jesus Prayer dates back to at least the 5th century in Egypt. It goes like this…

The Jesus Prayer can be used in a daily practice of contemplative prayer like the one recommended by Richard Carter in his book, The City is My Monastery. [6] Breathe in to the first part “Lord Jesus Christ…”, hold your breath for “Son of God…” and breath out on the last part “have mercy on me, a sinner.” This is not a prayer I’ve prayed as any kind of regular spiritual practice prior to this Lenten season. I now pray it regularly along with the breathing. This is true especially when I’m awake in the middle of the night or find myself overthinking politics, or viruses,  or kids in cages, or tornadoes in Tennessee, or my own young adult children. I pray it because it reminds me that God is present in Jesus and that God shows me mercy first.

Reflecting on that prayer, I’ve wondered about our own experience of God’s mercy allowing us to be merciful with ourselves and with other people. And that perhaps in this small individual practice and others like it along with our worship together we could actually be a church whose posture towards other folks mimics Jesus’ posture towards the people he encountered in his ministry.

Nicodemus turns up again, you know. Twice more in the Gospel of John.  In Chapter 7, he speaks up for Jesus when other religious leaders were trying to have him arrested without a just hearing.[7] Then again in Chapter 19, Nicodemus appears with 100 pounds of spices to prepare Jesus’ body for burial.  We don’t hear a confession of faith from Nicodemus but we do witness these additional two moments after he and Jesus had their faithful debate. I like to think Nicodemus heard things that made him question his own motives and shook his assumptions about faith. He is a bit of a hero for those of us who are drawn slowly into faith through ordinary days and dark nights of the soul. There is no single grand epiphany for Nicodemus or for many of us. Just a gradual journey that winds and meanders while pointing us in the direction of Jesus one shaken assumption at a time.

There are many things that happen in the world that shake our assumptions. You name the change, a good change or a bad change, and there are faithful people struggling to understand their faith in the midst of it. Being called to faith doesn’t mean we’re immune to change or our reactions to change. Oh, how I wish it did. A few years ago, I was sitting in my counselor’s office and, in all earnestness, told him that I just wanted a couple of months where things didn’t change. I don’t remember exactly when, but it wasn’t the first time I’d been worn out by a series of rapid-fire changes. He did what he often does and asked me whether or not I’d like to hear what he thought about my comment. To which I usually say “yes.” He leaned forward in his chair and said, “Life IS change.” Which, of course, I know but apparently had to hear again.

To that, we can add that Christian life IS change. What else would we expect?! It’s what God does. That much seems clear from Jesus’ teaching to Nicodemus as we are to be born from above. Another translation of the Greek is to be born anew. Transformation is a churchy word but it’s really just a fancy word for change, for being born anew. In that Spirit, receiving this blessing:

As you are born anew each day through the daily promise of your baptism, may you be given the grace, strength, and wisdom as your assumptions are challenged, and may you encounter the wideness of God’s mercy over your going out and coming in from this time onward and forevermore.[8] Amen.

hymn song after the sermon:

There’s a wideness in God’s mercy
like the wideness of the sea;
there’s a kindness in his justice,
which is more than liberty.
There is welcome for the sinner,
and more graces for the good;
there is mercy with the Savior;
there is healing in his blood.

There is plentiful redemption
in the blood that has been shed;
there is joy for all the members
in the sorrows of the Head.

For the love of God is broader
than the measure of man’s mind;
and the heart of the Eternal
is most wonderfully kind.
If our love were but more faithful,
we should take him at his word;
and our life would be thanksgiving
for the goodness of the Lord.

[4] Star Trek, The Next Generation, “Make It So” Compilation. https://www.youtube.com/watch?v=FaLyasJPyUU