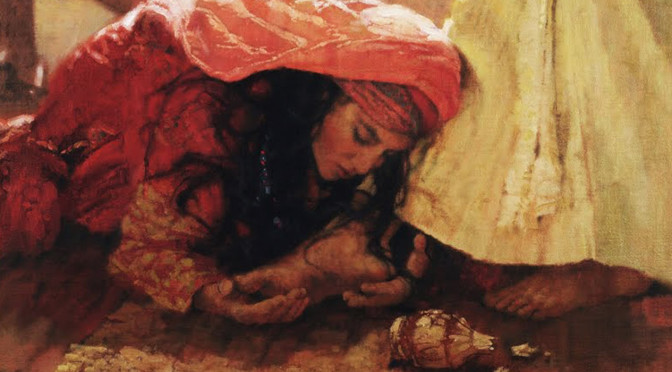 [sermon begins after the Bible story]

John 12:1-8 Six days before the Passover Jesus came to Bethany, the home of Lazarus, whom he had raised from the dead. 2 There they gave a dinner for him. Martha served, and Lazarus was one of those at the table with him. 3 Mary took a pound of costly perfume made of pure nard, anointed Jesus’ feet, and wiped them with her hair. The house was filled with the fragrance of the perfume. 4 But Judas Iscariot, one of his disciples (the one who was about to betray him), said, 5 “Why was this perfume not sold for three hundred denarii and the money given to the poor?” 6 (He said this not because he cared about the poor, but because he was a thief; he kept the common purse and used to steal what was put into it.) 7 Jesus said, “Leave her alone. She bought it so that she might keep it for the day of my burial. 8 You always have the poor with you, but you do not always have me.”

There are Bible moments so absurd and disruptive that they are difficult to imagine.  Mary’s anointing of Jesus is one of them.  Oil and hair and fragrance are dripping, cascading, and emanating.  There is no ignoring this moment if you’re around that dinner table.

Lazarus is there, having just recently been raised from the dead by Jesus.  His story is told in the chapter just before the reading today.[1]  We can imagine this dinner as a celebration.  Lazarus is back and people are ready to party.  His sister Martha is serving. Judas is there enjoying the circle of friendship as a disciple of Jesus.  Then there’s Lazarus’ other sister, Mary of Bethany. Her exuberance knows no bounds. Her adoration of Jesus must be expressed.  And so it goes, with dripping oil, cascading hair, and emanating fragrance.  A feast of the senses at a table set for dinner.

How are we to understand this adoration she pours on Jesus?  The purity and price of the nard are emphasized.  A rare, imported Himalayan treasure.  A year’s wages.  The nard’s purity and price lead me to wonder about the purity of Mary’s adoration and the cost to herself as she disrupts the dinner party.

One cost is Judas’ poor opinion.  Judas feels free to give his opinion. He demeans her adoration with pious words.  He attempts to put her into her place and uses the poor to do so.  His argument is a vulgar appropriation of the poor – using them as a means to an end.  Jesus is having none of it and slams Judas’ argument.  There are plenty of other Jesus stories that assure us of his determination to eradicate poverty and not leave the poor to their subsistence or our hands clean of their plight.  Regardless of Jesus’ intervention, what does Judas’ poor opinion matter?  He can put it into pious language all he wants.  Mary’s joy will not be stolen by him or anyone else.  Judas’ disapproval is but a pittance.

A few years ago, a fellow seminarian said about Mary’s anointing of Jesus that if he had long hair this is what he would do for someone similarly important to him.  His comment opens the story slightly differently as the imagination plays across gender and time between Mary of Bethany and our moment in time today.  What does adoration look like on a personal level this century?  Set celebrity culture aside for a moment.  Groupies are a different conversation. Mary is in her home. Jesus is known to Mary and her family personally over the course of time.  Her adoration of Jesus is pure and costly.  And she is breaking gender barriers all over the place.  She is a woman of her time whose hair should be tucked away.  She should not be touching a man in the company of others.  In fact, it is life-threatening for her to do so. He, a man, would ordinarily rebuke her like Judas does.  Yet, there they are, oil dripping, hair cascading, and fragrance emanating.

There is something else happening in parallel to Mary’s adoration.  After raising Lazarus from the dead, Jesus is now a target for death himself. The story of Lazarus raised from the dead is followed by the plot developing to arrest Jesus and kill him. [2] And then we get this dinner party. Mary of Bethany calls Jesus “Lord” in previous texts and now anoints him.  Jesus talks openly about his death when he says to Judas, “Leave her alone…She bought it so that she might keep it for the day of my burial.”[3]  The implication is that she is anointing him for his death.

This past week I received a phone call from a man who asked me to come baptize his one month old son who was on life support.  They were at Children’s Hospital having been flown in by Flight for Life.  He was not expected to live. We arranged for me to come out that evening.  Via text, the father rescheduled our time for the following morning since the baby’s mother was arriving in the middle of the night from out-of-state.  When I arrived, they were both in the room along with the baby’s grandparents.

We talked briefly.  I assured them that, despite whatever we thought we were doing, this moment is first and foremost about God’s promise to be present for their baby even in this most painful time.  Then, with water from a clay bowl, this little one was baptized in the name of the Father, and of the Son, and of the Holy Spirit.  His head dried with the linen baptismal napkin from the church.  I told him he was sealed by the Holy Spirit and marked with the cross of Christ forever while making the sign of the cross on his forehead with oil-lotion scented with frankincense and myrrh.

After this little one was baptized, I handed the parents the un-lit baptismal candle and told them that his light was shining even in his short life and that God is with him.  The family and I shared the bread and wine of communion and then the grandfather asked if I would give this little one “last rites.”  I briefly explained that I would pray what we call the “Commendation of the Dying.” And so we did.  He died within the next few days.

The anointing of this little one in baptism echoes with Mary’s anointing of Jesus before he entered Jerusalem for the last time.  It also echoes the prayer and anointing for healing that you can choose to receive during this worship service.  The Health Minister will anoint your hands with olive oil and say this prayer for you: “May our Lord Jesus Christ uphold you and fill you with his grace, that you may know the healing power of his love…Amen.”

Lent invites reflection on our own baptism.  We reflect on the things that are being “put to death” in us so that something else, something we cannot imagine on our own, may come to life in us by the power of the Holy Spirit through each of our baptisms.  This is part of the healing for which we pray.

Jesus is about life and living.  Lazarus discovered it first-hand. Mary of Bethany adores and anoints Jesus.  She adores and anoints him for the life he brings even as she prepares him for the death he will face because there are those who find his life threatening.  But, even in Lent, we are an Easter people – celebrating that Jesus brings life even through the darkest times by way of his death on a cross.  We remember this promise at funerals with these words, “We were buried therefore with him by baptism into death, so that as Christ was raised from the dead by the glory of the Father, we too might live a new life.”[5]  This new life is for today.  For you.  Our baptism is God’s daily promise by way of a cross and a savior in whom “we live and move and have our being.”[6]   All glory be to God for this indescribable gift![7]

[2] John 11:45-57 – These verses tell the story of the plot to arrest Jesus and put him to death for bringing Lazarus to life.