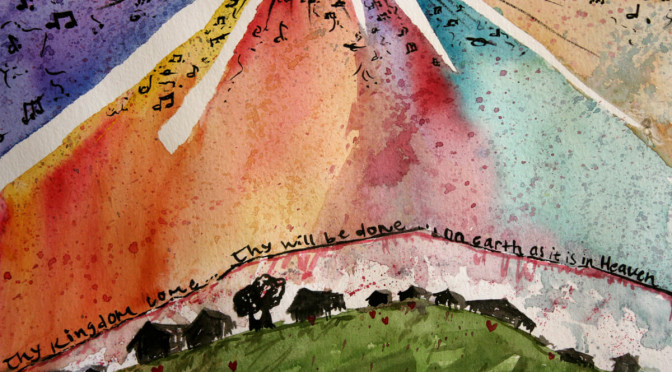 [sermon begins after two Bible readings; the two other readings may be found at the end of the sermon]

Romans 5:1-10   Therefore, since we are justified by faith, we have peace with God through our Lord Jesus Christ, 2 through whom we have obtained access to this grace in which we stand; and we boast in our hope of sharing the glory of God. 3 And not only that, but we also boast in our sufferings, knowing that suffering produces endurance, 4 and endurance produces character, and character produces hope, 5 and hope does not disappoint us, because God’s love has been poured into our hearts through the Holy Spirit that has been given to us. 6 For while we were still weak, at the right time Christ died for the ungodly. 7 Indeed, rarely will anyone die for a righteous person—though perhaps for a good person someone might actually dare to die. 8 But God proves his love for us in that while we still were sinners Christ died for us. 9 Much more surely then, now that we have been justified by his blood, will we be saved through him from the wrath of God. 10 For if while we were enemies, we were reconciled to God through the death of his Son, much more surely, having been reconciled, will we be saved by his life.

John 18:33-38  Then Pilate entered the headquarters again, summoned Jesus, and asked him, “Are you the King of the Jews?” 34 Jesus answered, “Do you ask this on your own, or did others tell you about me?” 35 Pilate replied, “I am not a Jew, am I? Your own nation and the chief priests have handed you over to me. What have you done?” 36 Jesus answered, “My kingdom is not from this world. If my kingdom were from this world, my followers would be fighting to keep me from being handed over to the Jews. But as it is, my kingdom is not from here.” 37 Pilate asked him, “So you are a king?” Jesus answered, “You say that I am a king. For this I was born, and for this I came into the world, to testify to the truth. Everyone who belongs to the truth listens to my voice.” 38 Pilate asked him, “What is truth?”

There’s a kind of conversation that happens when two people think they’re clear as a bell and really there are two different conversations happening at the same time.  My husband and I had one of those just the other day.  Rob had to leave the house early to meet clients in Cheyenne.  Before he hopped in the shower, he said to me, “Don’t turn off the coffee pot, okay?”  My clear-as-a-bell reply was, “How many cups of coffee have I had?”  He tipped his head a bit at me with that classic expression that silently asks, “Whaaat?!”  I made perfect sense to myself because I was wondering how likely it would be that I would even think about turning off the coffee at that early hour.  Meanwhile, Rob just needed quick reassurance that the coffee pot would remain on while he rallied to leave.  Twenty-seven years into our relationship and there are still moments of confusion in the small and big conversations.

The dialogue between Jesus and Pontius Pilate falls into the big conversation category.  Any prior relationship or benefit of the doubt or warm laughter between them is unlikely.  This is serious business. Jesus is on trial.  Pilate summons him to a private conversation after questioning the people who brought him in.  Jesus is brought to Pilate for a legal verdict.  Honestly?  He’s brought to Pilate for a guilty verdict. Pilate is caught between the crowd, Roman law, job security, and Jesus’ innocence. Whatever you may think of his actions, Pontius Pilate is a compelling character. His question about truth is compelling.  And it’s a very old question.  “What is truth?”  Great question all on its own.  Philosophers and neuroscientists have a field day talking about the origins of reality and truth.

“What is truth?” is also a great question when it comes to God’s kingdom and will.  There are lots of people who invoke God’s will for all kinds of things. The good that happens?  God’s will. The bad that happens?  God’s will. I’m more cautious when it comes to claiming God’s will.  This caution is due to something called bondage of the will.  Bondage of the will means that the human inclination is to think about the self first and think about everything else second. Including God.  Not only are we anthropocentric thinking that humans are the center of all reality; I am self-centered thinking that I am origin of truth.  There’s a Latin expression for this self-centeredness. Incurvatus in se. The expression means that we are curved in on ourselves.  In Christianity, we could say that the cross pulls our noses out of our belly buttons aligning us with God and God’s kingship.

God’s kingship brings us to the second petition of the Lord’s Prayer.  “Thy kingdom come.”  Martin Luther writes, “In fact, God’s kingdom comes on its own without our prayer, but we ask in this prayer that it may also come to us.”[1]  To think about the kingdom, we look at the king.  Pilate asks Jesus, “Are you the King of the Jews?” Jesus deflects the question by answering with a question.  Pilate then asks Jesus, “What have you done?”  Jesus responds, “My kingdom is not from this world…”  Ah, Pilate thinks he has Jesus now.  “So you ARE a king?”  Again, Jesus hedges his answer by saying that he “came into this world to testify to the truth.”  Once again, two people having two different conversations at the same time.  Although, for our purposes today, Jesus does point us toward his kingdom.

Jesus’ kingdom talk is interesting.  Pilate isn’t off-base asking about a king when Jesus testifies that his kingdom is not from this world.  Asking for the identity of the king makes sense.  The problem is that this king is unlike other kings.  This king is standing trial in front of an insignificant governor of an obscure Roman outpost.  This king isn’t rallying power to fight and win.  This king is surrendering.  He is preparing for the ultimate self-sacrifice on behalf of friends and enemies alike.  This king reveals the breadth of divine power poured out in the depth of divine love.[2]  Jesus testifies to his kingdom with unexpected behaviors for a king. Unexpected behaviors for a king but perhaps not unexpected behaviors for THIS king.  Remember that this king spent his time on earth meeting with outcasts and strangers, healing the untouchables, feeding the hungry, and offending the powers that be by calling for love of God, neighbor, and enemy.  Remember that he ends up offending almost everyone.  Remember that he gets killed for his kingdom’s work, proclamation, and ministry.

In his ministry, Jesus teaches us to pray the third petition, “Thy will be done on earth as it is in heaven.”  Martin Luther writes, “In fact, God’s good and gracious will comes about without our prayer, but we ask in this prayer that it may also come in and among us.”[3] Dr. Alicia Vargas writes that this in this prayer “we acknowledge our obedience to divine authority.”[4]  We pray that our own will yields to God’s will as sovereign, as king.

God’s kingdom and will seem to be revealed through Jesus’ kingdom ministry and inevitable execution which gives one possibility as we pray for God’s will. God’s will is for God to love us.  God’s will is first about God and what God is doing through Jesus by the power of the Holy Spirit.  God creates, sustains, shows up, dies, and lives again in love for us.  In verse 5 of the Romans reading, the Apostle Paul says it this way, “God’s love has been poured into our hearts through the Holy Spirit.”[5]  The love of God is revealed in and among us…the church…the body of Christ in the world. God commissions us through baptism to the ministry and proclamation of this good news.

Look around these pews.  God loves all you people.  Thanks be to God.  Amen.

[2] Dr. Craig Koester said this repeatedly during in his class on The Gospel of John, Fall 2010.  Luther Seminary.

Jeremiah 29:11-13a  For surely I know the plans I have for you, says the Lord, plans for your welfare and not for harm, to give you a future with hope. 12 Then when you call upon me and come and pray to me, I will hear you. 13 When you search for me, you will find me.

Psalm 145:8-17   The Lord is gracious and merciful, slow to anger and abounding in steadfast love.  9 The Lord is good to all, and his compassion is over all that he has made. 10 All your works shall give thanks to you, O Lord, and all your faithful shall bless you. 11 They shall speak of the glory of your kingdom, and tell of your power, 12 to make known to all people your mighty deeds, and the glorious splendor of your kingdom. 13 Your kingdom is an everlasting kingdom, and your dominion endures throughout all generations. The Lord is faithful in all his words, and gracious in all his deeds. 14 The Lord upholds all who are falling, and raises up all who are bowed down. 15 The eyes of all look to you, and you give them their food in due season. 16 You open your hand, satisfying the desire of every living thing. 17 The Lord is just in all his ways, and kind in all his doings.