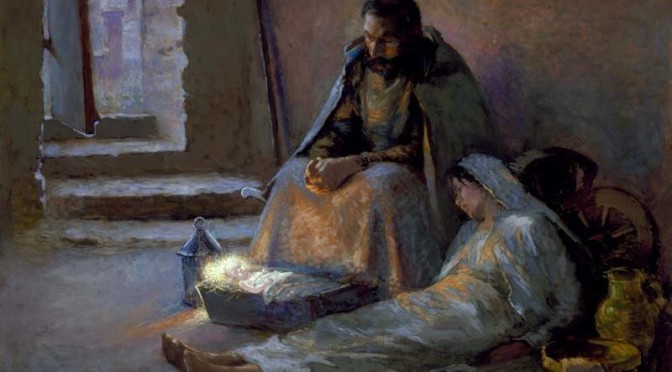 John 1:1-14 In the beginning was the Word, and the Word was with God, and the Word was God. 2 He was in the beginning with God. 3 All things came into being through him, and without him not one thing came into being. What has come into being 4 in him was life, and the life was the light of all people. 5 The light shines in the darkness, and the darkness did not overcome it. 6 There was a man sent from God, whose name was John. 7 He came as a witness to testify to the light, so that all might believe through him. 8 He himself was not the light, but he came to testify to the light. 9 The true light, which enlightens everyone, was coming into the world. 10 He was in the world, and the world came into being through him; yet the world did not know him. 11 He came to what was his own, and his own people did not accept him. 12 But to all who received him, who believed in his name, he gave power to become children of God, 13 who were born, not of blood or of the will of the flesh or of the will of man, but of God. 14 And the Word became flesh and lived among us, and we have seen his glory, the glory as of a father’s only son, full of grace and truth.

In those hope-filled moments and hours before a baby arrives, time slows down. One breath, then the next, and then the next.  Breath – hope – breath – hope… Breathing paced around a woman’s body doing the work of labor.  Beyond breath, muscles that aren’t doing the work of birthing can be rested in between contractions that run on their own timing with increasing urgency.  People around the birthing mother can make all the difference in mood and tricky delivery moments with umbilical cords and pushing at the right times, but the bottom line is that the baby arrives in its own time, refocusing our attention from mother to child.  Taking its first breath. Crying its first cry.  Swaddled in its first cloths.  Held in its first arms.

Here we are, Christmas Day, remembering when Jesus was born in time, focusing our attention on one small, holy, hope-filled family.  Mary who labored and birthed as a new mother.  Joseph who stood by as an earthly father.  Jesus who arrived, breathed, cried, and was cradled in a manger and his mother’s arms.  This is the story we sing about at Christmas. The story in the Gospel of Luke that has all the memorable characters including angles, shepherds, and sheep.  The story where God shows up in time in what we call the incarnation – God taking human form to be the long-promised Emmanuel, God with us.  Christmastime is about God showing up at a particular moment in time.  It’s about the God of history.  The God of history that made promises through Abraham and Moses and then expanded those promises to all people with the birth of Jesus who is hope cradled in history.

History is something we like to know and investigate.  History is time-bound.  History makes us hope for Johnny-on-the-spot reporting so we can know things for certain.  This hope turns into things like the song, “Mary Did You Know?”  We want to know what Mary knew and when she knew it, the story behind the history.  Truly, though, we know so little even as we hope for so much.  Even the four gospel writers are somewhat contradictory in their stories.[1]   Which brings us to the Gospel of John.

The Gospel of John opens with the same words as Genesis, the first book in the Bible.  “In the beginning…”  To paraphrase Genesis, in the beginning all was formless void in deep darkness until there was also light.[2]  John writes, “In the beginning was the Word, and the Word was with God, and the Word was God…in him was life, and the life was the light of all people…The light shines in the darkness, and the darkness did not overcome it.…and the Word became flesh and lived among us, and we have seen his glory…full of grace and truth.”[3]   If Luke gives us hope and history, John gives us hope and mystery with his cosmic poetry.  Talk of Word made flesh is full of hope. John’s “Word made flesh” language catches our attention because, well, who talks like that?! High stakes apparently call for attention grabbing poetry.

The stakes are high because we’re talking about God keeping God’s promise to be present in and for the world through the act and sustenance of creation.  Our life, our breath, our hope rest in these promises which are revealed from the grace of creation through the grace of God’s new creation in Jesus through the grace of his unconditional love for all people regardless of class, gender, or race through the grace of his death on the cross to the ultimate grace of new life together in the great cloud of witnesses from all times and places.  This litany of grace is hope.  As I wrote it, and as I speak it now, I inhale it like air that gives life.  We are not left to our own devices and the messes we make of things.  We are called into the grace of God who makes new life possible.  From cradle to cross to new life, there is the hope and mystery of God’s presence in the midst of our pain, hope and mystery of God infusing our day-to-day moments so that our joy may be complete, and hope and mystery of being with our loved ones again one day.

In those days a decree went out from Emperor Augustus that all the world should be registered. 2 This was the first registration and was taken while Quirinius was governor of Syria. 3 All went to their own towns to be registered. 4 Joseph also went from the town of Nazareth in Galilee to Judea, to the city of David called Bethlehem, because he was descended from the house and family of David. 5 He went to be registered with Mary, to whom he was engaged and who was expecting a child. 6 While they were there, the time came for her to deliver her child. 7 And she gave birth to her firstborn son and wrapped him in bands of cloth, and laid him in a manger, because there was no place for them in the inn.

8 In that region there were shepherds living in the fields, keeping watch over their flock by night. 9 Then an angel of the Lord stood before them, and the glory of the Lord shone around them, and they were terrified. 10 But the angel said to them, “Do not be afraid; for see—I am bringing you good news of great joy for all the people: 11 to you is born this day in the city of David a Savior, who is the Messiah, the Lord. 12 This will be a sign for you: you will find a child wrapped in bands of cloth and lying in a manger.” 13 And suddenly there was with the angel a multitude of the heavenly host, praising God and saying, 14 “Glory to God in the highest heaven, and on earth peace among those whom he favors!”

[15 When the angels had left them and gone into heaven, the shepherds said to one another, “Let us go now to Bethlehem and see this thing that has taken place, which the Lord has made known to us.” 16 So they went with haste and found Mary and Joseph, and the child lying in the manger. 17 When they saw this, they made known what had been told them about this child; 18 and all who heard it were amazed at what the shepherds told them. 19 But Mary treasured all these words and pondered them in her heart. 20 The shepherds returned, glorifying and praising God for all they had heard and seen, as it had been told them.]