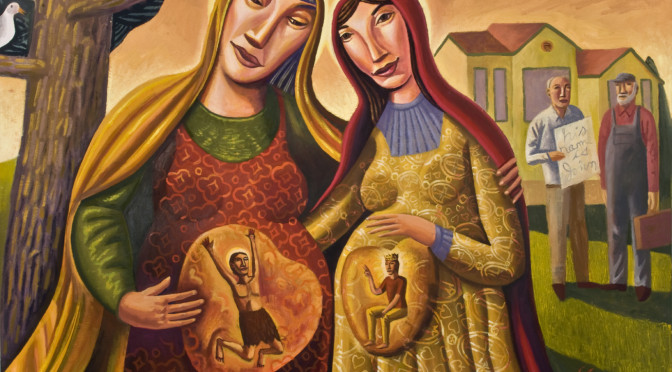 Luke 1:39-45 [46-55]  In those days Mary set out and went with haste to a Judean town in the hill country, 40 where she entered the house of Zechariah and greeted Elizabeth. 41 When Elizabeth heard Mary’s greeting, the child leaped in her womb. And Elizabeth was filled with the Holy Spirit 42 and exclaimed with a loud cry, “Blessed are you among women, and blessed is the fruit of your womb. 43 And why has this happened to me, that the mother of my Lord comes to me? 44 For as soon as I heard the sound of your greeting, the child in my womb leaped for joy. 45 And blessed is she who believed that there would be a fulfillment of what was spoken to her by the Lord.”

46 And Mary said, “My soul magnifies the Lord, 47 and my spirit rejoices in God my Savior, 48 for he has looked with favor on the lowliness of his servant. Surely, from now on all generations will call me blessed; 49 for the Mighty One has done great things for me, and holy is his name. 50 His mercy is for those who fear him from generation to generation. 51 He has shown strength with his arm; he has scattered the proud in the thoughts of their hearts. 52 He has brought down the powerful from their thrones, and lifted up the lowly; 53 he has filled the hungry with good things, and sent the rich away empty. 54 He has helped his servant Israel, in remembrance of his mercy, 55 according to the promise he made to our ancestors, to Abraham and to his descendants forever.”

Ohhhh, cat fight!  Well, not really.  Not at all actually.  Mary and Elizabeth are two women in it together.  Both have slightly different jobs that work toward the same vision.  After Mary’s surprise pregnancy, she makes haste to the hills to her relative Elizabeth who is already six months pregnant in her old age.  Later we learn her visit to Elizabeth lasted about three months.[1]  Perhaps Mary was there when John was born to Elizabeth and Zechariah – helping her aging relative with a difficult labor and delivery and then heading home as her own belly grew heavy with pregnancy.  This is no small relationship between the two women.  In a world that often pits women against each other, imagining competition where there isn’t any, here we have one of many examples in which competition is simply not the case.  Not only was Mary welcomed by Elizabeth and the baby inside of her.  Mary was celebrated by them.  The baby leaped in Elizabeth’s womb and she was filled with the Holy Spirit to proclaim to Mary, “Blessed are you among women, and blessed is the fruit of your womb.”  Celebration, indeed.

The celebration continues after Elizabeth’s joyous welcome with Mary’s psalm in response.  Psalms are a form of song in the Bible. They aren’t necessarily a location in one book of the Bible.  Psalm songs in Luke lead us to up to and beyond cradle’s edge.  In addition to Elizabeth and Mary, the priest Zechariah sings of God’s faithfulness after the birth of his son who becomes John the Baptist, the angels sing to shepherds in a field of good news for all people, and the prophets Simeon and Anna praise God’s mercy for all people.[2] Their songs celebrate the faithfulness of God in the One soon to be cradled in a manger and his mother’s arms.  Song is a way to remember. Songs get trapped in our head differently and become available in our minds at times when other words fail us.  Songs of full of faith and Christmas promise can sustain our faith and remind us of what we easily forget in the day – that the world and our connection with other people is to be celebrated by way of God’s imagination not our own imagined state of competition.

In her psalm, Mary praises God for humbling the proud, bringing down the powerful, lifting the lowly, and feeding the hungry.  One reaction to Mary’s psalm might be vengeful if you’re exhausted by oppression and survival. Another reaction to her psalm might be dread if you hear you’re about to lose something.  In a world that often pits people against each other, inciting competition, categorizing winners and losers, Mary’s psalm can be heard as either/or categories – either you’re the powerful at the top waiting to be toppled or you’re the lowly at the bottom waiting for your turn to be at the top.  For God’s sake, we know what happens to that cradled baby Jesus who grows into the ministry celebrated by his mother’s psalm.  The competition perceived by the political and religious powers took Jesus to trial and death on a cross.  But let’s remember for a moment, that the cross was good news both for the criminal who hung next to Jesus and for the Roman centurion nearby who praised God and confessed truth.[3]  Not either/or categories – both/and – all!

Okay, I’ve dabbled at the cross long enough. Let’s return to the cradle’s edge, shall we?  Pregnant expectation is where we’re at with Mary and Elizabeth.  Even the baby in Elizabeth’s belly is jumping for joy.  The women are joyous and hopeful as they greet each other.  Their psalms preach hope and promise, a vision jump-started by the Holy Spirit.  Two women, both preaching, both celebrating new life in the form of a baby but not yet a baby born.  Another word for this is hope.

Hope is my word for the church year. I chose it at the end of November before Advent began.  I chose the word hope as an antidote to the seemingly endless messages of despair.  With a word chosen to focus faith, I have a better shot at seeing life through the lens of God’s imagination and promise rather than human frustration and despair.  I have a better shot at living and sharing the hope that is within us by the power of faith.  Elizabeth and Mary’s moment is a case in point.  Mary left town in a hurry to go see Elizabeth.  She had a lot to fear in town.  Betrothed but not yet married to Joseph, young and pregnant, facing potential backlash from her community, she walks through Zechariah’s front door into safety and celebration with Elizabeth.  I imagine Mary showing up at Elizabeth’s home with the fatigue and nausea common to the first trimester of pregnancy and perhaps with some worry about the future.  Elizabeth’s Holy Spirit welcome is like a fresh breeze that smooths Mary’s furrowed brow and blows the dust off of her traveling feet and inspires Mary’s response in the Magnificat.

If Mary’s response is anything, it’s a word of hope. So much more than greeting card worthy, the Magnificat is bold, rebellious, and full of joy.  It’s hope-filled because, as we’ll hear in a few days, this is good news of great joy for ALL people.[4]  Which means that the mighty cast down and the lowly brought up stand together with each other by the power of Jesus.  It’s not about putting the lowly in the mighty category and the mighty in the low to simply repeat the same bad news.  Mary’s psalm births the possibility that the baby growing inside of her will lead us into love that connects rather than competes.  Not sentimental love where we pat each other on the head and wish each other good luck.  Rather, it’s a love that means seeing each other as human relatives, celebrating each other as Mary and Elizabeth did.  Sometimes it’s a compassionate love that soothes and consoles us within the cradle of Christ’s presence.  Sometimes it’s a convicting love that helps us understand when we are in the wrong from the courage gained by Christ’s cross.  Mary’s psalm afflicts those of us who are comfortable while comforting those of us who are afflicted.  The cradle and the cross reveal a lot about us.

But mostly the cradle and the cross reveal the Christ.  From cradle through cross to new life, Jesus is grace that tells the truth about ourselves and each other, bending fear into courage and transforming hatred into love so that we live as people with hope.

[4] Luke 2:10-12 But the angel said to [shepherds], “Do not be afraid; for see—I am bringing you good news of great joy for all the people: 11 to you is born this day in the city of David a Savior, who is the Messiah, the Lord. 12 This will be a sign for you: you will find a child wrapped in bands of cloth and lying in a manger.”