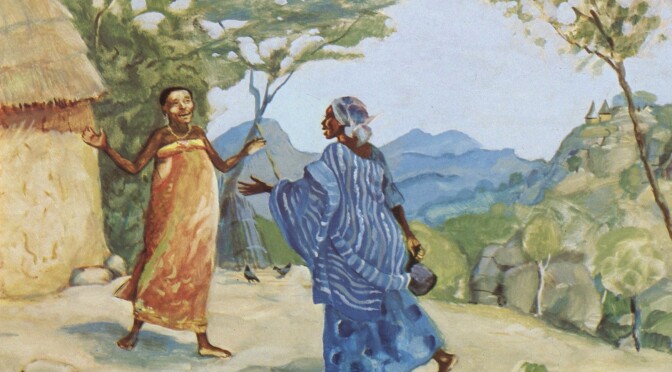 Luke 1:39-56 In those days Mary set out and went with haste to a Judean town in the hill country, 40where she entered the house of Zechariah and greeted Elizabeth. 41When Elizabeth heard Mary’s greeting, the child leaped in her womb. And Elizabeth was filled with the Holy Spirit 42and exclaimed with a loud cry, “Blessed are you among women, and blessed is the fruit of your womb. 43And why has this happened to me, that the mother of my Lord comes to me? 44For as soon as I heard the sound of your greeting, the child in my womb leaped for joy. 45And blessed is she who believed that there would be a fulfillment of what was spoken to her by the Lord.”
46And Mary said,
“My soul magnifies the Lord,
47and my spirit rejoices in God my Savior,
48for he has looked with favor on the lowliness of his servant.
Surely, from now on all generations will call me blessed;
49for the Mighty One has done great things for me,
and holy is his name.
50His mercy is for those who fear him
from generation to generation.
51He has shown strength with his arm;
he has scattered the proud in the thoughts of their hearts.
52He has brought down the powerful from their thrones,
and lifted up the lowly;
53he has filled the hungry with good things,
and sent the rich away empty.
54He has helped his servant Israel,
in remembrance of his mercy,
55according to the promise he made to our ancestors,
to Abraham and to his descendants forever.”
56And Mary remained with her about three months and then returned to her home.

What IS it about Mary? As Jesus’ mother, and a key figure during Advent and Christmas every year, most of us have some opinion about her. She is divinized by some and romanticized by others. She is prayed to, sung to, questioned, underestimated, elevated, and celebrated.  We know nothing about her before her visit from the angel Gabriel. There are no character references or list of qualities that support her being chosen as Jesus’ mother. We simply get the announcement of being chosen, of Mary’s consent to God’s will, and then her dash to the hill country to stay with her cousin Elizabeth for three months.

Mary is newly pregnant. Elizabeth is six months along. Mary is pregnant too soon – not yet married. Elizabeth is pregnant too late – no longer young and had no other children.[1] What a pair they made in the first century when women’s sexuality was closely guarded and honor-bound. Both of their pregnancies were taboo, disrupting social norms with pregnancies that bore shame and humiliation. Earlier in the story we are told that Elizabeth remained in seclusion for five months after she conceived.[2] It was in the sixth month that the angel Gabriel announced God’s plans to Mary. Mary knew the lowliness she sang about in verse 48 because her consent to God’s will, to bear a holy child, shamed her honor and risked her life.

Mary and Elizabeth show us what courage looks like in the face of shame. It looks like connecting with someone else who knows a similar shame and humiliation. Hanging out with them. Belonging with them. Mary and Elizabeth show us what the church is. Not what it should be. What it IS. Yesterday our family attended the funeral of one of our longtime family friends. His name is Paul. His son gave one of the eulogies and talked about Paul’s ability to love unconditionally and how that was connected to his faith. It wasn’t that Paul was okay with whatever. It’s that he knew that people, including his children, were more valuable and vastly more important than whatever they had done. Facing the consequences for whatever happens, forgiving where forgiveness is needed, and staying connected through it all are the main things because people are the main thing. Mary and Elizabeth give us a first century example of what this looks like. Our friend Paul gave us a 21st century example of what this looks like. There are other examples too.

In the last few weeks, a number of people have talked with me about their worship experiences.  A couple of folks feel certain that communion has been key for them in overcoming deeply personal challenges. Others have mentioned that worship connects with their grief in ways that defy easy explanations. I’m sure that each of us would express our worship experiences quite differently – from the mundane to the mysterious and everything in between. The impression made by the Bible story and by people’s worship stories is one belonging. No matter how imperfect each of us are or how imperfect our life situations may be, we have a place to belong because we first belong to God and, because of God’s promises, we belong to each other. In belonging we are comforted in our humiliations but we also find courage for whatever comes next.

Courage in belonging is one of Mary’s gifts to us through the example of her and Elizabeth, and through the example of being called by God without character references. Our Welcome Connection ministry here at church focuses on belonging. The ministry team started meeting a few months before Covid was even a thing. Naming the group became of part of figuring out what we were up to. I’ve learned over time to step back and watch as group names form from the group members themselves. Ta-da! Welcome Connection evolved out of those conversations – the name of the ministry also named part of our goal. Welcome Connection reaches out and invites folks to belong as well as welcome and connect folks with each other. Because it’s one thing to worship together and it’s another to be church with each other.

When Welcome Connection regrouped a few months ago and started meeting again, the first priority was reaching out to congregation members and re-connecting with them. Phone calls were made to let people know we were back in person for worship. Deepening our sense of belonging after being disconnected was a top priority. After all, reaching out and inviting goes better if there are connecting points in place. Welcome Connection’s urgency also grows from the awareness that 53 new continuing visitors in 31 households have begun worshipping more recently.[3] Some of you who are continuing visitors started worshipping via livestream and now are in person. Others of you found worship in person with the awareness of hoping for a place and people of connection, faith, and meaning. Whatever the reason, Welcome Connection’s ministry is finding ways to help folks connect with each other.

Obviously, everyone can’t know everyone in a congregation like ours. But there are ways to belong to groups and ministries that help us get to know each other and have a place to belong. Some ways of belonging are established, like Sunday lunches after 10:30 worship, and other ways are just beginning like Men’s Bible Study which is starting because someone suggested the idea and there’s a willing leader for it. Thanks Erin and Brian! Everyone’s creative ideas and experiments are invited by the Welcome Connection ministry. Feel free to brainstorm with each other and bring ideas to the team along with who can lead it. In a disconnected world, Elizabeth and Mary’s example of belonging is one worth pondering for our congregation.

Additionally, there’s a special name for Mary that comes from the Greek Orthodox Church – Theotokos (Θεοτόκος).  Theotokos means God-bearer. Mary became a God-bearer when she consented to God’s plan for her to conceive a child and name him Jesus. When Mary calls herself “his servant” in verse 46, she echoes verse 38 when she called herself “a servant of the Lord” in her consent. Missing in the English is the closer translation from the Greek for δούλη[doule] which means slave to the full expression, “slave of the Lord.” “Slave of the Lord” aligns with the Jewish use of the honorary title “slave of God” used to describe Moses, Joshua, Abraham, David, Isaac, the prophets, Jacob, and one woman – Hannah.[4]

Mary singing about lowliness describes her humiliation, while in the same breath singing about being a “slave of God” places her within a long line of ancestors who were called by God. She is simultaneously elevated by her connection with the ancestors, even as she’s humiliated by her God-bearing body outside of the accepted social norms. Quite differently, but along similar lines, we become God-bearers when we are baptized in the name of the Father, and of the Son, and of the Holy Spirit – bearing God’s love into the world through labors of love for our neighbors. As God-bearers, we are given opportunities to consent to God’s will, to gain courage from belonging to each other, and to take risks that may humiliate us on behalf of each other and our neighbors.

In the Hymn of the Day after the sermon, we’ll sing the Magnificat, Mary’s song of justice and deliverance in verses 46 to 55 from the Luke reading today. Singing the Magnificat gives us time to think about how we bear God to each other and to the wider world. Would you use words like Mary’s? Or would you use other words to describe what bearing God’s will into the world would look like for you? Regardless, you ARE God-bearers. Blessed are YOU among people as you’re blessed by the power of the Holy Spirit for your own sake and the sake of the world. Amen.

[3] Discover Augustana classes are scheduled on Sundays January 9, 16, 23, and 30 between worship services for folks who would like to learn more about Augustana or are thinking about becoming members.