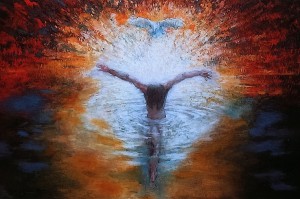 Genesis 1:1-5  In the beginning when God created the heavens and the earth, 2 the earth was a formless void and darkness covered the face of the deep, while a wind from God swept over the face of the waters.
3 Then God said, “Let there be light”; and there was light. 4 And God saw that the light was good; and God separated the light from the darkness. 5 God called the light Day, and the darkness he called Night. And there was evening and there was morning, the first day.

Mark 1:4-11  John the baptizer appeared in the wilderness, proclaiming a baptism of repentance for the forgiveness of sins. 5 And people from the whole Judean countryside and all the people of Jerusalem were going out to him, and were baptized by him in the river Jordan, confessing their sins. 6 Now John was clothed with camel’s hair, with a leather belt around his waist, and he ate locusts and wild honey. 7 He proclaimed, “The one who is more powerful than I is coming after me; I am not worthy to stoop down and untie the thong of his sandals. 8 I have baptized you with water; but he will baptize you with the Holy Spirit.”
9 In those days Jesus came from Nazareth of Galilee and was baptized by John in the Jordan. 10 And just as he was coming up out of the water, he saw the heavens torn apart and the Spirit descending like a dove on him. 11 And a voice came from heaven, “You are my Son, the Beloved; with you I am well pleased.”

There are wild, unimaginable things happening in this Genesis creation story.  Formlessness and void of the earth.  Imagine that for a moment – formless…void…utter darkness.  Nothing to distinguish one part from another.  Nothing through which to capture any imagining of its future.  A wind in the form of breath, as the Spirit of God blows over the mystery and threat of the deep.  Sound in seismic proportions.  No quiet or tame God picking up a bit of clay and pottering away.  From our human-sized perspective, this is massive.  This is earth and heavens – loud, windy and wild.  This story doesn’t allow us to cozy up into a calm, domesticated God.   This is the sheer power of God beyond our imagining, beyond our understanding.

The God of creation is not to be tamed.  And yet, for many of us, our first inclination is to tone God down.  As if we can make God easier on the heart and mind if we craft just the right language about God.  Or at the very least we can distract ourselves from the problem of the power of God if we spend our time arguing about the accuracy of the story.

Several years ago, when my daughter Taryn was in preschool, I had only been back in church as an adult for a few years.  Taryn’s preschool was attached to our church and some of the school’s parents seemed to know that I was involved in the church too.  It was common to have conversations with other parents during the dropping off and picking up times.  One day after dropping Taryn off, I was sneaking a peek into the classroom to watch her.  One of the dads hung back too.  A few minutes went by and he sidled over to chat.  He confirmed that I went to the church and then, without any preamble or build-up, he asked, “If God is all about love then why do some people say they fear God?”  I fumbled and stumbled around the idea of God’s power for a minute or two but clearly was not passing muster on any kind of answer that settled this man’s mind.  And there’s the problem, right there, when it comes to God’s awesome, creating power, there is nothing that settles our mind.  No matter how many days or millennia you think it took, the creative force of it is mind-blowing – and it blows our soft and squishy imaginings right out the window with it.

Here’s the thing.  When we’re tempted to talk about God as exclusively merciful and loving and forgiving, we forget the fearsome breath of God that moves over a formless, dark void; the Spirit of God that moves over what Jurgen Moltmann calls “creation-in-the-beginning.”[1]  When we soften or negate the power of God in any way, we don’t have to ask the question, “What would happen if God does this again?”

So let’s hang onto the fearsome power of God and ask that question.  “What would happen if God uses that kind of power again?” Oh…wait…God does do it again.  Anyone hear that part of the baptism of Jesus where the heavens are torn open?  The Spirit of God that moves over formless, dark voids, is the same Spirit who tears apart the heavens and descends, untamable, into the wild, over a river, onto a person, and names him “Beloved.”[2]  This baptism of Jesus is a revelation of the redemption to come and the unmitigated power infusing that redemption.

Moltmann talks about the “creation-in-the-beginning” being in continuity with the redemption of all things.  In the whole Bible, “the words used for the divine act of creating are also used for God’s liberating and redeeming acts (e.g. Isaiah 43:19); redemption is the final new creation of all things…”[3]

Into these voids comes the Spirit of God.  The same Spirit of God who breathes light into the darkness.[4]  Light into the darkness, now think about that one.  God spoke these words, “Let there be light” as God’s breath rushed over the mystery and threat of the deep.   What does creation of light sound like?  Is there a crack of thunder as light creates heat?  Is there a deep and resounding vibration that would quake us to the core and make us aware of every cell in our bodies?  What does even a single blaze of light through unfathomable darkness look like as it bounds through creation with power strong enough to sustain life through all the mornings and evenings of the millennia?

We know a lot about light, or at least the scientists do, but did you know that we still don’t know what it is?  Einstein spent a lot of his time researching the interplay between light and time, challenged the orthodoxy of the previous 100 years of physics and won a Nobel Prize.[5] Einstein did all this and yet we still really don’t know what it is.  We mimic it but we cannot create it. [6]  Light is more than a convenient nuance in our days.  Light is sustaining, life giving energy.  It shows us how limited we are as creatures that we still don’t understand it.