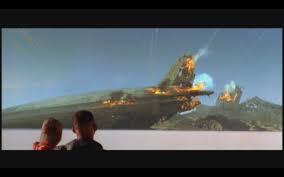 Then the Pharisees went and plotted to entrap him in what he said. 16 So they sent their disciples to him, along with the Herodians, saying, “Teacher, we know that you are sincere, and teach the way of God in accordance with truth, and show deference to no one; for you do not regard people with partiality. 17 Tell us, then, what you think. Is it lawful to pay taxes to the emperor, or not?” 18 But Jesus, aware of their malice, said, “Why are you putting me to the test, you hypocrites? 19 Show me the coin used for the tax.” And they brought him a denarius. 20 Then he said to them, “Whose head is this, and whose title?” 21 They answered, “The emperor’s.” Then he said to them, “Give therefore to the emperor the things that are the emperor’s, and to God the things that are God’s.” 22 When they heard this, they were amazed; and they left him and went away.

Nothing draws people together like a common enemy.  Some of my go-to movies are a prime example.  Independence Day is one of them – a film in which a really creepy, roach-like alien species drops in to annihilate the world.  They hope to chew up the planet’s resources, spit it out when they’re done, and move on to the next planet a few galaxies over.  But those nasty aliens didn’t count on Captain Steve Miller – plucky marine pilot, or David Levinson – brilliant computer systems analyst.  Even more, those aliens didn’t count on all the sworn enemies of the world uniting to work together to get rid them.  Once the aliens’ ships ignite, explode, and fall to the earth, the movie-goer shares in the vicarious thrill of victory – treated to scene-after-scene of people from all kinds of countries jumping up and down in shared celebration.

Similarly, but with fewer special effects, the Pharisees and the Herodians unite against the common enemy they find in Jesus.[1]  The Pharisees have had it with Rome and the tax that is at punishing levels.  The Herodians are Roman loyalists who support the tax and are snooping around for evidence of treason against the state so they can report it back to Rome.  Together the Pharisees and Herodians have concocted the perfect trap.  If Jesus speaks positively about the tax, he’s doomed; if Jesus speaks out against the tax, he’s doomed.[2]  We can almost hear the political attack ad, complete with the music of doom and the woman’s voice-over that sounds like the same person from ad to ad:

Jesus goes on to evade the trap and flip it back on the ones who laid it.   The Pharisees and the Herodians were quite smart about at least one thing.  The money conversation can easily be used a trap.  A trap that many of us get caught in whether it’s about taxes or spending or giving or receiving or something else about money entirely.

In the Metro East Pastors’ Text Study this week we talked about Jesus, Pharisees, and Herodians, and the trap.  Many of us hear Jesus’ stories about money.  We hear directions to sell everything then give it all to the poor, invest wisely, do not hoard money.  We hear these stories and feel trapped by these stories along with Pharisees and Herodians.  Hearing the stories invokes feelings of panic, disconnect, moral superiority, or utter inadequacy.   We find ourselves thinking we should be saving more and investing more and giving more. Looking closely at these stories of Jesus, one of the discoveries is that we are not so much trapped by them as we are named in them.

Whether shame or superiority is the driving force behind finding a common enemy, we need the reminder of the gospel.  Last week’s sermon reminded us that Jesus, thrown onto a cross in a place of shame, frees us from shame.  Frees us from shame that immobilizes us.   Frees us into the gospel that enlivens us.  For some of us, this freedom means taking a money class here on Monday nights to study and talk frankly with each other about faith, life, and money.   For others of us, this freedom means confessing a secret pile of debt to a partner and getting some help to figure that out.  For others of us, this freedom means that the word “money” takes its place alongside other things we publicly talk about and act on.  As a people called the church, this means we also talk about giving money and act on it.

For some of us in the church, giving money is practical.  Money is part of the cost of doing ministry within the congregation of Augustana.  These costs can be broken down into money given to charitable organizations, international ministry efforts, youth ministry, music ministry, building maintenance, ministry staff salaries, to name but a few.  These are ALL good things!  Some people are faithful givers as a practicality; meaning that they are connected with the Augustana congregation and so they estimate their giving for the year and give consistently.

For others of us in the church, giving money is theological.  Some say with the Psalmist that, “The earth is the Lord’s and all that is in it, the world, and those who live it…”[3]  If this is so, then money also belongs to God first before it belongs to any of us.  So then giving money becomes an act of praise and gratitude.

And still for others of in the church, giving money is relational.  People before us gave money as keepers of the faith, as stewards of God’s mysteries.  Therefore, some give money now as stewards of the faith so that the faith is available to future generations as it is to us right now.

None of these reasons to give money are mutually exclusive, nor is this an inclusive list for the all the reasons people give money to their congregation.  The point is that the Gospel promise holds even in our conversations about money.  The “law” convicts us in all kinds of ways including the ways we use money.  At the same time the gospel frees us – frees us to consider our underlying assumptions about money, giving, church, charity, stewardship, faith, all of it, as the gospel also frees us to give.  Thanks be to God.