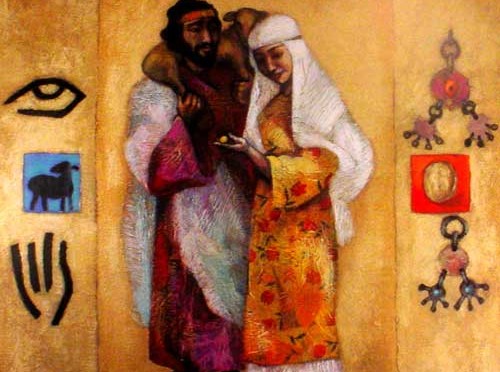 Luke 15:1-10  Now all the tax collectors and sinners were coming near to listen to him. 2 And the Pharisees and the scribes were grumbling and saying, “This fellow welcomes sinners and eats with them.” 3 So he told them this parable: 4 “Which one of you, having a hundred sheep and losing one of them, does not leave the ninety-nine in the wilderness and go after the one that is lost until he finds it? 5 When he has found it, he lays it on his shoulders and rejoices. 6 And when he comes home, he calls together his friends and neighbors, saying to them, “Rejoice with me, for I have found my sheep that was lost.’ 7 Just so, I tell you, there will be more joy in heaven over one sinner who repents than over ninety-nine righteous persons who need no repentance. 8 “Or what woman having ten silver coins, if she loses one of them, does not light a lamp, sweep the house, and search carefully until she finds it? 9 When she has found it, she calls together her friends and neighbors, saying, “Rejoice with me, for I have found the coin that I had lost.’ 10 Just so, I tell you, there is joy in the presence of the angels of God over one sinner who repents.”

1 Timothy 1:12-17 I am grateful to Christ Jesus our Lord, who has strengthened me, because he judged me faithful and appointed me to his service, 13 even though I was formerly a blasphemer, a persecutor, and a man of violence. But I received mercy because I had acted ignorantly in unbelief, 14 and the grace of our Lord overflowed for me with the faith and love that are in Christ Jesus. 15 The saying is sure and worthy of full acceptance, that Christ Jesus came into the world to save sinners—of whom I am the foremost. 16 But for that very reason I received mercy, so that in me, as the foremost, Jesus Christ might display the utmost patience, making me an example to those who would come to believe in him for eternal life. 17 To the King of the ages, immortal, invisible, the only God, be honor and glory forever and ever. Amen.

My son made me a bracelet.  The class assignment had to be an original design and solder two kinds of metal together.  He chose copper and silver, balanced symmetry and asymmetry in the design, soldered and sanded the metals, and presented me with the finished product.  The bracelet had a toggle clasp to hold it on my wrist.  A toggle clasp is cool looking, but it can slip loose if you jostle it just so.  On my way home from Costco one day, hands in that 9-and-3 on the steering wheel, I realized it was no longer on my wrist.  Almost home, I ran my groceries inside and headed back to Costco where I retraced my path.  Didn’t find it.  Went to customer service and, lo and behold, someone had found it and turned it in.  I could NOT believe it!  Happy-happy-joy-joy!  A small thing but a whole lotta love embedded in it. Search. Found. Joy.  (And, yes, toggle clasp out, new clasp in.)

Joy is one of the highlights in the gospel reading today.  The shepherd rejoices over the lost sheep (v6).  The woman who finds her lost coin, a day’s wage gone missing, rejoices with her friends (v9).  And we haven’t even gotten to the story of the Prodigal Son that comes in the next verses and completes the trifecta of lost and found things in the next few verses.[1]  Take a peek at Luke 15 in the pew Bible in front of you.  Note how chapter 15 ramps up the lost stories each time.  There is so much joy that it can’t help but be shared. The shepherd who finds his sheep “calls together his friends and neighbors” inviting them to rejoice with him.  The woman who finds her coin “calls together her friends and neighbors” inviting them to rejoice with her.  The father runs wildly to his returning son, kisses him, kills the fatted calf, and celebrates with a dance party.

Friends, neighbors, and households are not the only ones partying in these parables.  Jesus adds that there is joy in the presence of the angels of God over one sinner who repents.  We heard a bit about the joy of the angels in our Confession and Forgiveness at the beginning of worship today.  We heard that “For the sake of Jesus Christ ☩ your sins are forgiven” and then were invited to “rejoice with the angels at this good news.” Now THAT is a cool image – angels celebrating on our behalf. It’s counter-cultural to jump into anything with a confession of wrongdoing on our lips.  So much so that some people ask why we have a part of our worship that makes us sound so bad.  I argue that we start with the truth and the truth is that we can be as dumb as that sheep, as slippery as that coin, and as disobedient as that son. We’re sinners and we know it.  Sin is deeper than the hurtful things we do to others and ourselves. Sin is the breach, the distance, that is between us and God. Sin has us thinking we can save ourselves by finding ourselves.

Along the line of finding ourselves, a tourist group in Iceland lost track of a fellow traveler at a volcanic landmark.  A search was organized once the woman was verified missing.  50 members of the tour group joined the search while the Icelandic coast guard scrambled a helicopter.  They searched well into the night until one woman in the search and rescue group realized that everyone was searching for her and told the local police who called off the search.  It was about 3 o’clock in the morning.  The problem occurred when she had broken off from the group earlier in the day to change her clothes.  Her description was generic enough that she didn’t recognize herself in it.  The news headline was spot on:  “Missing Woman ‘Finds Herself’ After an Intense Search.” [2]  It’s a perfect headline for our topic at hand, really.

The language of “finding ourselves” is an old one.  We thrive on thinking things through to the essence of self.  Tony Hoagland’s poem, “Among the Intellectuals,” gets at this tendency to think things down to the last thought.  He describes being “thought-provoking, as if thought were an animal” to be poked with a stick.  After illustrating his own experience of intellectual posturing, he writes:

Inevitably, you find out you are lost, really lost;
blind, really blind;
stupid, really stupid;
dry, really dry;
hungry, really hungry;
and you go on from there.[3]

The poet’s words strike a chord in the current culture of snark posing as savvy and irony masquerading as intelligence.  The dizzying intellectual acrobatics leave in their wake a longing for earnest joy and hoping for a moment of the absurd and even ridiculous.  Sublime is good but sometimes silly is what’s needed.  And that’s what we get in Jesus’ parables.  Jesus asks, “Which of you, having a hundred sheep and losing one of them, does not leave the ninety-nine in the wilderness and go after the one that is lost until he finds it?”  You know what the answer is to that ridiculous question?  No shepherd would do that.  It’s absurd to even consider leaving your livelihood of 99 sheep in the wilderness to hunt down a single lost sheep.  Then Jesus asks, “…what woman having ten sliver coins, if she loses one of them, does not light a lamp, sweep the house, and search carefully until she finds it?”  The answer?  No woman would spend more money on lamp oil worth more than the coin she is looking for.  It’s ridiculous even to consider being that wasteful.

Jesus’ parables don’t leave the lost to find themselves.  Lost things simply don’t have that kind of capacity.  The seeking begins with God – from the cosmic to the particular in the person of Jesus; from Creator to creation to creature; from God to us.  God is not irresistible.  Many of us wander off, slip away, or run from God.  Our self-centeredness knows no bounds.  But God relentlessly pursues us through Jesus’ ministry, death, and resurrection.  And God’s joy is exuberant when reconciliation happens between us and God.  Joy is part of God’s character and the angels rejoice in kind.

Finding the lost, no matter the cost, makes the angels jump for joy with the one who searches and finds.  One wonders if the search and the celebration cost more than the lost objects were worth.[4]  In that regard, the opening line of the gospel reading is even more compelling.  “Now all the tax collectors and sinners were coming near to listen to [Jesus].”  Not just some. All. Not only the tax collectors. Also, the sinners. It’s an absurd excess of people.  I’m sure the grumbling religious elite WERE perturbed by the party crashers. But imagine what the sinners and tax collectors felt by being included around Jesus’ table. Just for a moment, imagine their joy. If imagining the joy of the sinners a stretch, take a look at Paul writing to Timothy in our second reading today.  Here he confesses to perpetrating violence. Elsewhere, we are told he was killing Jesus followers.  Then he had a come to Jesus moment.[5]  He had his own story of being lost and found, his own story of joy.  I’ve heard some of your stories including your joy.  There’s nothing like those moments of being found.

Rarely is being found a once and done experience.  Oh sure, our baptisms happen once.  But the experience of being in a push me/pull you with God happens over a lifetime. Often the stories defy being put into words that make sense to other people although I’d argue we should keep trying to find those words.  Often our own stories parallel elements of Jesus’ parables either by being dumb as a sheep, slippery as a coin, or disobedient as a son. Sometimes, our stories include all three.  Our joy at being found is a drop in the bucket of the joy of God who searches for us, risking God’s whole self in the search.  We are never beyond God’s relentless grace.