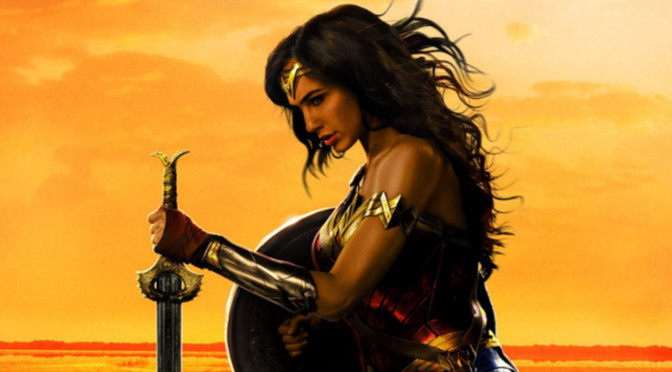 John 3:14-21 And just as Moses lifted up the serpent in the wilderness, so must the Son of Man be lifted up, 15 that whoever believes in him may have eternal life. 16 “For God so loved the world that he gave his only Son, so that everyone who believes in him may not perish but may have eternal life. 17 “Indeed, God did not send the Son into the world to condemn the world, but in order that the world might be saved through him. 18 Those who believe in him are not condemned; but those who do not believe are condemned already, because they have not believed in the name of the only Son of God. 19 And this is the judgment, that the light has come into the world, and people loved darkness rather than light because their deeds were evil. 20 For all who do evil hate the light and do not come to the light, so that their deeds may not be exposed. 21 But those who do what is true come to the light, so that it may be clearly seen that their deeds have been done in God.”

Wonder Woman hit movie theaters last spring and tallied box office returns of $103 million for opening weekend and over $800 million in worldwide box office sales.[1] Black Panther opened in mid-February to the tune of $202 million and is currently well over $900 million in worldwide ticket sales.[2] It’s still in theaters so, who knows, a billion dollars is possible. Those are record breaking numbers. People not only enjoy the quality movie making, they also care deeply about these films – their characters and stories. I’m fascinated by how deeply people care. Every so often, I day dream about the doctoral program at DU called Theology, Philosophy, and Cultural Theory.[3] Programs like this excavate the layers of experience and thought behind cultural phenomena. For now, there are experts in their fields who propose their own theories. TV critic Eric Deggans thinks that, “Superheroes answer this desire that a lot of us have to have somebody cut through all the nonsense in life, use extraordinary powers to bring justice to a situation, and I think that’s the appeal of these movies and these T.V. shows; To find somebody who can just sort of cut through all the nonsense and deliver justice very directly.”[4]

It’s not a stretch that we would want God to work in the ways of the superhero, too. Especially in the Gospel of John in which Jesus performs miracles and seems to have superman-like resolve from his baptism all the way through his death on the cross. While I do not think this means what we often think it means, there is something both super-human and all too human going on here. The human part is that we are prone to condemnation. We like to judge other people as if we could do better in the same set of circumstances.[5]  And we tend to pull God into our court to support our verdict. Along this line, I hung out with the first communion students and their parents on Wednesday evening. Their first communion book, written by Daniel Erlander, tells stories about the crabby people who were very, very crabby about Jesus.[6] They didn’t like the way he healed. They didn’t like the way he fed. They didn’t like the way he forgave.

They didn’t like that he ate with the wrong people. You get the idea. We worked through the first few pages of the book, regaled by stories about Jesus while the crabby people in the stories plotted to kill him. The crabby people were meting out their own kind of justice with a plan to hang Jesus on a cross. Class ended with this thought. I told the kids that there may be crabby people who pop up in our lives to ask us the question, “Do you know what God’s going to do to you?!” Then I told them how to answer it by saying, “Yes, God’s going to love me.”  We know this because all the way to the cross there was not one finger lifted by God against the very people who were part of the execution.

The love of God is part of these verses today as the world God so loves. It’s a reference from John 3:16 which begins, “For God so loved the world…”  John 3:16 is well known to us – on signs at football games and quite possibly anywhere else you could imagine, the signs read either just chapter and verse or sometimes the sign-artist will write the whole thing. “For God so loved the world that he gave his only Son, so that everyone who believes in him may not perish but may have eternal life.” I always hope that the next verse, John 3:17, will make it onto the sign too.

Listen to beginning os John 3:17 again, “”Indeed, God did not send the Son into the world to condemn the world…” The Son in these Bible verses is Jesus. In God’s mysterious way, those of us who confess a faith of Jesus, also say that Jesus is God and God is Jesus. The Gospel of John begins with this claim. “In the beginning was the Word, and the Word was with God, and the Word was God…what came into being was life and the life was the light of all the people…the light shines in the darkness and the darkness did not overcome it…and the Word became flesh and lived among us.”[7] The Gospel of John confesses Jesus’ divinity.

Jesus came not to condemn – came NOT to be the movie superhero doling out retributive justice. Yet that is the justice often claimed out of these verses. It’s the kind of justice we crave from our superheroes because it cuts through the nonsense and appeals to a sense of fairness that is satisfying. Satisfying, that is, when it’s someone else getting cut down. A little less satisfying when we’re the ones under judgment. But, our satisfaction is amplified when our connections with each other are made around a common enemy. Kind of like those crabby people in the first communion book who are united against their common enemy of Jesus. Why doesn’t Jesus come out swinging and deliver the final one-two punch? Jesus, while occasionally sarcastic and biting, is no anti-hero. He isn’t skulking around, isolated and cynical. He is walking around as the light. Shining light on the human condition by telling the truth about the deeds we do in the darkness and light that exist in the world.

Here’s the truth of it. We take turns in the darkness and light – by choice and by circumstance. Part of God loving the world is shining light on the truth of what we do. This isn’t necessarily joyful or easy. But shining the light on our rush to judgment without all the data, our call for retributive justice without compassion, or our determination to energize around a common enemy is exactly what’s needed. Shining a light on all of our attempts to end up at the top of the heap while condemning others around us.

In the Gospel reading we are told that, “The light has come into the world.” The very first verses of the Gospel of John tells us Jesus is “the light of all people.”[8]  During communion we hear the words of Jesus spoken over the wine:

Again, after supper, he took the cup, gave thanks, and gave it for ALL to drink saying: This cup is the new covenant in my blood, shed for you and for ALL people for the forgiveness of sin. Do this for the remembrance of me.[9]

During the invitation to communion, we often say that if you are here you are welcome to Holy Communion. It is Christ’s table for all because Jesus is the light come into the world, the light of all people. Such is the welcome and grace of our Lord Jesus Christ. Neither superhero, nor anti-hero, Jesus is simply given to us by grace, for God so loves the world and continues to draw us into the light of Christ by this good news.

[6] Daniel Erlander. A Place for You: My Holy Communion Book. 1999. http://danielerlander.com/apfy.html