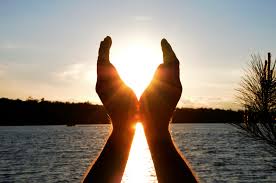 John 6:1-21  After this Jesus went to the other side of the Sea of Galilee, also called the Sea of Tiberias. 2 A large crowd kept following him, because they saw the signs that he was doing for the sick. 3 Jesus went up the mountain and sat down there with his disciples. 4 Now the Passover, the festival of the Jews, was near. 5 When he looked up and saw a large crowd coming toward him, Jesus said to Philip, “Where are we to buy bread for these people to eat?” 6 He said this to test him, for he himself knew what he was going to do. 7 Philip answered him, “Six months’ wages would not buy enough bread for each of them to get a little.” 8 One of his disciples, Andrew, Simon Peter’s brother, said to him, 9 “There is a boy here who has five barley loaves and two fish. But what are they among so many people?” 10 Jesus said, “Make the people sit down.” Now there was a great deal of grass in the place; so they sat down, about five thousand in all. 11 Then Jesus took the loaves, and when he had given thanks, he distributed them to those who were seated; so also the fish, as much as they wanted. 12 When they were satisfied, he told his disciples, “Gather up the fragments left over, so that nothing may be lost.” 13 So they gathered them up, and from the fragments of the five barley loaves, left by those who had eaten, they filled twelve baskets. 14 When the people saw the sign that he had done, they began to say, “This is indeed the prophet who is to come into the world.” 15 When Jesus realized that they were about to come and take him by force to make him king, he withdrew again to the mountain by himself.

The Bible story today could be an early edition of “Where’s Waldo?” with Jesus as the hidden one.  We pick up the story after a healing.  Jesus is trying to stay one step ahead of the crowds.  They saw him heal.  They heard him teach.  He has drawn a following.  He leads quite a chase.  Perhaps not high speed, but a chase nonetheless.  He even goes so far as to head to the other side of the sea of Tiberius and climb a mountain.  No rest for the weary, though.  When he looks up, there’s the crowd.  The trek through the wilderness does not shake them.  The people simply keep following him.

As Jesus sits down, he looks up.  He sees the crowd.  I wonder what he sees when he looks at them.  They’ve been chasing him for a while at this point.  Do they look confused?  Jesus is a healer and yet so hard to pin down.  Do they look tired?  Jesus led quite a chase.  Have some in the crowd started to wonder why Jesus just can’t stay put?  He asks for the crowd to sit down.  There is a “great deal of grass in the place; so they sat down.”  Enough room for everyone to rest.

At the very least, the crowd must look hungry. Jesus talks to the disciples about feeding the crowd and the disciples’ confusion is understandable.  Where are they going to get the food to feed all of these people?

Andrew found a boy who has some loaves of bread and some fish but it’s not near enough.  Jesus “took the loaves, and when he had given thanks, he distributed them to those who were seated; so also the fish, as much as they wanted.”

Andrew says, “There is a boy here…”  It starts with this one boy.  The disciples become part of the distribution. Jesus handles the feeding of the crowd.  A tired, hungry, and confused crowd.

Andrew’s comment, however, makes the boy and what he offers, quite immediate.  He says, “There is a boy here…”

A few decades ago, there was a growing urge within Augustana to begin educating children during the week.  A few Augustana people started thinking about how the congregation could begin and sustain an early learning center for the community.  Like Andrew’s observation about the boy, people at Augustana were saying, “There are children here, in the community…”  Here we are today, several decades later after those initial ideas.  Like the boy’s gift of the loaves and fishes, the Augustana Early Learning Center children have grown in number over the years.  This is one of the ways ministry works and is good reason to celebrate.

The theme of the day is celebrating Augustana Early Learning Center as a mutual ministry of the congregation.  We celebrate its conception, high quality learning, and accessibility to the community including affordable tuition and scholarships.  Additionally, we celebrate all that the Early Learning Center gives back to the congregation on a daily basis.  These children bring energy and a fresh way of seeing the world.  The staff along with director Chris Baroody give of their considerable years of skill and consistently highlight who the children are today.  The Early Learning Center is also a strong community presence and impacts daily life for so many children and families.  This is a lot of mutual ministry that is like the exponential effect of loaves and fishes.

The immediacy of who children are right now is evident across the whole of Augustana.  On any given Sunday, there are children on the steps of the sanctuary or chiming in during worship in the chapel.  There are children in Sunday School, and in choirs.  Children this month are collecting canned Chili for Metro Caring.  In the last few months they have put together personal care kits for refugees and portioned out beans and rice for Metro Caring’s grocery store.  Children actively shape the ministry of the congregation now, today.

In the midst of tension and heartache unfolding in Paris, and already too well known in Syria and Beirut, it is especially important that we take a moment to see the places of light.  And there is a lot of light in the children’s ministries.  Martin Luther King Jr. said, “Darkness cannot drive out darkness; only light can do that. Hate cannot drive out hate; only love can do that.[1]

Often, like today for Alice, there is a baptism – a life changing encounter with water and the Holy Spirit.  A baptism into the death and life of Jesus.

In baptism, we are received in our powerlessness.  This is true whether we are a child or an adult.  If you read to the end of the Bible Story today, the crowds around Jesus want to make him king.  He left them before they could accomplish their goal.  In his absence, he said, “No.”   He said no to their ambitions and delusions of control.[2]   It’s easy to relate to the desires of the crowd around Jesus who want to make him king.  As video, photos, and information continue to come out of Paris, there is quite a crowd of people all around the world whose confusion is loaded with shock and grief.  In the moment of shock and grief, God is present by way of the cross.  For where else would God be but with those who are hurting and confused in their despair.  Conversely, there are a lot of people thinking about how to use power in response to the murders.

In the meantime, here…today, we are received in the waters of baptism and at the table of communion in our powerlessness, so much beyond our control.  The good news of Jesus is that the self-sacrificing love of God is given to us freely.  God’s love comes to us.  We don’t attain it or acquire it under our own steam.   There is nothing we do or leave undone that makes God love us any more or any less.   This is the gospel, the good news.

This is the gospel lived out in the ministries that assure children that they are loved and accepted for who they are today.  There is nothing they can do that makes God love them more or any less.  And this is the gospel promise for you.  There is nothing you can do that makes God love you any more or any less.