John 1:43-51 “Can Anything Good Come Out of Lutheran Church of the Master?” 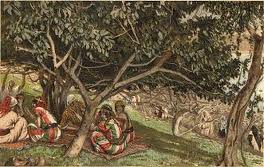 John 1:43-51 – The next day Jesus decided to go to Galilee. He found Philip and said to him, “Follow me.” 44 Now Philip was from Bethsaida, the city of Andrew and Peter. 45 Philip found Nathanael and said to him, “We have found him about whom Moses in the law and also the prophets wrote, Jesus son of Joseph from Nazareth.” 46 Nathanael said to him, “Can anything good come out of Nazareth?” Philip said to him, “Come and see.” 47 When Jesus saw Nathanael coming toward him, he said of him, “Here is truly an Israelite in whom there is no deceit!” 48 Nathanael asked him, “Where did you get to know me?” Jesus answered, “I saw you under the fig tree before Philip called you.” 49 Nathanael replied, “Rabbi, you are the Son of God! You are the King of Israel!” 50 Jesus answered, “Do you believe because I told you that I saw you under the fig tree? You will see greater things than these.” 51 And he said to him, “Very truly, I tell you, you will see heaven opened and the angels of God ascending and descending upon the Son of Man.”

From time-to-time I go through the ritual of giving up coffee for awhile.  Maybe just to see if I can.  Maybe because I like it with fake sugar and half-and-half, neither of which are all that good for me.  Maybe it’s so I can live piously alongside those green tea zealots.  Or maybe a little of all of that and more.  Regardless, I’m in tea mode.  This means that I get to read poetry on the sides of my boxes of tea and receive wise counsel from the little tags that hang from the tea bag’s string.  About a week ago there was one such tea bag tag that hung in my mind for awhile.  This particular tea bag tag spoke a 19th century Chinese proverb also credited to Maya Angelou.

And “What,” I hear you thinking, “does this tea-frothed bit of pop philosophy have to do with Philip, Nathaniel and Jesus?”  Fabulous question!  Let’s recap…

Jesus finds Philip – note that please – Jesus finds Philip.  Philip then finds Nathaniel and makes a big speech about finding Jesus.  Who found whom here?  And then, after Philip says he found Jesus, he launches into Jesus’ family tree – first from the way, way back into Moses-and-the-law-and-the-prophets part and then the more recent son-of-Joseph-from-Nazareth part.  Philip has the details.  After being found by Jesus, he makes known who Jesus is.  He’s laying out Jesus’ street cred to Nathaniel.  Now here’s where it gets interesting.  And here’s where I’d like us to spend some time.  Nathaniel says to Philip, “Can anything good come out of Nazareth?”  How snarky is that?  Philip is pumped up, super-excited and gets shot down by his buddy.  He has a song to sing about Jesus, he sings it, only to receive a snorting, derisive laugh from his unbelieving friend.

Think for a second about what you’re natural inclination is when that kind of thing happens to you – when you receive a snorting, derisive laugh from an unbelieving friend.

Maybe you go quiet, stunned that you’re unable to communicate this huge thing in a convincing way.

Maybe you get angry, shocked that your ideas and your excitement are so easily dismissed by a friend.

Maybe you get legal, spurned into creating an air-tight argument that builds the logical case for faith.  Your song gets shut down and you either shut-down or rev up the debate machine.

Personally, I’ve tried them all.  All of those responses have bubbled up without a lot of thought or clarity when someone goes snarky on who I think Jesus is.  I’ve gone quiet. I’ve gone angry and I’ve gone legal.  About eight years ago I handed out the book “Case for Faith” by Lee Strobel to a longtime friend.  She handed it back to me and said something like, “Well he argues out of the Bible and so you have to believe the Bible to believe his argument.”  In essence, she said to me, “Can anything good come out of the Bible?”

There is a YouTube video gone viral this past week called “Why I hate Religion but Love Jesus.”[1]   In his video, this young man is singing a song about Jesus while railing against his experience of the church.  In essence he is asking, “Can anything good come out of the church?”

“Can anything good come out of Nazareth?”

“Can anything good come out of the Bible?”

“Can anything good come out of the Church?”

It is my guess that many of us have taken our turns at being both Philip and Nathaniel.  We have tried to sing a song of Jesus, or quietly hummed one, and we have also tried to discredit someone’s faith-filled singing telegram filled with love for Jesus.

So Nathaniel troops off to meet Jesus.  And what does he do after his encounter with Jesus?  He sings his own song about Him.  Nathaniel says, “Rabbi, you are the Son of God! You are the King of Israel!”  From snarky unbelief to singing faithfulness, Jesus is the one who has seen it all and Jesus is the one who turns it all.  He turned it for Philip and then he turned it for Nathaniel.

The text isn’t entirely clear on when Nathaniel was under the fig tree or if anyone was with him.  I imagine him standing there under the fig tree with Philip while he proclaims his unbelief over and against Philip’s confessional song of Jesus and I can hear Philip’s call of, “Come and see,” to Nathaniel.  So then Jesus would have heard both the honesty of Nathaniel’s unbelief and the honesty of his confessional song.  This is a different slant on what it means to confess.  In the church we use the word a couple of ways.  Mostly we think of confession and forgiveness.  That there is something I need to come clean about so I confess to it, I fess up, I admit my wrongdoing.

Philip and Nathaniel’s confession is of a different sort.  They are making a declaration, making something known.  They are confessing who they think Jesus to be – much like we do when we confess the Apostle’s Creed together.  If the confessional songs of our ancestors in the faith hinge on meeting Jesus then what does meeting Jesus look like today.

Can anything good come out of Lutheran Church of the Master?

Can anything good come from us people whose snarky unbelief can sometimes seem to claim the day?  And to us Jesus says, “I have seen you when you were standing away from me under the fig tree in your unbelief just as I hear you confessing me now as Lord.”

And Jesus continues, “I see what you don’t do and what you do that hurts people.  I see the pain you inflict on your brothers and sisters in Christ and to other children of God by not giving, not forgiving, not helping, not loving.  I see your unbelief and I pour myself through it.”  In the last verse of the reading today Jesus says, “Very truly, I tell you, you will see heaven opened and the angels of God ascending and descending upon the Son of Man.”  In this he refers to himself on the cross as the redeemer of us – the ones who are least likely to succeed.

And Jesus also promises to send us with the power of his Spirit, working through us, revealing Himself through the active care of others.   So as we confess, as we declare, Jesus in word and action, led by the Spirit, Jesus says, “Yes, I have seen you under the fig tree but I also see you organizing canned food drives in your neighborhoods, sending teenagers and brave adult chaperones to New Orleans, tutoring the children at the elementary school, taking communion to the sick and hurting, praying for those who need help, building homes for the homeless, donating money and time and action to those who need it, walking toward the communion table together in your need for Jesus.”

By the power of the Holy Spirit, it is Christ in you who frees you into these things – these ministries that stretch you beyond your own self-interest into being the hands of Christ for each other and for the world.

By the power of the Holy Spirit, it is Christ in you who strengthens you to serve people in God’s name.

And, by the power of the Holy Spirit, it is Christ who inspires your confessional song of Jesus.

By the power of the Holy Spirit, may your song of Jesus be revealed to you by the One who came under a star to live in skin and solidarity with us!