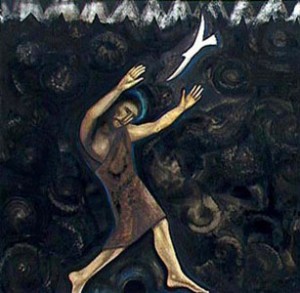 Luke 13:1-9 At that very time there were some present who told him about the Galileans whose blood Pilate had mingled with their sacrifices. 2 He asked them, “Do you think that because these Galileans suffered in this way they were worse sinners than all other Galileans? 3 No, I tell you; but unless you repent, you will all perish as they did. 4 Or those eighteen who were killed when the tower of Siloam fell on them–do you think that they were worse offenders than all the others living in Jerusalem? 5 No, I tell you; but unless you repent, you will all perish just as they did.”
6 Then he told this parable: “A man had a fig tree planted in his vineyard; and he came looking for fruit on it and found none. 7 So he said to the gardener, “See here! For three years I have come looking for fruit on this fig tree, and still I find none. Cut it down! Why should it be wasting the soil?’ 8 He replied, “Sir, let it alone for one more year, until I dig around it and put manure on it. 9 If it bears fruit next year, well and good; but if not, you can cut it down.’ ”

Those poor, poor Galileans.  Those poor, misguided religious pilgrims who walked and prayed and sacrificed as they put one foot in front of the other to acknowledge the God of their ancestors as they put their faith into action.  We can picture the earthy, rural Galileans laughing and crying with each other, with their families, while the rest of the city moves about its business.  And, then, out of nowhere, comes Pontius Pilate. The villain extraordinaire, the ne’er-do-well to end all ne’er-do-wells – the Pharaoh to the enslaved Israelites, the Osama bin Laden to millions of people both living and dead, the shooter in Newtown to our beloved children and teachers.  We can almost hear the hiss of the crowd as Jesus mentions his name.

Jesus speaks to them with the well-known traumas of the day fresh on everyone’s minds.  The people are pulsing with fear and survivor guilt as Jesus revisits the stories.  The people are looking for a comforting word – ears tuned, necks craned toward Jesus. And what does he do?  He disappoints them.

Perhaps this is where the fig tree can help us out. You all know this one right?  The parable of the barren fig tree has to be in the, what, top five most favorite parables ever?  Okay, so…no, not a well-known parable.  But this parable seems to follow Jesus’ calamity stories as some kind of explanation.

The vineyard owner is angry about a tree that has not borne fruit in three years and he wants to cut it down.  The gardener stalls the owner’s anger and asks for more time for the tree.  Take note that it is not more time for the same disappointing barrenness.  This is not a stay that delays an inevitable execution.  The gardener promises to tend this tree with fertilizer, giving it the chance to bear fruit, fruit that is worthy of the repentance from which it springs.

This is one of the reasons why speaking out loud the confession and forgiveness when we gather for worship feels like air to some of us.  Not by way of shaming but by way of naming, we confess and are brought together in the light of truth – the truth about ourselves, our need and our God.   Being named for who we are and what we have done is called judgment.  And as we listen to Jesus in the text today, Jesus very much connects sin and judgment.  This, of course, is totally fine when it’s someone else’s sin that gets questioned or named or judged.  It feels more than a little difficult when it’s our own.

During the Apostle’s Creed we name Jesus as the one who will come again to judge the living and the dead.  This isn’t a far off threat.  This is a promise here, in the moment of now.  We speak these words in spite of the bad rap that surrounds the notion of judgment.  Quite possibly one of the worse things to be labeled is “judgmental.”  And, yet, it is exactly judgment when God names something about us that is true, something we are in no rush to confess about ourselves.  It is God’s judgment that convicts us and draws us to the surrender of repentance.  And it is at that point where the gardener nourishes us.

God judges and God forgives in the proclamation of forgiveness.

God judges and God forgives in the waters of baptism.

God judges and God forgives in the bread and wine from Christ’s table.

God judges and God forgives in the reconciliation one to another in this body of Christ, this church.

God judges and God forgives as the one who resuscitates us and births divine love in our lives.

This IS the nourishment that is laid down around our dryness in the face of God’s judgment;

Nourished here, we can then sing with the Psalmist, “O God, you are my God, I seek you, my soul thirsts for you; my flesh faints for you, as in a dry and weary land where there is no water. 2 So I have looked upon you in the sanctuary, beholding your power and glory.  3 Because your steadfast love is better than life, my lips will praise you. 4 So I will bless you as long as I live; I will lift up my hands and call on your name. 5 My soul is satisfied as with a rich feast, and my mouth praises you with joyful lips 6 when I think of you on my bed, and meditate on you in the watches of the night;7 for you have been my help, and in the shadow of your wings I sing for joy. 8 My soul clings to you; your right hand upholds me.”