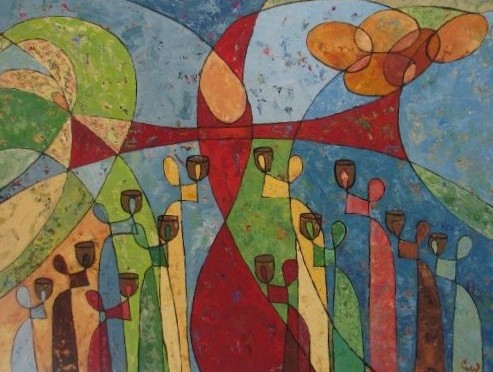 John 18:33-37 (and 38a) Then Pilate entered the headquarters again, summoned Jesus, and asked him, “Are you the King of the Jews?” 34 Jesus answered, “Do you ask this on your own, or did others tell you about me?” 35 Pilate replied, “I am not a Jew, am I? Your own nation and the chief priests have handed you over to me. What have you done?” 36 Jesus answered, “My kingdom is not from this world. If my kingdom were from this world, my followers would be fighting to keep me from being handed over to the Jews. But as it is, my kingdom is not from here.” 37 Pilate asked him, “So you are a king?” Jesus answered, “You say that I am a king. For this I was born, and for this I came into the world, to testify to the truth. Everyone who belongs to the truth listens to my voice.” 38 Pilate asked him, “What is truth?”

Revelation 1:4b-8 John to the seven churches that are in Asia: Grace to you and peace from him who is and who was and who is to come, and from the seven spirits who are before his throne, 5 and from Jesus Christ, the faithful witness, the firstborn of the dead, and the ruler of the kings of the earth. To him who loves us and freed us from our sins by his blood, 6 and made us to be a kingdom, priests serving his God and Father, to him be glory and dominion forever and ever. Amen. 7 Look! He is coming with the clouds; every eye will see him, even those who pierced him; and on his account all the tribes of the earth will wail. So it is to be. Amen. 8 “I am the Alpha and the Omega,” says the Lord God, who is and who was and who is to come, the Almighty.

Jesus is standing before Pontius Pilate in court.  They’re debating truth in weird slow-motion at a time when the stakes couldn’t be higher.  It matters who Jesus says he is because there are people, especially religious leaders, who have had it with him and simply want him to go away, squashed like a bug underfoot.  Here’s a sampling of the accusations against him…

There’s the Jesus who goes to weddings and gets frustrated with his mom but does what she says anyway – turning water into wine.

…the Jesus who wields a whip, clearing the temple of vendors who swindle the poor.

…the Jesus who talks new life with a fearful Pharisee in the middle of the night.

…the Jesus who meets a shady woman in the light of the noonday sun.

…the Jesus who heals and who feeds; who walks on water and who’s described alternately as being the word made flesh, the lamb of God, the Son of God, the King of Israel, the bread of life, the good shepherd, the light of the world, and the truth.

…the Jesus who quietly forgives and saves the woman caught in adultery from being executed, sending her on her way.

… the Jesus who cries with his friends Mary and Martha and who raises Lazarus from the dead.

…the Jesus whose feet are anointed with perfume in adoration.

…the Jesus who rides into Jerusalem on a donkey, strips down to his skivvies to wash his friends’ feet, and prays for his disciples,

…the Jesus who is criminalized for all of these things and finds himself standing in front Pontius Pilate arguing about truth before he is sentenced to death as the King of the Jews.

There are a number problems with Jesus being and doing any one of these things much less all of them. The time has come to face the music.  He’s in front of Pilate. Pilate is on the emperor’s payroll. He’s not much interested in the petty, internal squabbles of the Jewish religious leaders. He is, however, very interested in keeping the peace.  Uprisings are costly for the emperor and Pilate would pay the piper for upsetting the emperor.  It’s a lesser of the evils in his book and his self-interest is staying alive, thank you very much.  What does it matter that the truth is standing right in front of Pilate as he asks, “What is truth?”

We tend to think of truth as telling a story accurately.  We don’t tend to think of it as the story itself.  We rarely think of truth in terms of a person.  I’m curious about this line of digging.  The archaeology of it.  If each of us IS a “truth” claim, then what is that truth?  In other words, each moment of my life reveals what I think is important in terms of other people, myself, time, money, and God.  What would that archaeological dig look like?  What could you learn about the truth that is me or the truth that is you?  We’re all invested in different things.  We could even say we’re ruled by different things, justifying our choices until we make some kind of sense to ourselves.  An archaeological dig of this kind reveals what runs and rules our lives, revealing our actual king.

I’d like to pause and point out what just happened here because I think it happens a lot.  We start out talking about Jesus and we end up talking about ourselves.  The sermon began with parts of Jesus’ story from the Gospel of John and how he ended up in front of Pilate.  Talking about Pilate, turns us toward the topic of self.  Naturally, it would.  Pilate is such a great human example of what not to do in the name of self-interest.  It’s hard to resist distancing ourselves from him even as we ask the same question about truth.  But why is it so hard to shift ourselves to look at Jesus?  Much less to adore Jesus?

Adoration is part of Christ the King Sunday but it’s not the whole story.  The Feast of Christ the King is young in the church calendar.  Begun in 1925 by Pope Pius XI, its purpose is to compel our hearts, minds, and lives into the reign of God on earth over and above the pull of power in the world.[1]  Not a bad idea given the political disasters and brief pause between world wars in the 1920s.  Not a bad idea given the timeless appeal of trading grace for power. Christ the King Sunday is to the church calendar a bit like New Year’s Eve is to the Common Era Gregorian calendar that we use every day.

Next Sunday begins a new church year with the first Sunday in Advent.  Last year during Advent, I told you about my friend and colleague’s Advent discipline of choosing a word to help her focus on God during life’s hubbub. Step 1, she chooses one word from scripture at the start of Advent.  Step 2, she keeps the word on her radar for the whole year.  She talks about listening for the word in her scripture study and also in her life.  The word serves to keep God on her radar.  This year, I’m giving you a jump on choosing your word for the new church year.  Here’s your homework. Find a Bible reading and think through whether any of the words are worth choosing as your word for this church year.   Let me know what word you pick – e-mail it to me or post it to the sermon post.  A word that could become part of your discipleship, keeping faith front and center, and reminding you that you’re a subject of the realm of Christ’s kingship.  Yes, weird language but good for challenging for our democracy-trained brains.  Subjects of the realm, subjects of Christ’s realm – challenged by language that is other than how we’d ordinarily describe something.

Our devotion, adoration, and praise are for this king revealed in the person of Jesus. In the words from Revelation, we praise this God who is and who was and and who is to come through Jesus who loves us and frees us.  In our little corner of God’s whole church, we tend to do adoration with a reserved, earnest reverence.  Feeling it on the inside while the hymns keep things dignified. Leaving external exuberance to other siblings in Christ – well, unless you count being a super-fan of your favorite band or musical.  Maybe, though, that’s a hint of what some of us feel for Christ the King.  The love and gratitude for what is happening through Christ in kingdom moments breaking through on earth.  Christ’s kingdom of obedience to the command to love our neighbors as ourselves when it doesn’t serve our own self-interest. Christ’s kingdom of being loved by friends, family, and enemies…and even God…when we’re at our worst and don’t deserve it, even if that love is the tough kind that demands we face the pain we cause as individuals or groups.  Christ’s Kingdom is truth in the person of Jesus Christ who loves us. Love that inspires our praise and draws us into deeper love and faith.

We love you Jesus, Christ the King.  Help us love you more…