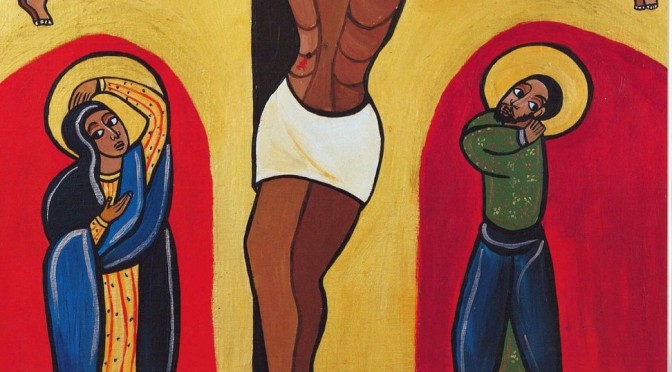 **sermon art by Laura James  [read more about Ms. James and her work at https://www.nydailynews.com/new-york/ny-caribbeat-laura-james-art-fights-coronavirus-panic-20200322-gomvswkmr5gwrnaxawcogzp6ma-story.html]

John 19:13–16 When Pilate heard these words, he brought Jesus outside and sat on the judge’s bench at a place called The Stone Pavement, or in Hebrew Gabbatha. 14Now it was the day of Preparation for the Passover; and it was about noon. He said to the Jews, “Here is your King!” 15They cried out, “Away with him! Away with him! Crucify him!” Pilate asked them, “Shall I crucify your King?” The chief priests answered, “We have no king but the emperor.” 16Then he handed him over to them to be crucified.

John 19:17-18, 25b–27 So they took Jesus; 17and carrying the cross by himself, he went out to what is called The Place of the Skull, which in Hebrew is called Golgotha. 18There they crucified him, and with him two others, one on either side, with Jesus between them. 25bMeanwhile, standing near the cross of Jesus were his mother, and his mother’s sister, Mary the wife of Clopas, and Mary Magdalene. 26When Jesus saw his mother and the disciple whom he loved standing beside her, he said to his mother, “Woman, here is your son.” 27Then he said to the disciple, “Here is your mother.” And from that hour the disciple took her into his own home.

John 19:28–34 After this, when Jesus knew that all was now finished, he said (in order to fulfill the scripture), “I am thirsty.” 29A jar full of sour wine was standing there. So they put a sponge full of the wine on a branch of hyssop and held it to his mouth. 30When Jesus had received the wine, he said, “It is finished.” Then he bowed his head and gave up his spirit. 31Since it was the day of Preparation, the Jews did not want the bodies left on the cross during the sabbath, especially because that sabbath was a day of great solemnity. So they asked Pilate to have the legs of the crucified men broken and the bodies removed. 32Then the soldiers came and broke the legs of the first and of the other who had been crucified with him. 33But when they came to Jesus and saw that he was already dead, they did not break his legs. 34Instead, one of the soldiers pierced his side with a spear, and at once blood and water came out.

John 19:38–39, 40–42 After these things, Joseph of Arimathea, who was a disciple of Jesus, though a secret one because of his fear of the Jews, asked Pilate to let him take away the body of Jesus. Pilate gave him permission; so he came and removed his body. 39Nicodemus, who had at first come to Jesus by night, also came, bringing a mixture of myrrh and aloes, weighing about a hundred pounds. 40They took the body of Jesus and wrapped it with the spices in linen cloths, according to the burial custom of the Jews. 41Now there was a garden in the place where he was crucified, and in the garden there was a new tomb in which no one had ever been laid. 42 And so, because it was the Jewish day of Preparation, and the tomb was nearby, they laid Jesus there…

At the end of March, my son texted me a link to John Krasinski’s first episode of “Some Good News.”[1] I laughed through tears watching it. Few of us are immune to the good feels inspired by grit and compassion. Cravings for good news intensify as disappointments and heartbreaks flow. Because we label events as good or bad, it makes it tough when something like Good Friday comes along. Jesus is betrayed, denied, executed, and buried. None of that is good – except for maybe the tender care his body received for burial. Sometimes a closer look is needed. For instance, Mr. Krasinski highlighted hospital workers on his show – the selfless care given by custodians, pulmonologists, and everyone else, to people suffering all kinds of health crises included coronavirus. Also highlighted was a 15-year-old girl named Coco who was coming home after finishing the final round of chemo that healed her cancer. Of course, the flipside of these two good news stories is that coronavirus demands a lot from hospital workers and that there is a 15-year-old who had cancer. News is not immune to these complexities. Well, at least human news is not immune to them.

Good Friday is no exception. Jesus’ death on the cross is chock-full of complexities. The cross reveals a lot all at once and the Gospel of John glories in the intricacy.[2]

The cross reveals a God who loves the world so deeply that becoming fragile and fleshy in Jesus was the go-to move. Jesus in the flesh is a mirror for us, reflecting our self-serving moves in the game we make out of the gift of life.[3] Jesus calls out our schemes better than anyone. Jesus knew Judas would betray him and that Peter would deny him.[4] There are reasons that the religious leaders were determined to have him killed.[5] Neither friend nor foe are left unscathed by Jesus’ truth-telling when it comes to the people we hurt or the way we hurt ourselves. His truth-telling frees us from the prisons we build for ourselves with illusions of perfection and invincibility. Not pain free but it IS good news.

The cross reveals a God who would rather die than raise a hand in violence against those who plot and execute his death sentence. When soldiers came for Jesus, he told Peter to put his sword away and healed the man injured by it.[6] Jesus’ message of God’s love for the world was so audacious that he was killed for it. He wasn’t caught off guard. His ministry of sharing God’s unconditional love could not go unnoticed. Self-sacrifice is something we understand when we experience it on our own behalf or hear a good news story about it. Jesus’ self-sacrifice reveals God’s grace that defies our understanding.

The cross reveals God suffering with us when we suffer. In Christian scripture, especially in the Gospel of John, the power of God is manifested in Jesus. Not responding in violence, Jesus suffered – which means that God knows suffering. We are not alone in our suffering whether it’s self-inflicted or comes out of nowhere. God’s light in Jesus shines in the darkness of suffering, shame, and fear, meeting us in the very place we think is furthest away from God.

The cross reveals relationships made new through suffering. Jesus spoke with his mother and friend before taking his last breath:

Jesus used his last breaths to reorient his mother and the disciple’s relationship toward each other. Everything leading to his crucifixion – healing the sick, exorcising demons, welcoming sinners, feeding the hungry, challenging corruption, exposing greed – everything Jesus did that hung him on the cross is continuous with the conversation he’s having with his mother and his friend. It’s the last thing he does before he announces, “It is finished.”[8]  He connects his friend and his mother to each other even as he’s reconnecting the world with God through the covenant of the cross.

Good Friday reminds us that God is in the covenant business. The cross as covenant cradles the truth about us in the hands of the one who opens his arms to all as he is crucified. God does the heavy lifting of cross beams and connection to set us free into God and toward each other. Yet there’s this tendency to act as if Jesus is going to return from the nastiness of the cross in an incredibly bad mood and hurt the very world God professes to love. We reduce God to a capricious, malevolent taskmaster who requires appeasement even as we’re told earlier in the Gospel of John that God did not send Jesus to condemn the world.[9]

But God is not diverted by our lack of will and misguided distortions. The eternal God entered time to reveal self-sacrificial, unconditional love and free us into God today and for all time. Today is Friday and we can call it Good. Today, we remember that God’s covenant with the world was finished on a cross and sealed by a tomb. Stay tuned for more good news…

…and receive this blessing…

May the God of cross and tomb guide you to obedience in love.

May Christ shine light into your darkness with the breadth of his grace, and

May the Holy Spirit deepen your + faith, hope, and love,

through all that is to come. Amen.

[2] “Glory” in the Gospel of John refers to Jesus’ death on the cross rather than glory as triumphal victory as we would typically understand it.