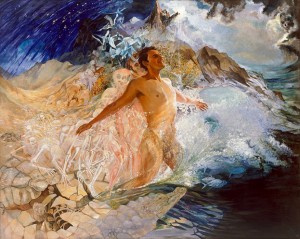 Ezekiel 37:1-3 The hand of the Lord came upon me, and he brought me out by the spirit of the Lord and set me down in the middle of a valley; it was full of bones. 2 He led me all around them; there were very many lying in the valley, and they were very dry. 3 He said to me, “Mortal, can these bones live?” I answered, “O Lord God, you know.”

John 20: 1-18 Early on the first day of the week, while it was still dark, Mary Magdalene came to the tomb and saw that the stone had been removed from the tomb. 2 So she ran and went to Simon Peter and the other disciple, the one whom Jesus loved, and said to them, “They have taken the Lord out of the tomb, and we do not know where they have laid him.” 3 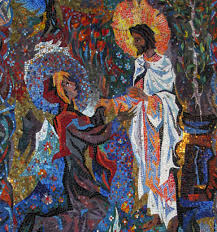 Then Peter and the other disciple set out and went toward the tomb. 4 The two were running together, but the other disciple outran Peter and reached the tomb first. 5 He bent down to look in and saw the linen wrappings lying there, but he did not go in. 6 Then Simon Peter came, following him, and went into the tomb. He saw the linen wrappings lying there, 7 and the cloth that had been on Jesus’ head, not lying with the linen wrappings but rolled up in a place by itself. 8 Then the other disciple, who reached the tomb first, also went in, and he saw and believed; 9 for as yet they did not understand the scripture, that he must rise from the dead. 10 Then the disciples returned to their homes. 11 But Mary stood weeping outside the tomb. As she wept, she bent over to look into the tomb; 12 and she saw two angels in white, sitting where the body of Jesus had been lying, one at the head and the other at the feet. 13 They said to her, “Woman, why are you weeping?” She said to them, “They have taken away my Lord, and I do not know where they have laid him.” 14 When she had said this, she turned around and saw Jesus standing there, but she did not know that it was Jesus. 15 Jesus said to her, “Woman, why are you weeping? Whom are you looking for?” Supposing him to be the gardener, she said to him, “Sir, if you have carried him away, tell me where you have laid him, and I will take him away.” 16 Jesus said to her, “Mary!” She turned and said to him in Hebrew, “Rabbouni!” (which means Teacher). 17 Jesus said to her, “Do not hold on to me, because I have not yet ascended to the Father. But go to my brothers and say to them, “I am ascending to my Father and your Father, to my God and your God.’ ” 18 Mary Magdalene went and announced to the disciples, “I have seen the Lord”; and she told them that he had said these things to her.

Have you ever had that moment when you realize you’re talking with someone you’re supposed to know?  Not recognizing them for whatever reason – maybe it has been awhile since you’ve seen them, maybe you’ve just met them only a couple of times, or maybe you went to elementary school with them a few years ago.  Then there’s that moment when something clicks and you realize you share a history with this person, however small it might be, and suddenly you’re in a different kind of conversation.  You might have people or stories in common so there are things to talk about beyond the small talk.  It’s a funny sweet spot between almost-friends and enough-strangers that you might even give each other some of the harder stuff from each other’s lives – getting laid off from work, marriage trouble, or child trouble.  When the conversation is over, you part ways, wondering about the moment of honesty.

It’s those moments of honesty that can feel like air to the dry and dusty places we don’t tell many people about.  Let’s face it, there are moments in life when things going on around us and in us feel like that valley of the dry bones in the reading from Ezekiel.  In the story, the Lord asks the question, “Mortal, can these bones live?”  And receives the answer, “Oh, Lord God, you know.”

What do we know?  Like Peter and the other disciple, we can know what we see but it doesn’t mean we understand very much.  The Bible story tells us that they see the tomb is empty and believe but “as yet they did not understand the scripture.”[1]  The evidence of tomb is examined.  It is indeed empty.  And then they go home believing what exactly?  That the tomb is empty?

Mary Magdelene stays in the garden. It’s mentioned four times that she is weeping. Her eyes, already puffy from lack of sleep during the crucifixion, must be an absolute mess as she walks around the garden crying.  The body of her teacher who was killed is now missing.  She runs into a stranger…maybe he’s the gardener…and she asks him whether or not he took the body somewhere else.  Confusion rules the moment.  It’s difficult to know what to believe.

Last Sunday afternoon, I left church in time to get my daughter over to her behind-the-wheel drive time.  I might add that I have her permission to share this story with you.  Still in my suit and pastor’s collar, the driving instructor asked me a few questions about Taryn’s driving followed by a few extra questions about whether I am called priest or pastor and where my church is located.  In turn, I learned a little about how he became a driving instructor.  Then off the two of them went in the well-marked student driver car.

Picking her up afterwards, we talked a little about her drive.  After a lull in the conversation, she told me that the instructor asked her this question, “If you could describe religion in one word, what would it be?”  She told him, “Hope.”  I asked her if he came up with a word.  He apparently chose, “Comfort.”  There are many things that I think are interesting about the two of them having this conversation.  The relevant one today is that neither one of them picked words like ‘truth’ or ‘certainty’ or ‘goodness’.  They did, however, pick words that capture the essence of the Easter story.

Like the disciples at the tomb, we see and believe in our experiences but don’t really understand them all that well.  Like Mary Magdalene, we have trouble recognizing the resurrected Jesus.  He had to recognize her first, calling her out of her moment of despair and calling her into his resurrected life.

This is all well and good for Mary.  She was confident enough in her encounter with the risen Jesus that she ran off to tell the other disciples.  But what about us, here, today?  Apparently the resurrection obscures who God is until God reinitiates contact by recognizing us and calling us by name.[2]  Calling us by name out of our place of sin or, like Mary, out of our place of despair.

One of the ways this happens is among people like all of us together here today. We know what some of our flaws are, the sin that hurts others people and ourselves.  And we know we know what some of the good in us is, created in the image of God.  We bring our worst and our best into the time we worship God.  We are almost-friends and enough strangers to be in some honest conversation.  Part of that honesty is recognizing that the mystery of what God does through the cross, tomb, and resurrection has little to do with a method for living life.   Cross, tomb, and resurrection are how we experience life – the pain of it AND the joy of it.  We know what God knows – these dry bones most certainly can live!

The church is the body of Christ, people of the cross and resurrection given new life in the waters of baptism, new life through Christ in the bread and wine of communion, and new life in each other.  Jesus Christ, who was crucified, God has raised! In that resurrection God gives us hope, the promise of life, the promise that God is with us now, and that even death cannot defeat the power of God for us and for all the world![3]

Romans 6:3-6 Do you not know that all of us who have been baptized into Christ Jesus were baptized into his death? 4 Therefore we have been buried with him by baptism into death, so that, just as Christ was raised from the dead by the glory of the Father, so we too might walk in newness of life. 5 For if we have been united with him in a death like his, we will certainly be united with him in a resurrection like his. 6 We know that our old self was crucified with him so that the body of sin might be destroyed, and we might no longer be enslaved to sin.