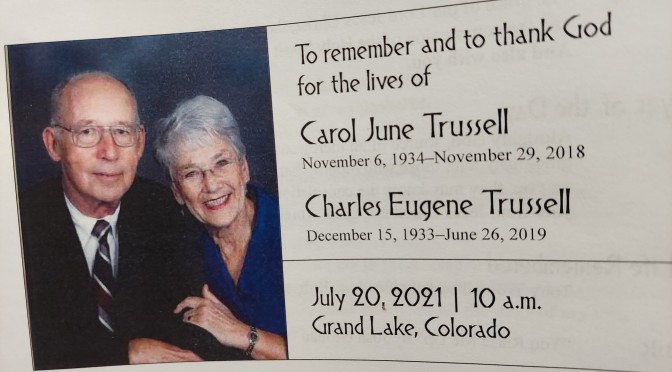 Caitlin Trussell with family and friends in Grand Lake

Romans 8: 35, 37-39  Who will separate us from the love of Christ? Will hardship, or distress, or persecution, or famine, or nakedness, or peril, or sword? 36As it is written, “For your sake we are being killed all day long; we are accounted as sheep to be slaughtered.” 37No, in all these things we are more than conquerors through him who loved us. 38For I am convinced that neither death, nor life, nor angels, nor rulers, nor things present, nor things to come, nor powers, 39nor height, nor depth, nor anything else in all creation, will be able to separate us from the love of God in Christ Jesus our Lord.

John 2:1-11  On the third day there was a wedding in Cana of Galilee, and the mother of Jesus was there. 2Jesus and his disciples had also been invited to the wedding. 3When the wine gave out, the mother of Jesus said to him, “They have no wine.” 4And Jesus said to her, “Woman, what concern is that to you and to me? My hour has not yet come.” 5His mother said to the servants, “Do whatever he tells you.” 6Now standing there were six stone water jars for the Jewish rites of purification, each holding twenty or thirty gallons. 7Jesus said to them, “Fill the jars with water.” And they filled them up to the brim. 8He said to them, “Now draw some out, and take it to the chief steward.” So they took it. 9When the steward tasted the water that had become wine, and did not know where it came from (though the servants who had drawn the water knew), the steward called the bridegroom 10and said to him, “Everyone serves the good wine first, and then the inferior wine after the guests have become drunk. But you have kept the good wine until now.” 11Jesus did this, the first of his signs, in Cana of Galilee, and revealed his glory; and his disciples believed in him.

In the Bible story about the wedding at Cana, we remember that Jesus’ ministry came to life during a celebration of marriage. The wedding is part of what makes this a great story to celebrate Carol and Charlie’s lives and their life together. Married at 18 and 19 years old, their adult lives were shaped by each other. Sometimes fun and sometimes fiery and other times everything in between, many of us sitting here today are here because they found each other.

My first encounter with them was at a wedding on the west coast. When Rob and I pulled into the parking lot, Charlie and Carol were standing on the sidewalk waiting for us. Charlie was smiling and calm, and Carol was smiling with mischief in her eye and sassily showing a bit of leg. Rob said, “Yup, that’s my mom.” At that same wedding, she also told me that she wanted brown-eyed grandchildren although she’d end up having to wait until the great-grandchildren arrived to get her wish.

Weddings are about hope. We all know the highs and the lows are coming. But the day itself is about hope. It’s fitting that Jesus’ first miracle happened at a wedding. It’s surprising that we get to talk about good wine by the gallon – especially because Mary had to step in with firm motherly encouragement. Jesus tried to tell his mother that it wasn’t his time.  Apparently he thought he had some living to do when he said that his “hour had not yet come.”  Jesus, speaking of his hour and turning the water into wine, foreshadows his death on a cross – when he drinks sour wine from a cloth just before the hour of his death.

We heard a Thanksgiving for Baptism this morning. Our baptism immerses us in Christ’s death and unites us with Christ in his resurrection.  The wedding at Cana gives us a glimpse of this connection between Jesus’ life and death and life, with Carol and Charlie’s completion of their baptismal journey through the cross of Christ.  As he did at the wedding, Jesus celebrates our joys, our highpoints and our relationships with us.  And Jesus’ life, ending on a cross, brings life and hope to our suffering through that very same cross.  How does this hope take shape?  First by naming suffering for what it is – just like in the reading from the book of Romans that names tragedy as hardship, distress, persecution, famine, peril, nakedness, sword; just like our reason for being here today is Charlie and Carol’s lives and their deaths.  And also by naming the good and the love and the hope lived in their lives too.  Naming the celebration of life and naming the struggle of not having them with us.

The last dinner that Charlie ate was ice cream – which surprises absolutely no one. The hospice had a connection with a family candy business that also made ice cream. He was asked how it was and Charlie said, “It’s worth dying for.” There was this pause in the room and then we all just cracked up.  That moment was quintessential Charlie, a classic one-liner that lightened the mood.

As we share stories to celebrate Carol and Charlie, there’s a temptation at funerals we can accidentally veer towards. Before we know it, our stories try to prove their goodness before God and position them in right relationship with God with a list of the good. The list becomes a bit like Santa’s naughty and nice tally.  But Jesus doesn’t give as the world gives.  He does NOT tally.

If his death on the cross means anything, it means that God is not in the sin accounting business. Another way to say it is that it’s not about what we’re doing, it is all about what Jesus does for us.  God’s promises through Jesus.  We hear these promises and still we’re tempted to ask “BUT what about WHAT I’M supposed to do?! Have I done enough to make myself right with God?! Has Charlie? Has Carol?” It’s hard for us to believe that what Jesus accomplished on the cross is enough for us and for them to live into God’s future of hope.

The truth that being human involves real suffering and pain.

The truth of God’s self-sacrificing love.

The truth that God would rather die than raise a hand in violence against the world that God so loves.

The truth that forgiveness comes from the cross as Jesus says, “Father, forgive them, for they know not what they do.”

The truth about the unflinching love of God in the face of our failures.

The Bible emphasizes the power of God in Jesus. Jesus, who is God. God, who is Jesus. Jesus whose life reveals God’s love and care for all people regardless of class, gender, or race.  Jesus whose ministry of God’s unconditional love led to his execution on a cross. Another truth of the cross is that God knows suffering. More than that, the cross reveals the mystery of God suffering with us when we suffer.  Not to say that we rejoice because we suffer but rather, we are reassured of God’s love even in the midst of our suffering.

Through the suffering of self-sacrificing love, Jesus laid his life down on a cross and, through an empty tomb, now catches death up into God, drawing Carol and Charlie into holy rest where suffering is no more, and joy never ends.