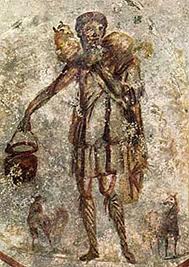 John 10:11-18  “I am the good shepherd. The good shepherd lays down his life for the sheep. 12 The hired hand, who is not the shepherd and does not own the sheep, sees the wolf coming and leaves the sheep and runs away—and the wolf snatches them and scatters them. 13 The hired hand runs away because a hired hand does not care for the sheep. 14 I am the good shepherd. I know my own and my own know me, 15 just as the Father knows me and I know the Father. And I lay down my life for the sheep. 16 I have other sheep that do not belong to this fold. I must bring them also, and they will listen to my voice. So there will be one flock, one shepherd. 17 For this reason the Father loves me, because I lay down my life in order to take it up again. 18 No one takes it from me, but I lay it down of my own accord. I have power to lay it down, and I have power to take it up again. I have received this command from my Father.”

I have this memory of an image from childhood.  I’m not sure where it comes from or how old it is.  You may know the kind.  It’s a little hazy around the edges and slightly out-of-focus but a couple of things come through in crisp outline and color.  It pops into my head of its own accord when I hear Jesus talking about being the Good Shepherd.  In this image, Jesus is laughing in a group of children who are also laughing and he is holding a little lamb.  And, after my initial freak-out about overly-sentimentalized religion that would domesticate God, this image rings true for me as I think about the story a friend of mine tells about his Hebrew Bible professor tucking in her children at night.[1]  When she tucks them in she asks them, “Who are you?”  And they reply, “I am Jesus’ little lamb” – a sweet image of mothering and bedtime as she sends her children into the shadows of sleep.  And it rings true for me when I sit with families during funeral planning and they choose Psalm 23 time and time again.  I can hear the psalmist crying out through the families’ tears and from their broken hearts, “The Lord is my shepherd…”

And, for some of us, there are times when it is enough and sometimes quite necessary to allow those texts to wrap around us in the sweet, simple comfort of being cherished and celebrated as Jesus cradles us in light.  But what else might these texts have to say to us?

Wondering about Jesus’ claim of being a Good Shepherd is a good place to begin.  Psalm 23 gives us a glimpse into one of early Judaism’s understandings of God as shepherd.  And the words of Jesus echo deeply from within this tradition as he says, “I AM the good shepherd.”  The ante is upped as Jesus also says the words, “I AM”.  The “I AM” at the beginning of his words is the same “I AM” used in the divine claim by God, by Yahweh, in the Hebrew Scriptures.  Jesus statement is infused with so much divinity it simply spills out all over. In fact, it is THE claim that sets the cross in motion.  The bottom line for us today?  God is made known in Christ.[2]  But how so according to John?

Jesus says, “I am the good shepherd. The good shepherd lays his life down for the sheep.”   Jesus is the good shepherd who died.  There’s a leadership model that would climb the bestseller list today.  A good leader is a dead one?  Why is this?  How is this a good thing?  How is the good shepherd the one who would lay his life down?  Why does the church call the day of Jesus’ crucifixion “Good Friday” anyway?  I know, that last question seems a bit out of order in this exuberant season of Easter resurrection but I will take the liberty of asking it anyway.  How is any of this good?  It is good because God in Jesus, dead on the cross, reveals the depths of God’s love and the lengths to which God will go to wrap us into God.  Belonging to a crucified God doesn’t mean that God is dead but that death is now captured up in the living God.

Jesus tells the story of the good shepherd not in an idyllic, cozy, safe location as my determined memory of the smiling image of Jesus from childhood would suggest.  In this story, there is howling that warns of threat and danger and hired hands who run away in fear, leaving the sheep to the wolf, leaving the sheep to death.  Ultimately the wolf means death in this story.  This infuses quite a different urgency into the mother tucking in her child at night and asking, “Who are you?”  And the child saying, “I am Jesus’ little lamb.”  The sweet image of mothering at bedtime, as she sends her children into the shadows of sleep, reverbs within a fiercer promise of love and protection.  And the wolf’s howl intensifies the prayers of a family and a community as they pray the words of Psalm 23 together during a funeral – “yea, though I walk through the darkest valley, (through the valley of the shadow of death), I will fear no evil.”

One of the things that I am privileged to do with my time over the last year while awaiting a call to a congregation is funerals – lots of them.  All excepting one have been the kind where I receive the call from the funeral director that a family is asking for a Christian minister to be the officiant for their loved one’s funeral within the following three to five days.  Either they or the person they have lost to death are often long unaffiliated with or never been part of any faith community and the element of having a Christian minister seems important.

One could argue lots of things – that there request for a minister is simply an example of a family hedging their bets or covering their bases or whatever might work as a metaphor for thinking their motivations shallow.  Or it could be that it is something that is a supposed-to-be-done.  In some of the stories these lines of thinking might be true.

But as I speak with these families, often torn open by their person’s death and their own grief, there is something more going on.  That something more has to do with the ways in which meaning in their lives had been suddenly shattered into a million pieces.  What had once made sense from the sum of their experiences and gave life meaning, no longer does.  Something more is needed.  This “something more” that is needed is a word that comes from outside of their own experience.  The story of the good shepherd offers meaning not crafted from within ourselves.  Rather it comes from beyond our experience – gifted to us from outside of ourselves through the cross of the one who laid his life down.

“Into your hands, O merciful God, we commend your child. Receive her into the arms of your mercy, into the blessed rest of everlasting peace, and into the glorious company of the saints in light.  Amen.”

When I pray this prayer on behalf of the one who has died, I take quite seriously in our text today, when Jesus says, “I lay down my life for the sheep. I have other sheep that do not belong to this fold. I must bring them also, and they will listen to my voice. So there will be one flock, one shepherd.”

So hear this gift, the promise of the good shepherd for you this day of Easter resurrection…

By the power of the Holy Spirit of the risen one who first laid his life down,  Jesus draws you through the cross of Christ into faith, into meaning, into new life.

Jesus, the good shepherd, laid down his life and took it up again for you.

Death is now caught up into God, for you.

New life is here and now, in you and for you, by the power of the risen Christ!