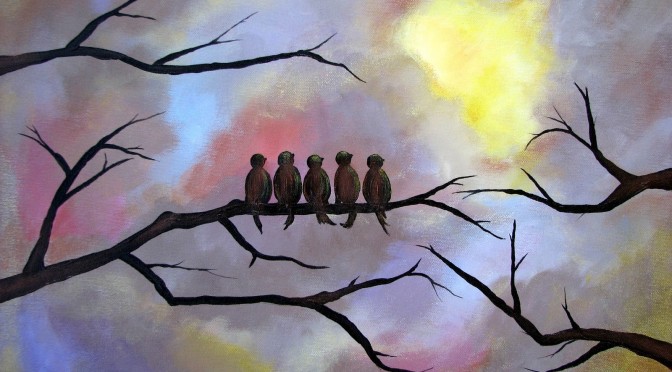 **An Artist’s Canvas by Stacey Zimmerman, A Painting Inspired by Friendship: Birds of a Feather

Caitlin Trussell with Augustana Lutheran Church on May 9, 2021

John 15:12-17 [Jesus said:] 9“As the Father has loved me, so I have loved you; abide in my love. 10If you keep my commandments, you will abide in my love, just as I have kept my Father’s commandments and abide in his love. 11I have said these things to you so that my joy may be in you, and that your joy may be complete.
12“This is my commandment, that you love one another as I have loved you. 13No one has greater love than this, to lay down one’s life for one’s friends. 14You are my friends if you do what I command you. 15I do not call you servants any longer, because the servant does not know what the master is doing; but I have called you friends, because I have made known to you everything that I have heard from my Father. 16You did not choose me but I chose you. And I appointed you to go and bear fruit, fruit that will last, so that the Father will give you whatever you ask him in my name. 17I am giving you these commands so that you may love one another.”

Acts 10:44-48 While Peter was still speaking, the Holy Spirit fell upon all who heard the word. 45The circumcised believers who had come with Peter were astounded that the gift of the Holy Spirit had been poured out even on the Gentiles, 46for they heard them speaking in tongues and extolling God. Then Peter said, 47“Can anyone withhold the water for baptizing these people who have received the Holy Spirit just as we have?” 48So he ordered them to be baptized in the name of Jesus Christ. Then they invited him to stay for several days.