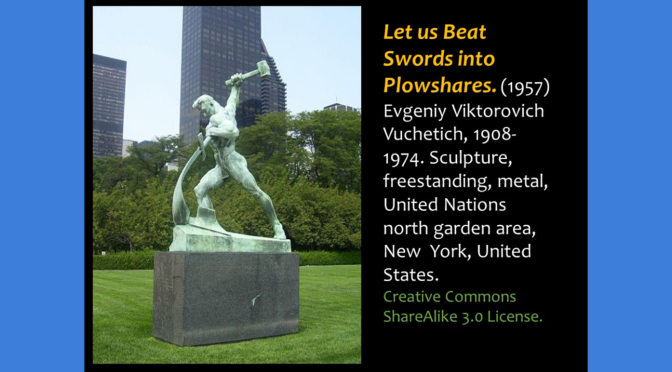 Isaiah 2:1-5 The word that Isaiah son of Amoz saw concerning Judah and Jerusalem. 2 In days to come the mountain of the Lord’s house shall be established as the highest of the mountains, and shall be raised above the hills; all the nations shall stream to it. 3 Many peoples shall come and say, “Come, let us go up to the mountain of the Lord, to the house of the God of Jacob; that he may teach us his ways and that we may walk in his paths.” For out of Zion shall go forth instruction, and the word of the Lord from Jerusalem. 4 He shall judge between the nations, and shall arbitrate for many peoples; they shall beat their swords into plowshares, and their spears into pruning hooks; nation shall not lift up sword against nation, neither shall they learn war any more. 5 O house of Jacob, come, let us walk in the light of the Lord!

One candle lit and we’re on our way OR, as our song went today, God’s kingdom is on its way, and, in fact, God’s kingdom is already here. Whew! Thank God! Because to hear our readings might give one pause to fear something terrible and rash is about to happen. Immersed in a culture that pivots around the idea that people get what they deserve – whether its wealth or punishment – it’s easy to become people who hope that other people get what they have coming to them.  Not us, though. Funny how that works. That wishing that other people get what they have coming never includes those of us who think those thoughts. Oh sure, grace is a good theory, but it’s not actually how the world works, we think to ourselves. Or perhaps that thought isn’t even conscious. Our unconscious thought is that grace doesn’t or can’t really function in the world.  With a gospel book like Matthew, that line of thinking may be understandable.

One of my favorite theologians is Rene Girard.[1] Originally an anthropologist and an atheist, he began to study the writings of major world religions for their practices of scapegoating. Scapegoating is the way groups identify someone in their midst who must be expelled for the group to survive. Group anxiety goes up. A source for that anxiety needs to be identified. Once identified, the source, the scapegoat, needs to be destroyed or at least kicked out of the group. Girard specialized on the topic through his study of apes and wanted to see how humans went about it.  Late in life, Girard concluded that Christianity was unique among world religions for its vehement rejection of scapegoating and the assertion that the human family was called to move beyond it – the parable of the Good Samaritan loving-neighbor-as-self is the case in point.[2] As Girard’s argument goes, Jesus was the ultimate and final scapegoat through his self-sacrifice on the cross. His nonviolent consent to his death subsumed the violence inflicted on him into himself and negated it. At the same time, Jesus’ death reveals our tendency to inflict violence and justify scapegoating.

We find ourselves scapegoating right down to our least favorite books of the Bible. Well, perhaps you don’t.  I’ll speak for myself.  I scapegoat right down to my least favorite books of the Bible.  The Gospel of Matthew falls in the top tier.  I find its focus on who’s in and who’s out a bit exhausting. No surprise, really, given how I was raised in a different denomination that preached the heck out of misguided rapture theology.  Recently, the Girardian Lectionary website encouraged readers to lean into the books of the Bible in which we struggle, the books we’re inclined to scapegoat. No time like the present given that today, December 1, begins a new church year centered by the Gospel of Matthew.  We’ll get a lot of Matthew over the next year. Happy New Year, people! Here’s the thing. Lutherans claim that the Holy Spirit shapes us through scripture, shattering our tightly held assumptions, and reforming us. This claim is true even in my hesitation about Matthew. I’d even go so far as to say it’s especially true about the Bible books we feel need not apply to our lives.

The Gospel of Matthew was likely written late in the first century, after the destruction of the Jerusalem Temple, fifty years after Jesus’ death. The Matthean community seems to have been primarily Jews who believed Jesus was their long-awaited savior. Initially a part of life in the synagogue, a conflict began with either other Jews, or with Roman authorities, or both, that escalated to the point of the Matthean group splitting off to form its own community.[3]  The book is deeply concerned about true and false belief and God as the final judge. The verses today are a good example of the divide as well as illuminates what we think we already know about these verses.  For instance, in this story, is it better to be taken or left behind?  The comparison with the people swept away by the flood in the Noah story indicates that being left behind might be the better outcome. If it’s the case that being left behind is the better option, it brings up another question. Who is doing the taking? The verses aren’t clear which opens the possibility that there’s a group, perhaps Roman agents, who is taking some people while others remain – not unheard of in the Roman Empire or modern empires for that matter.  If it’s possible that Rome is snatching people, why are we so quick to read it as divine judgment.

It’s curious that we’re more inclined to believe in divine punishment than mercy. Or perhaps it’s more accurate to say that we’re cool if that punishment applies to someone else. Out of that desire for retribution, even if we know better than to say it out loud, we can see how it’s possible to create God in our own violent image. But the birth we celebrate on Christmas and the return we actively wait for both hinge on the cross of the Savior who would rather die than raise a hand in violence against the world beloved by God. Isaiah envisions a Peaceable Kingdom with these words – “…they shall beat their swords into plowshares, and their spears into pruning hooks.”  No more learning war.  Perhaps John Lennon’s song “Imagine” had a bit of Biblical influence imagining a future in which non-violence becomes possible.  For Matthew’s Gospel it was difficult to imagine even though Jewish scriptures run throughout the whole thing. This Gospel is deeply connected to the Jewish covenants through Abraham and following.[4]  When you get a chance, read Jesus’ genealogy in the first chapter of Matthew. Web search those names to find their story in the Old Testament. The genealogy is more legal than biological as Matthew goes on to tell Jesus’ birth story. But among the stalwart patriarchs in the list of names are surprising characters, including five women, that become part of God’s story through unexpected or unconventional ways.[5]  Actually, don’t stop at the genealogy, read the whole book of Matthew as we begin our year within its chapters. Underline things you like. Jot a question mark by things that are confusing or troubling. The gospel of Matthew was written in a community that experienced polarization and tension about their Jesus claims with other groups.

Those tensions between the groups play out in some big language and rhetoric. But other, deeper tensions are also playing out in Matthew’s story of Jesus – Emmanuel, God with us – “between the expected and unexpected, between the old and the new, between sternness and mercy, and between respectability and scandal.”[6]  Through these stories, the Holy Spirit brings new life to fragile faith and heals soul deep wounds. The whispers of hope have begun this Advent during which we’ll hear the promise to Mary – that she’ll conceive and bear a son, name him Emmanuel which means “God is with us.”[7] Hope arriving through the baby we’ll celebrate and the return of Emmanuel who showed us the natural end of our violent scapegoating while showing us a different, peace-filled way forward as we stay awake and watchful.  Thanks be to God and Amen.

[1] Read more about Rene Girard and his work at girardianlectionary.net

[4] Matthew 1:1-17 see Jesus’ genealogy and note both the stalwart and surprising players in the list.