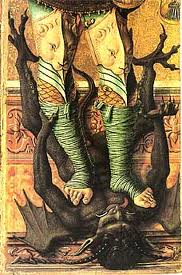 20 and the crowd came together again, so that they could not even eat. 21 When his family heard it, they went out to restrain him, for people were saying, “He has gone out of his mind.” 22 And the scribes who came down from Jerusalem said, “He has Beelzebul, and by the ruler of the demons he casts out demons.” 23 And he called them to him, and spoke to them in parables, “How can Satan cast out Satan? 24 If a kingdom is divided against itself, that kingdom cannot stand. 25 And if a house is divided against itself, that house will not be able to stand. 26 And if Satan has risen up against himself and is divided, he cannot stand, but his end has come. 27 But no one can enter a strong man’s house and plunder his property without first tying up the strong man; then indeed the house can be plundered. 28 “Truly I tell you, people will be forgiven for their sins and whatever blasphemies they utter; 29 but whoever blasphemes against the Holy Spirit can never have forgiveness, but is guilty of an eternal sin”— 30 for they had said, “He has an unclean spirit.” 31 Then his mother and his brothers came; and standing outside, they sent to him and called him. 32 A crowd was sitting around him; and they said to him, “Your mother and your brothers and sisters are outside, asking for you.” 33 And he replied, “Who are my mother and my brothers?” 34 And looking at those who sat around him, he said, “Here are my mother and my brothers! 35 Whoever does the will of God is my brother and sister and mother.”

Depending on your background, talking about sin and evil may be as natural as your need to eat or may be as uncomfortable as stepping on broken glass or may be as completely irrelevant as what someone in Alaska is having for breakfast.  I have spent time in all of three of those reactions to sin and evil.  But the most important came to pass when I was in seminary.  I had a professor who is originally from Zimbabwe in Africa.  He spent a lot of time discussing the current conditions in his home country which at that time were not good and getting worse.  He also spent some time talking about sin and evil.

American culture is difficult to pin down as any one thing.  However, there is a lot of time spent using the language of tolerance.  I, for one, am grateful that tolerance is at the forefront of many people’s minds and it has been incredibly important for all of our coexisting on the planet together.  However, the shadow side of tolerance is that it can result in live-and-let-live ways even as people are suffering and dying at the hands of other people or suffering and dying by their own hands.  These live-and-let-live ways can leave us without the words to see the problems and without ways to solve them.  So then, sin and evil are a way to name what is happening in order that it might be confronted and changed.

Today’s texts are swimming in this stream of thought.  In Mark, Jesus’ family is highly worried that he’s lost his mind.  Think for a moment about someone you know who struggles with mental illness and how much pain it causes both that person and the people around them.   I imagine Jesus’ family in that kind of moment; in the awareness that Jesus’ actions are not going to come to anything good.  And, in fact, Jesus causes so much disarray that someone calls the scribes, who are the religious big guys, to come from Jerusalem to straighten it all out and they begin the name-calling with “Beelzebul.”  Notice for a moment that no one calls Jesus a fake.  From what has been seen of Jesus so far there has left three options – one, that Jesus is of God; two, that Jesus is crazy; or three, that Jesus is of the demonic.  No one in the story – neither family, nor the religious leaders – is prepared for the “of God” label so Jesus must either be crazy or demonic.

And Jesus, what does he do?  He cuts to the chase.  He goes “all in” with naming Satan and telling the parable of the strong man.  No watered-down language here.  And this is really an important place to pause and take notice.  Jesus is calling a thing what it is.  Jesus is calling evil what it is.  Jesus is truth telling about evil.  Jesus has come to plunder Satan’s household and liberate the world from evil.  This message is so strong in the Gospel of Mark that some have said that Mark tells this whole story of Jesus – from baptism to the cross – as one long exorcism of the whole planet.  Of Jesus’ ultimate victory over evil that will one day see its final end.

The Genesis text gives us a beginning for the final end to sin and evil.  This is a really complicated text and deserves its own sermon…or two…or three.  There are two things I want to say here.  The first is that this text has been interpreted poorly and used quite badly against women throughout the centuries.  This is wrong to do and there are many, many academics, theologians and pastors – faithful men and women – who write volumes on this.  With that being said, the second thing I want you to notice is about what God doesn’t say to Adam and Eve.  While there are consequences to their actions, God doesn’t say, “I’m going to hang out here, good luck making your way back.”  No, God doesn’t say this or anything like it.  Where does God go?  God goes out into the world with them.

So however we imagine that scene in the garden coming down, erase the one with God’s finger pointing them out and re-imagine one where God moves out into the world with them.  Because that is where God went then and where God is now.

God’s living presence in the world is especially important to this story about Jesus in Mark.  Jesus is blowing open the way people think about God being active in the world.  Listen carefully to verses 28 and 29 in the Mark text as Jesus says, “Truly I tell you, people will be forgiven for their sins and whatever blasphemies they utter; 29 but whoever blasphemes against the Holy Spirit can never have forgiveness, but is guilty of an eternal sin.”  Much has been made of blaspheming the Holy Spirit and what that could possibly be about.

This takes us back to the language of sin and evil.  It is difficult to explain the horrible things that happen to us and the horrible things that we do to ourselves and others without talking about sin and evil.  And it is difficult to talk about forgiveness when someone or a group of people think there is nothing for which they need to be forgiven.  I’ve been working my way very slowly through a book called, “No Future Without Forgiveness” by Desmond Tutu.  Desmond Tutu was the Archbishop of Capetown, South Africa, during and after a long peroid time that was filled with horrific white on black violence and oppression.  He is a black Christian leader in the Anglican tradition who was part of a large group of people responsible for moving the country forward after the election of Nelson Mandela, the country’s first black president, in 1994.

Desmond Tutu writes about the key pieces of moving forward in forgiveness.  These key pieces include balancing “the requirements of justice, accountability, stability, peace and reconciliation.”[1]  In order for all of that to happen, those victimized over decades had to be open to forgiving those who hurt them and those who were the oppressors needed to admit what they had done.  The victims, the perpetrators and the leadership involved showed the power of this level of forgiveness in all that has happened in South Africa since that time.

What happened in South Africa was possible, in part, because there was the use of the language of sin and evil.  The very language that Jesus is using in Mark allows things to be called by their proper name so that they may be handled.  Jesus calls Satan, “Satan,” and Jesus calls forgiveness of sins, “forgiveness of sins.”

And here is the good news of what gets handled.  You…you get handled by Jesus Christ as he opens up his arms to include more than just his relatives into the fullness of what he has done.  By the power of his Holy Spirit, your sins are forgiven.  And few say what this experience is like better than St. Paul.  Listen as he writes words of encouragement to the Corinthians:

“But just as we have the same spirit of faith that is in accordance with scripture—”I believed, and so I spoke”—we also believe, and so we speak, 14 because we know that the one who raised the Lord Jesus will raise us also with Jesus, and will bring us with you into his presence. 15 Yes, everything is for your sake, so that grace, as it extends to more and more people, may increase thanksgiving, to the glory of God. 16 So we do not lose heart. Even though our outer nature is wasting away, our inner nature is being renewed day by day. 17 For this slight momentary affliction is preparing us for an eternal weight of glory beyond all measure, 18 because we look not at what can be seen but at what cannot be seen; for what can be seen is temporary, but what cannot be seen is eternal.  5:1 For we know that if the earthly tent we live in is destroyed, we have a building from God, a house not made with hands, eternal in the heavens. For in this tent we groan, longing to be clothed with our heavenly dwelling.”

In living, in dying and in rising for you, Christ brings wholeness and healing into you by the forgiveness of your sins.

So I say again, by the power of the Holy Spirit, your sins are forgiven.