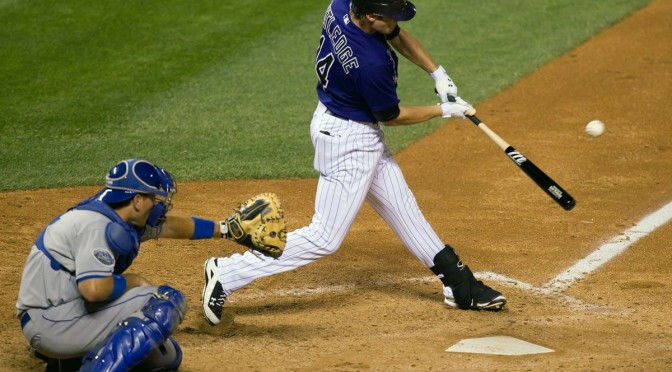 Photo credit:  Josh Rutledge #14 of the Colorado Rockies hits an RBI single during the sixth inning against the Los Angeles Dodgers at Coors Field on August 27, 2012 in Denver, Colorado. (Photo by Justin Edmonds/Getty Images)

Mark 8:31-38  [Jesus] began to teach them that the Son of Man must undergo great suffering, and be rejected by the elders, the chief priests, and the scribes, and be killed, and after three days rise again.32He said all this quite openly. And Peter took him aside and began to rebuke him. 33But turning and looking at his disciples, he rebuked Peter and said, “Get behind me, Satan! For you are setting your mind not on divine things but on human things.”
34He called the crowd with his disciples, and said to them, “If any want to become my followers, let them deny themselves and take up their cross and follow me. 35For those who want to save their life will lose it, and those who lose their life for my sake, and for the sake of the gospel, will save it. 36For what will it profit them to gain the whole world and forfeit their life? 37Indeed, what can they give in return for their life? 38Those who are ashamed of me and of my words in this adulterous and sinful generation, of them the Son of Man will also be ashamed when he comes in the glory of his Father with the holy angels.”

Spending time with my stepfather Pops often meant taking in a baseball game. The rare treat, a live game at the stadium, came with the bonus of Dodger dogs and peanuts. More typically, it meant hanging out on the couch, game on the television with the sound off, and Vin Scully calling the game on the radio. While my baseball speak is a little rusty, obvious excitement came from bases loaded and a homerun blasted out of the park. Personally, the drama of the sacrifice fly had me on the edge of my seat. The batter intentionally hits a ball, popping it up in the air, arcing it toward a fielder who catches it for the easy out, while the runners on base run like crazy to home to score in the meantime. The batter is out, sacrificed for the team to get ahead. The drama of it was the self-sacrifice. We could come up with real-life examples of self-sacrifice when someone dies to save someone else but the point is made. The self-sacrificing action is voluntarily taken by choice for the good of the whole.

Self-sacrifice is the name of the game in our Gospel of Mark reading today. It’s the first time in Mark that Jesus has taught about his death. Up to now, there have been healing after healing, calming storms, and feeding thousands. Jesus and the disciples were on a winning streak. The good news was easy marketing. Just before our reading today, Peter had declared Jesus to be the Messiah. He was batting 1.000. His discipleship star was rising quickly. No risk of being traded. How quickly the momentum shifts.

As far as Peter was concerned, Jesus had just preached a three-strikes-you’re-out sermon that highlighted his suffering, rejection, and execution. He pulled Jesus aside and rebuked him. Not a bad coaching strategy. If you have something tough to say, you create privacy to work it out. Jesus was having none of it. Jesus turned himself and Peter back to the disciples for an intense, public rebuke. Then he called the crowd in with the disciples, following up with another intense teaching moment in which he commands them to deny themselves and take up their cross if they want to follow him.

The key in Jesus’ teaching is the self-sacrifice. It’s obvious that going after the religious leaders and the power of Rome is not the path to hitting the salary cap in a multi-year contract. Jesus made choices along the way. Jesus chose. That shouldn’t come as a surprise because he himself came from a surprising choice. Just before Christmas, we heard the story of the angel Gabriel announcing to Mary that she would conceive by the Holy Spirit and have a son named Jesus.[1] Although confused by how the plan was going to come together, Mary said, “Here am I, the servant of the Lord; let it be with me according to your word.” At enormous risk to herself, she assented to the plan. In those days, turning up pregnant and unmarried could have meant death for her. But Mary said, “Let it be with me.” She said, “Let it.” Mary chose. Jesus chose.

Leading by example, Jesus commands his disciples in what smacks of another three-strikes-you’re-out teaching – deny yourselves, take up your cross, and follow me.  A good agent would have told him that this is not an effective message for building a following and that Jesus should stick to healing and feeding. But the power of what Jesus teaches comes from his example. He wasn’t asking his disciples to choose anything that he wasn’t also willing to choose. The choice prohibits these verses from being used to justify abuse and suffering, used to keep someone in an abusive relationship. The self-defined choice makes all the difference.

Self-denial sounds Lenty and familiar. Giving up chocolate or another tasty treat is emblematic of the season of Lent. It makes sense that choosing to give up something that’s frequently enjoyed would serve as a reminder to pause, pray, and recenter our thinking around God’s presence and priorities. All good things. It’s more likely that Jesus’ command to the disciples to deny themselves meant giving up things like power, influence, ego, and control for discipleship priorities like compassion, mercy, faith, and hope. Things he preached and taught about regularly in his ministry. But it’s not self-denial for its own sake. There’s a purpose to self-sacrifice beyond accumulating discipleship stats. Also, a word of caution here. Jesus’ command is not a call to become mini saviors. Jesus’ consistent teachings across the gospel accounts calls his disciples into becoming neighbors. So, note to self: neighbors not saviors. An important distinction especially considering Jesus’ command to the disciples to take up their cross.

Taking up our crosses is informed by Jesus’ self-sacrificing example. It’s helpful to consider what we deny ourselves so that there’s space for a cross – letting some things go to make room for what’s being asked of us. Again, not self-sacrifice for its own sake, but for the sake of the gospel which Jesus says saves lives. Our lives. There are no easy answers in a sermon that lasts minutes. It’s discipleship in the big leagues. Questions about self-denial can be brought to God both individually and congregationally. Individually we can pray, “God, what are you asking me to give up, making room for your will?” We can talk to people we trust, inviting counsel from faithful people in our lives. Sourcing ourselves with multiple perspectives helps prevent mini-savior errors. The same is true congregationally. We went through a strategic planning process over the last few years that helped us discern our collective discipleship internally as a faith community and externally as neighbors in the wider community. Today’s congregational meeting and vote about our vacant land being developed into affordable housing is one more step in the process.

At the end of the day, the cross we count on is not the one we take up as our own. The cross we count on is the one that Jesus taught about here in Mark. The cross on which he hung after great suffering and rejection. The cross was his own. His individual event. His choice. His self-sacrifice. Like Peter, we struggle to understand it but equally depend on it for the life given to us by the one who poured out his life. If you hear nothing else today, please hear this, we are set free in discipleship by the cross of Christ, which means that the road to God is not paved by any deeds or do-goodery on our part. God’s presence in our lives is given by the grace of Jesus through the cross of Jesus, undeserved and unearned by us. Martin Luther described this as the freedom to “sin boldly” for the sake of the gospel. Meaning that it is difficult, more like impossible, to tease apart our flawed motives from our faithful interpretation of God’s will. So we make choices as best we can, asking for forgiveness and celebrating God’s grace as we follow Jesus on the journey.