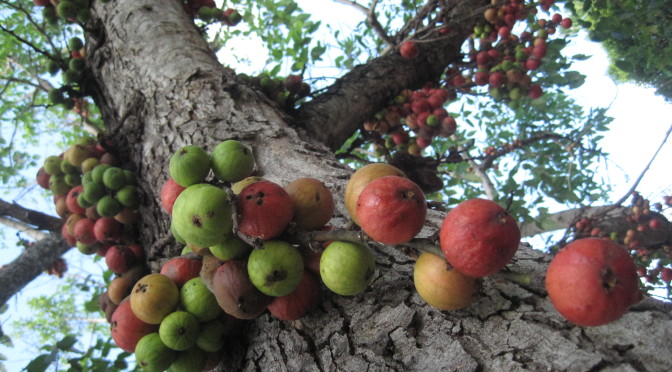 6 Then he told this parable: “A man had a fig tree planted in his vineyard; and he came looking for fruit on it and found none. 7 So he said to the gardener, “See here! For three years I have come looking for fruit on this fig tree, and still I find none. Cut it down! Why should it be wasting the soil?’ 8 He replied, “Sir, let it alone for one more year, until I dig around it and put manure on it. 9 If it bears fruit next year, well and good; but if not, you can cut it down.’ ”

My husband worked many different jobs as a kid up through his years as a college student.  In our house we have a digital clock that he bought with paper route money in middle school.  Whether or not to keep the clock is a topic of conversation that bubbles up every few years.  You can see by its presence how those conversations go.  Some of Rob’s jobs lasted longer than others depending on his age and the season of the year.  Tales from his summers of hot tar roofing come up every so often.  And, for a period of weeks, he pruned apple trees.  Pretty consistently in the apple orchards there were apple trees. Just like in vineyards there are pretty consistently grape vines.  Apple trees make apple orchards and grapes make vineyards.  See how that works?

Yet today, in the Bible verses about the vineyard, there is a fig tree.  Maybe not the most understandable move for a vineyard owner.  Fig trees take a fair amount of the surrounding water, they create shade over the vines, and they grow fruit that attract birds who wouldn’t discriminate between eating tasty figs and eating tasty grapes.[1]   He made the unusual move to plant the tree so he can also do whatever he wants to it.  It’s not bearing fruit?  That seems like a good enough reason to get rid of it.  The order is given to the gardener, “Cut it down!”  This comes as no surprise in the book of Luke.  In Luke, the third chapter, John the Baptist gave a speech to the crowds who lined up at the Jordan River.[2]  The crowds came for the baptism of repentance for the forgiveness of sins.  John the Baptist hollered at the crowds to bear fruit worthy of repentance.  He also warned them that the trees that didn’t bear fruit would be cut down.

Note this carefully in the reading today: No tree is cut down in the vineyard.  Why not?  There’s a gardener.  A thinking gardener.  This gardener wants to put some manure on the tree and give it some time to bear fruit.  In verse 8, the gardener says, “Sir, let it alone…”  In Greek, the word translated “let it alone” can also be translated “forgive.” [3]  The Greek form of the word is the same here in verse 8 as it is when Jesus says the words from the cross in Luke: “Father, forgive them, for they know not what they are doing.”[4]  Let it alone.  Forgive.  This is language of urgent grace.  Of grace that is as expansive as it is urgent and timely.

Time is something that ran out for the people in the first part of the Bible reading.  There’s a gory murder of Gentiles by Pilate and there are the people crushed by the tower of Siloam.  Jesus tells the crowds that the peoples’ sin did NOT cause their deaths.  Divine punishment is not the explanation for the tragedies.  And, in reverse, this also means that there’s no assurance that staying on the right side of God means safety in an unpredictable world.  From those tragic deaths, Jesus leads into the parable of the fruitless fig tree and the impatient vineyard owner.

One historical reading of this parable makes God the vineyard owner and Jesus the gardener.  The problem with this reading is that it sets up God as angry and malicious which, David Lose argues, is not consistent with Luke.[5] In Luke, Jesus describes God as a father who runs with robes flying toward his prodigal son who finally comes home.[6]  And, alternately, Jesus describes God as the woman who searches high and low for a lost coin, rejoicing when it is found.[7]  God and Jesus are not pitted against each other in Luke so why would we read the parable of the fig tree that way?

Jesus asks the crowd two questions beginning with “Do you think that…?”   He asks them if they think the Gentiles deserved their murders.  He asks them whether they think the people crushed under the fallen tower deserved their deaths.  He answers his own question by saying to them, “No, I tell you.”   In the parable of the fig tree, the assumption is that the fig tree is on a time table to bear its fruit and show its value. The gardener asks the vineyard owner for some time to do some tending to see what might grow.

Time is something that seems in short supply.  A canceled appointment can be a gift of time.  Somebody showing up unexpectedly can be a gift of time filled.  Time opening up differently than we thought can be gift.  In the parable, the gardener is opening up time against the threat of a tree getting cut down.  No tree gets cut down in today’s parable.  In fact, the gardener is clear that he won’t be cutting any trees down.  He gives the job back to the vineyard owner.  The owner will be the one cutting, not the gardener.

Some of us are reading a book during Lent about the Lord’s Prayer.[8]  A couple weeks ago we focused on the part of the Lord’s Prayer in which we ask God that, “Thy kingdom come.”  We can so easily make this kingdom about God’s vengeance.  About God’s kingdom coming to cut down the people who deserve to be cut down.  But that interpretation does an injustice to the parable of the fig tree.  It also does little by way of Jesus’ death on a cross.

We pray, “Thy kingdom come…”  This petition includes a kingdom where God dies on a cross rather than lifting a hand in violence against anyone.  A kingdom where the response to sin is mercy not punishment.  A kingdom on earth in which we will die but we will perish as people knowing that mercy exists even now, today.  A kingdom led by God who calls us to repentance and into life.  That IS the kingdom that is here and that is coming.  A kingdom proclaimed from a cross: “Father, forgive them, for they do not know what they are doing.”  A kingdom where God’s last word is mercy.