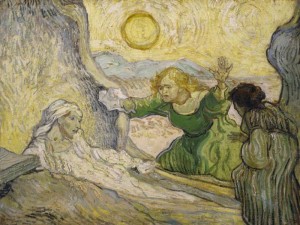 John 11:1-45 Now a certain man was ill, Lazarus of Bethany, the village of Mary and her sister Martha.  2  Mary was the one who anointed the Lord with perfume and wiped his feet with her hair; her brother Lazarus was ill.  3  So the sisters sent a message to Jesus,  “Lord, he whom you love is ill.”  4  But when Jesus heard it, he said, “This illness does not lead to death; rather it is for God’s glory, so that the Son of God may be glorified through it.”  5  Accordingly, though Jesus loved Martha and her sister and Lazarus,  6  after having heard that Lazarus  was ill, he stayed two days longer in the place where he was.  7  Then after this he said to the disciples, “Let us go to Judea again.”  8  The disciples said to him, “Rabbi, the Jews were just now trying to stone you, and are you going there again?”  9  Jesus answered, “Are there not twelve hours of daylight? Those who walk during the day do not stumble, because they see the light of this world.  10  But those who walk at night stumble, because the light is not in them.”  11  After saying this, he told them, “Our friend Lazarus has fallen asleep, but I am going there to awaken him.”  12  The disciples said to him, “Lord, if he has fallen asleep, he will be all right.”  13  Jesus, however, had been speaking about his death, but they thought that he was referring merely to sleep.  14  Then Jesus told them plainly, “Lazarus is dead.  15  For your sake I am glad I was not there, so that you may believe. But let us go to him.”  16  Thomas, who was called the Twin,  said to his fellow disciples, “Let us also go, that we may die with him.”  17  When Jesus arrived, he found that Lazarus  had already been in the tomb four days.  18  Now Bethany was near Jerusalem, some two miles  away,  19  and many of the Jews had come to Martha and Mary to console them about their brother.  20  When Martha heard that Jesus was coming, she went and met him, while Mary stayed at home.  21  Martha said to Jesus, “Lord, if you had been here, my brother would not have died.  22  But even now I know that God will give you whatever you ask of him.”  23  Jesus said to her, “Your brother will rise again.”  24  Martha said to him, “I know that he will rise again in the resurrection on the last day.”  25  Jesus said to her, “I am the resurrection and the life.  Those who believe in me, even though they die, will live,  26  and everyone who lives and believes in me will never die. Do you believe this?”  27  She said to him, “Yes, Lord, I believe that you are the Messiah,  the Son of God, the one coming into the world.”  28  When she had said this, she went back and called her sister Mary, and told her privately, “The Teacher is here and is calling for you.”  29  And when she heard it, she got up quickly and went to him.  30  Now Jesus had not yet come to the village, but was still at the place where Martha had met him.  31  The Jews who were with her in the house, consoling her, saw Mary get up quickly and go out. They followed her because they thought that she was going to the tomb to weep there.  32  When Mary came where Jesus was and saw him, she knelt at his feet and said to him, “Lord, if you had been here, my brother would not have died.”  33  When Jesus saw her weeping, and the Jews who came with her also weeping, he was greatly disturbed in spirit and deeply moved.  34  He said, “Where have you laid him?” They said to him, “Lord, come and see.”  35  Jesus began to weep.  36  So the Jews said, “See how he loved him!”  37  But some of them said, “Could not he who opened the eyes of the blind man have kept this man from dying?”  38  Then Jesus, again greatly disturbed, came to the tomb. It was a cave, and a stone was lying against it.  39  Jesus said, “Take away the stone.” Martha, the sister of the dead man, said to him, “Lord, already there is a stench because he has been dead four days.”  40  Jesus said to her, “Did I not tell you that if you believed, you would see the glory of God?”  41  So they took away the stone. And Jesus looked upward and said, “Father, I thank you for having heard me.  42  I knew that you always hear me, but I have said this for the sake of the crowd standing here, so that they may believe that you sent me.”  43  When he had said this, he cried with a loud voice, “Lazarus, come out!”  44  The dead man came out, his hands and feet bound with strips of cloth, and his face wrapped in a cloth. Jesus said to them, “Unbind him, and let him go.”  45  Many of the Jews therefore, who had come with Mary and had seen what Jesus did, believed in him.

Long ago, in a galaxy far, far away, I was in college for the first time.  I had a good friend and fellow dorm-mate, whom I’ll call Rickie, who struggled mightily with many things about her life.  My door was open more often than not and one of my vivid memories of that first year of school was Rickie, regularly moving into my doorway, throwing her forearm up to her forehead and lamenting, “My life is a graveyard of buried hopes.”    Her melodrama would crack us up into belly laughs and help to lift her dark clouds for a little while.  While there were moments when her gesture was simply over-the-top theatrical, it was her truth as a fully loaded lament…“My life is a graveyard of buried hopes.”

Martha ran to meet him with a faith-filled lament, “Lord, My brother is dead, if you had been here, he would not be dead and, beyond that, I know that God is still listening to you.”  Her lament echoes with accusation even as it echoes with faith.  What follows between Martha and Jesus is a conversation of faith.  Jesus met Martha’s faith-talk with his own faith-talk.

Mary also ran to meet Jesus but collapsed at his feet sobbing, “Lord, my brother is dead, if you had been here, he would not be dead.”  Period.  Mary, like her sister Martha, is in a faith-filled lament but in no condition to speak further.  What follows between Mary and Jesus is a connection of heart.  Jesus met Mary’s pain with his own pain, and Jesus wept with her.

Maybe you’re sitting here today overwhelmed by the thought of losing someone whom you love into the arms of death and you wonder how you will live without this person you love so much.  Or maybe you have already loved and lost someone, or more than one someone, into the arms of death.  Sitting at a bedside watching illness capturing the person you love little by little, moment by moment, breath by breath.  Lamenting either the speed at which death happens or frantically praying for death to end the suffering or desperately hoping for physical cure even to the last breath.

Know this…Jesus, God in the flesh, God with us, meets you where you are in your moment of loss, in your moment of pain.  Powerfully communicating the “the immeasurable depth of human worth” through his tears.[1]  And that can feel like the end of the story; indeed, many sermons end right here.  In our grief and in our fear, Jesus both speaks a comforting word and weeps with us, offering provisional comfort in the midst of our grief.  But, in the quiet, in the dark hours, in the honest moments, in the fear of dying, in the terminal prognosis of our earthly bodies, many of us come face to face with our fear of death.  This fear builds out into tunnel vision, or maybe we could call it tomb vision, that all we experience here on the planet is all that there is…that we end up dead…entombed…done…gone…

But then, there’s Jesus, standing and staring at a stone in front of his friend’s tomb foreshadowing time soon spent in his own tomb.  There is Jesus who says, “Lazarus, come out!”  And the man came out.  Lazarus, loved by Jesus, was given temporary reprieve from the terminal condition we call living.  Nobody has seen Lazarus still running around have you?  Clearly he had to go through death a second time.  But I invite you to consider that the inevitability of death is not ultimately not the end.[2]  Jesus gave life to Lazarus which intensified Jesus’ death spiral toward the cross.  And the cross is the place where Jesus finally destroys the inevitable so that the ultimate of resurrection is possible.

Lazarus, a specific person, in a specific time and place, dies and comes back into life through Jesus – signifying all the people of the world whom God so loves, across time and place, who also die and are raised to new life in resurrected bodies by the power of the Spirit.

And so, Jesus, whose death on a cross stirs up faith through that same cross,

Jesus, whose death on a cross pours out grace upon grace in forgiveness and healing,

Jesus, whose death on a cross reveals the depth of divine love,

Jesus, whose death on a cross sweeps us up into relationship with the eternal God,

And Jesus, whose death on a cross sets you free to love and care for your neighbor,

Jesus will stand at your tomb and say to you, “Come out, I refuse to live without you!”