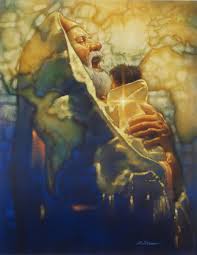 25 Now there was a man in Jerusalem whose name was Simeon; this man was righteous and devout, looking forward to the consolation of Israel, and the Holy Spirit rested on him. 26 It had been revealed to him by the Holy Spirit that he would not see death before he had seen the Lord’s Messiah. 27 Guided by the Spirit, Simeon came into the temple; and when the parents brought in the child Jesus, to do for him what was customary under the law, 28 Simeon took him in his arms and praised God, saying, 29 “Master, now you are dismissing your servant in peace, according to your word; 30 for my eyes have seen your salvation, 31 which you have prepared in the presence of all peoples, 32 a light for revelation to the Gentiles and for glory to your people Israel.” 33 And the child’s father and mother were amazed at what was being said about him. 34 Then Simeon blessed them and said to his mother Mary, “This child is destined for the falling and the rising of many in Israel, and to be a sign that will be opposed 35 so that the inner thoughts of many will be revealed—and a sword will pierce your own soul too.” 36 There was also a prophet, Anna the daughter of Phanuel, of the tribe of Asher. She was of a great age, having lived with her husband seven years after her marriage, 37 then as a widow to the age of eighty-four. She never left the temple but worshiped there with fasting and prayer night and day. 38 At that moment she came, and began to praise God and to speak about the child to all who were looking for the redemption of Jerusalem. 39 When they had finished everything required by the law of the Lord, they returned to Galilee, to their own town of Nazareth. 40 The child grew and became strong, filled with wisdom; and the favor of God was upon him.

Mary and Joseph are on the move again.  The first time – travel-worn and likely in the early stages labor, they made their way to Bethlehem to be counted in the census.[1]  In our story today, they are parents of only 40 days.  And they are also faithful Jews.  So they take a very, very long walk to Jerusalem, more specifically to the Temple, with their first-born son.  It’s time for Mary’s purification and for Jesus’ presentation to the Lord. 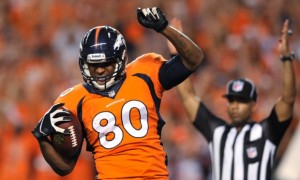 Joseph and Mary have been busy with details – from the earthy to the civic to the religious.[2]  They move into the temple cradling this child as carefully and as proudly as Julius Thomas carrying the ball into the end zone.[3] (Bet you though I couldn’t sneak in a Super Bowl reference…)

As they move into the Temple, what happens?  Simeon, having waited his whole life for this moment and guided by Holy Spirit, swoops into the Temple and scoops up the baby.   The parents likely didn’t know Simeon.  The story tells us that he was a man in Jerusalem, righteous and devout – a member of the congregation but not its designated clergy.  This was the man who swooped in, “took [Jesus] in his arms and praised God.”[4]

Simeon is fascinating.  A long-time member of the parish, he is guided by the Holy Spirit into the temple that day and starts talking about God’s salvation in Jesus.[5]  Simeon’s song sounded a certain way because of the congregation in which he was formed.  Throughout the centuries since Simeon, the personal and congregational witness of God’s whole church looks thousands of different ways – from home churches to prison congregations to cathedrals and everything in between.

In the face of such diversity between churches we are tempted to set up ideal notions of church.  Whether it’s high-church or low-church or big church or small church or rock-band church or liturgically traditional church, we all seem to have opinions one way or another about which is better.

Dietrich Bonhoeffer, in his short, wonderful book Life Together, reminds us that ideal Christian communities do not exist but that Christ-centered ones do.[6]  Most of God’s churches are simply groups of people, very often relative strangers to each other, who are guided by the Holy Spirit and suddenly find Jesus in their arms.

Finding Jesus in their arms, in light of Simeon’s song, can sound like a lovely, soft metaphor.  Simeon’s joy, and the new life of the Christ-child, can be the unbearable lightness of being that resonates for some of us.  But in the midst of his joy, Simeon speaks challenging words too – “This child is destined for the falling and rising of many in Israel, and to be a sign that will be opposed so that the inner thoughts of many will be revealed.”[7]

This is a complex metaphor to be sure, but what does it mean in this place, here in the congregation of Augustana with these people – some whom you may know and likely many that you do not.  Having been called among you as a pastor one year ago today, I’d like to share a little about what I see.

Augustana’s 135 year history is a bit of a rarity this far west of the Mississippi.  Some of you sitting in the pews have a generational history here that includes parents and grandparents, aunts and uncles, being baptized, confirmed, married, and buried here.  And some of you relocated to Denver years ago, discovered Augustana, and have been members for years.  There is a rich regard for the history of this congregation as a place where community has been forged by the work of many of you over time, through the power of the Spirit.  This is the hard-won kind of community that builds over time.  The kind of community that naturally includes both friendships and truces, joys and disappointment, plenty and want…because, of course, there are people involved.

And many of you have been guided into this congregational community more recently.  Some of you come to heal – to sit quietly and be consoled by the sacraments of communion and baptism as well as scripture and song while Christ and his body, the church, create space for you to heal over time.  Some of you come ready to connect, roll up your sleeves and revel in doing the work of congregational and community ministry.  And some of you come dubiously, wondering what everyone seems so excited about when there is so much to believe and disbelieve in the church and outside of it.

Whatever shape we show up in and for however much time we’ve been here, we are much like Simeon.  All of us are guided by the Spirit to be together in this particular way on this particular day of church; made new again today as Jesus is handed into our arms and waiting to see what happens next.

Simeon’s song of praise as well as his words to Mary emphasize that is it the Spirit who’s in charge of what happens next.  It is the Spirit who gifts each one of us for particular work in God’s world that also includes the church.  This is good news.    So stay tuned…

Today, February 2nd, is formally called Presentation of Our Lord.  This is a day every year when the church celebrates Jesus’ moment with Simeon and Anna in the Temple and bursts into praise.  The Prophet Anna’s words are not given to us in our story today.  In a few moments we’ll sing a song of praise.  Lending our voices to Anna, we sing praise to God for the redemption of all, through the power of the Spirit in Christ Jesus our Lord.

[Congregation sings the hymn, “How Great Thou Art”]

[3] I couldn’t resist.  It IS Super Bowl Sunday in Broncos country after all.  This is a nod toward my now not-so-secret dream to guest commentate with Al Michaels and Cris Collinsworth.