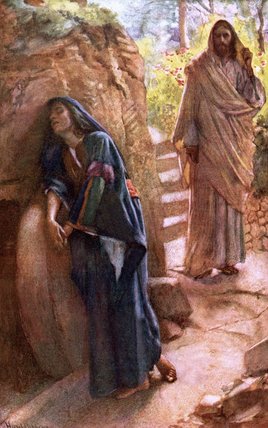 Early on the first day of the week, while it was still dark, Mary Magdalene came to the tomb and saw that the stone had been removed from the tomb. 2So she ran and went to Simon Peter and the other disciple, the one whom Jesus loved, and said to them, “They have taken the Lord out of the tomb, and we do not know where they have laid him.” 3 Then Peter and the other disciple set out and went toward the tomb. 4 The two were running together, but the other disciple outran Peter and reached the tomb first. 5 He bent down to look in and saw the linen wrappings lying there, but he did not go in. 6 Then Simon Peter came, following him, and went into the tomb. He saw the linen wrappings lying there, 7 and the cloth that had been on Jesus’ head, not lying with the linen wrappings but rolled up in a place by itself. 8 Then the other disciple, who reached the tomb first, also went in, and he saw and believed; 9 for as yet they did not understand the scripture, that he must rise from the dead. 10 Then the disciples returned to their homes. 11 But Mary stood weeping outside the tomb. As she wept, she bent over to look into the tomb; 12 and she saw two angels in white, sitting where the body of Jesus had been lying, one at the head and the other at the feet. 13 They said to her, “Woman, why are you weeping?” She said to them, “They have taken away my Lord, and I do not know where they have laid him.” 14 When she had said this, she turned around and saw Jesus standing there, but she did not know that it was Jesus. 15 Jesus said to her, “Woman, why are you weeping? Whom are you looking for?” Supposing him to be the gardener, she said to him, “Sir, if you have carried him away, tell me where you have laid him, and I will take him away.” 16 Jesus said to her, “Mary!” She turned and said to him in Hebrew, “Rabbouni!” (which means Teacher). 17 Jesus said to her, “Do not hold on to me, because I have not yet ascended to the Father. But go to my brothers and say to them, “I am ascending to my Father and your Father, to my God and your God.’ ” 18 Mary Magdalene went and announced to the disciples, “I have seen the Lord”; and she told them that he had said these things to her.

Oh how long the travel to this day!  This day and, in our Bible story, this garden.  In real time, it was about 33 years.  In the time of the church year, our travel began with awaiting Jesus’ Christmas birth.  We wandered with him through his life’s ministry and followed him when he turned toward Jerusalem, toward his death.  Some of us have spent the last 6 weeks of Lent walking the journey to the cross with Jesus – listening as everyone who knew Jesus, drifted away from him in denial and fear.  Listening to those stories became reminders that those people who left Jesus to face his death alone and those who killed him could just as easily have been us.

Oh how long the travel to this day!  This day when we enter the dark, pre-dawn garden with Mary Magdalene – her eyes dried out from crying, her mind moving slowly through that cloudy haze of grief, and her body exhausted by lack of sleep – and the wondering continues about what just happened to all that she thought she knew…only to be shocked once more.  Jesus is gone.  Not simply dead on a cross or in a tomb, but, literally, gone.  He’s not where he was supposed to be – similarly to how he wasn’t supposed to be dead on that cross.

Oh how long the travel to this day!  Mary realizes that Jesus isn’t there, runs to tell other disciples, who rush over to see the same thing, and confirm that, indeed, Jesus is not there!  One of the disciples even sees and believes.  But…pause here with me…the story tells us that seeing and believing did not bring understanding to this disciple about what is happening.  At that moment, no one at the tomb in the garden expects it and no one at the tomb in the garden understands it.

Oh how long our travel to this day!  The pace of the world, the ridicule from enemies, the condescension from friends, the smorgasbord of beliefs, the cultural chaos, leaves us yearning for understanding – an understanding that incorporates enlightened thought and sophisticated argument; an understanding that helps us explain how we move from an empty tomb to expecting to meet Jesus in the world, now, today.

Oh how long the travel to this day!  Just when Mary didn’t think it was possible to cry even more tears, she begins to sob.  And this day, Mary’s hope to catch some peace in the garden, to take a breather after all that has happened, is shattered.  The despair is never-ending because everything seems to keep going from bad to worse.  The stone has been rolled away and the tomb is empty and Jesus is gone.  And she gets asked the question, TWICE, about why she’s crying.  And we know how well that question goes over in the middle of a good cry.  Then, finally, she hears her name… “Mary.”  And…she…knows…

Oh how long our travel to this day!  Just when we thought it was safe to go into an Easter garden, we discover that what happens in the garden changes us, changes what we thought we knew about how the world works, changing what we know about how God works.

Oh how long the travel to this day!  As Mary now knows that Jesus is raised from the dead, she now knows that there is life after death and hope in despair.  Called her name by the risen Christ and sent to tell the story, Mary the Apostle, sees the world through eyes that know the worst…yet trust in an ultimate outcome that she simply has no control over.

Oh how long our travel to this day!  Even as we gather here this Easter day, we bring our own confusion or despair or fear or hope to the garden – we bring ourselves.  We wonder where Jesus is and who has hidden him.  We might even prefer that he stay gone – after all, what might it mean if the dead Jesus didn’t stay dead?  We wonder if the tears and fear in our own lives will ever be, or even wonder if they can be, met by the risen Christ.

On this day, when we proclaim that “Christ is Risen Indeed,” we join Mary in being named by the Risen Christ as people who so desperately need him.

This Easter day when Christ invades our despair.

This Easter day into which Christ infuses hope anew.

This Easter day when Christ calls your name.

Christ is risen!  He is risen indeed!  Alleluia!

Please say it with me… Christ is risen!  He is risen indeed!  Alleluia!