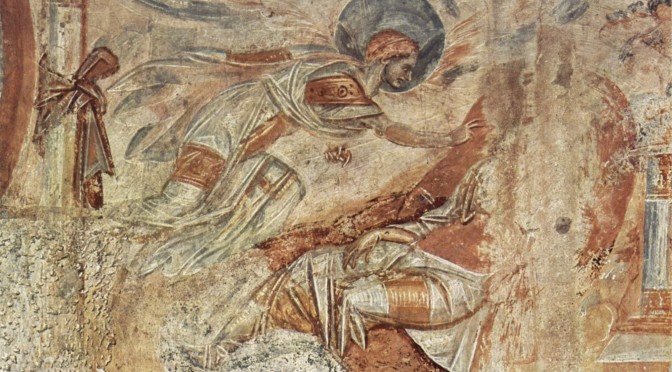 Matthew 1:18-25 Now the birth of Jesus the Messiah took place in this way. When his mother Mary had been engaged to Joseph, but before they lived together, she was found to be with child from the Holy Spirit. 19 Her husband Joseph, being a righteous man and unwilling to expose her to public disgrace, planned to dismiss her quietly. 20 But just when he had resolved to do this, an angel of the Lord appeared to him in a dream and said, “Joseph, son of David, do not be afraid to take Mary as your wife, for the child conceived in her is from the Holy Spirit. 21 She will bear a son, and you are to name him Jesus, for he will save his people from their sins.” 22 All this took place to fulfill what had been spoken by the Lord through the prophet: 23 “Look, the virgin shall conceive and bear a son, and they shall name him Emmanuel,” which means, “God is with us.” 24 When Joseph awoke from sleep, he did as the angel of the Lord commanded him; he took her as his wife, 25 but had no marital relations with her until she had borne a son; and he named him Jesus.

I listen to a lot of people talk about their lives.  While listening, I’m often struck by the magnitude of what someone says and the quiet, matter-of-fact way the story is shared.  There’s the older gentleman in the seat next to mine on the airplane.  The pilot was navigating around thunderstorms. The plane was shaking. I’m sure I was pale and looking worried.  The gentleman next to me asked me if I was nervous. (I thought to myself, “Hah! Are you kidding me?!”) “Yes,” is what I said. He told me that he doesn’t get nervous in planes because it doesn’t get worse than being shot down in the Pacific during World War II and waiting days in the water to get picked up.  The story was longer than that, of course.  He told me bits and pieces, regaling in calm tones and stark detail.  It had the quality of a story told many times.  I could picture it without feeling a need to take care of him while he talked.  He was open to curiosity and questions. His gift was one of distraction from my turbulence terror while he calmly shared his past.

The gentleman’s story, while unique in detail, is common in quality.  How many of us get used to telling our strange tales that have become normal in our own lives but surprise other people in the telling.  Jesus’ birth story is along this line for Christians. We tell a really strange tale, my friends.  We celebrate it in sacred scripture. We sing about it. We pop it up in our homes. I confess I have several such home scenes myself.  Joseph, Mary, and the baby Jesus surrounded by various configurations of animals, angels, shepherds, and magi.  Wood, porcelain, and pottery that is carved, poured, and molded.  Dioramas of faith that proliferate across the land and in my home.

In some ways, it’s such a simple story.  So simple that even a child can tell it.  Last week our young friends here at Augustana put on costume and learned their lines.  They processed into the sanctuary and preached the story of Jesus through a narrated, live diorama.  Their telling of this good news is a mash-up from the gospels of Luke and Matthew and appropriately called, “Simply Christmas.”

The gospel writer today keeps it super simple, too:

“Now the birth of Jesus the Messiah took place in this way. When his mother Mary had been engage to Joseph, but before they lived together, she was found to be with child from the Holy Spirit.”

That’s it.  Nothing flashy. But there is someone who gets a newsflash. Joseph. His betrothed is pregnant and he is not the father.  If that’s not a kick in the gut that takes your breath away then I don’t know what would be.  A man’s proudest agency is taken from Joseph.  Confronted with the news, his initial plan is simple and legal.  Dismiss Mary.  Send her on her way quietly, saving her from public disgrace.  Joseph is justified in his position. Not only in his own mind but in the eyes of the law.  No harm, no foul.  He is good to go.  Simple and legal.  Justified. Resolved.  And then not so simple at all…

“But just when he had resolved to do this, an angel of the Lord appeared to him in a dream.”[1]

The angel, the Lord’s messenger, shows up thwarting Joseph’s justified resolve.  I hate when that happens.  When a good resolve swirls down the drain.  Resolve feels good.  It feels right.  It is powerful, knowing what to do.  Powerlessness?  Not so much.  And definitely not in the way a good resolve feels.  Here’s a clue to part of the good news today.  If there’s room for Joseph in the nativity story, then there is room for me, and there is room for you.[2]

There’s room for us in the Nativity story because Joseph is asked simply to stay and watch the story unfold.  Oddly enough, he asks no questions of the angel in his dream and he’s given no understandable explanation.  In essence, Joseph is told to take Mary as his wife and to name the baby conceived by the Holy Spirit, “Jesus.”  That’s not a lot of information.  In fact, it doesn’t amount to any information he can share with his friends as justification for staying with Mary, especially in light of the vague paternity. And, still, he obeys the angel.

He obeys without any knowledge of what this will mean. Just around the corner, what he can’t see is the visit from the magi.  Those strange people from a faraway place who come to visit Jesus after he is born.[3]  He can’t see the magi’s decision to thwart King Herod.[4]  He can’t see King Herod’s edict to slaughter all the infant children less than two years old because they may or may not be the rumored Messiah.[5]  He can’t see his and Mary’s escape and refuge in Egypt.[6]  There’s so much that Joseph can’t see when he agrees to take Mary as his wife and name the baby Jesus.

James Harnish, a long-time Christian pastor, recalls a story from when he was in college.  He went to see a professor with a very intelligent friend who had a lot of questions about his faith and was frustrated by the simplistic answers people gave him.  His friend asked the professor, “How can I [follow] Christ when I don’t know all that it will mean?”  The professor answered, “None of us knows all that it’s going to mean, but we know enough [to follow Jesus] and we spend the rest of our lives finding out what it means.”[7]

Joseph is obedient without an “i” dotted or “t” crossed.  Some of us see ourselves in Joseph because, like him, our proudest self-agency is also taken away from us.  We do not save ourselves. The name “Jesus” means “God saves” or “the Lord saves.”  He will be born and named Jesus “for he will save his people from their sins.”  Week-after-week we scratch the surface of what this means for us.  Some of us wonder about intellectual problems raised by scripture that don’t jive with our experience or knowledge.  Some of us struggle with the mystery and want it solved so that then we could have faith.  Some of us are drawn to action on behalf of people who need help but don’t know where to start or how to keep going.  For all of us in those moments, Joseph is our guy.

In light of Joseph’s lack of information, his obedience to the angel’s wild request is shocking, confusing, and disturbing.[8]  If we let it, our familiarity with Jesus’ birth story means that our quiet, matter-of-fact way of telling it can oversimplify what God is doing all around us. God’s audacity in slipping into powerless, vulnerable skin is echoed by Joseph’s powerless, vulnerability as well as our own – the breadth of divine power revealed in the depth of divine, self-giving love.  Like Joseph, we spend the rest of our lives figuring out what it means to follow Jesus.  Like Joseph, we watch, wait, and wonder as Emmanuel, God with us, shows up and saves.  Thanks be to God.