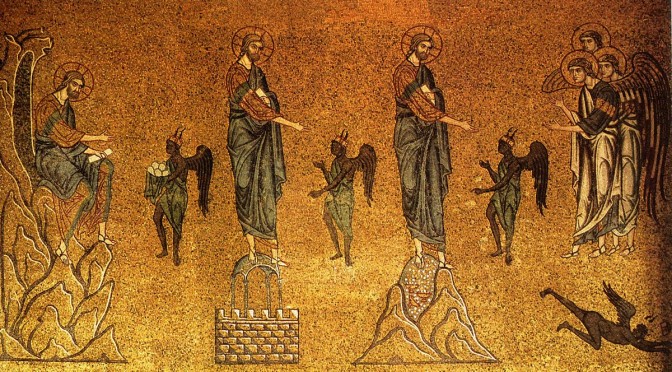 Luke 4:1-14a Jesus, full of the Holy Spirit, returned from the Jordan and was led by the Spirit in the wilderness, 2where for forty days he was tempted by the devil. He ate nothing at all during those days, and when they were over, he was famished. 3The devil said to him, “If you are the Son of God, command this stone to become a loaf of bread.” 4Jesus answered him, “It is written, ‘One does not live by bread alone.’ ”
5Then the devil led him up and showed him in an instant all the kingdoms of the world. 6And the devil said to him, “To you I will give their glory and all this authority; for it has been given over to me, and I give it to anyone I please. 7If you, then, will worship me, it will all be yours.” 8Jesus answered him, “It is written,
‘Worship the Lord your God,
and serve only him.’ ”
9Then the devil took him to Jerusalem, and placed him on the pinnacle of the temple, saying to him, “If you are the Son of God, throw yourself down from here, 10for it is written,
‘He will command his angels concerning you,
to protect you,’
11and
‘On their hands they will bear you up,
so that you will not dash your foot against a stone.’ ”
12Jesus answered him, “It is said, ‘Do not put the Lord your God to the test.’ ” 13When the devil had finished every test, he departed from him until an opportune time.  14Then Jesus, filled with thte power of the Spirit, returned to Galiliee.

Ah Lent. Neither Biblical nor traceable to our first century ancestors in the faith, we sing, pray, and talk about the 40 days of Lent as if it’s been this way since Jesus’ death and resurrection. It just feels like the way it’s always been even though my own experience didn’t include Lent for many years. In fact, it wasn’t until more recent decades that American Lutherans included the imposition of ashes in Ash Wednesday worship. Why would I share this fun fact on the first Sunday in Lent? Just a few days into our 40 days? Because most of what we do in worship celebrates our freedom in Christ. Jesus didn’t prescribe our worship liturgy. Our worship developed from our Jewish ancestors in the faith and their traditions since the earliest Christians were Jewish because Jesus was a Jew. Our worship and the church year developed from these ancient Jewish practices and God’s bigger story as a way for Christians to experience Jesus’ life, death, and resurrection as the foundational story of our lives in the midst of other noisier, flashier stories. Jesus’ story reorients us to truths like: each life is treasured and loved by God regardless of what any one of us thinks about that life; and the death of Jesus was the logical end of human anger, not God’s. At the end of the day, or at the end of Lent as the case may be, what’s important is returning to the promises of God as the tie that binds us as church.

Our First Century church friends were eagerly focused on Jesus’ resurrection. For you church history buffs, early church controversies (because who doesn’t love a good controversy) included when Easter should be annually celebrated finally settling the Western debate in 325 C.E. at the Council of Nicaea.[1] Get this, the Council decreed that Easter would be celebrated on the first Sunday after the first full moon after the Spring Equinox (March 21). This means that Easter can fall anywhere between March 22 to April 25. There was a recent, 21st century attempt between larger world denominations to pick a Sunday to make it the same time every year but so far it hasn’t worked. I’m a little glad about that because the mystery of how Easter is picked and when Lent falls is kind of cool.

Back to our early church friends, Easter was where it was at and what everything was about. Sunday worship celebrated the Easter resurrection every week. Even through today, Sundays in Lent are considered “little Easters” and are not counted in the 40 days. Find me later if you want to have a conversation about Christian math. The annual celebration of Easter Sunday evolved through Christian communities and quickly became the opportune time of year for adult baptisms. The pre-baptismal teaching and preparation time, sometimes called the catechumenate, originally varied in length, and grew into the 40 days of Lent.

When more and more people became Christians and Christendom expanded into medieval times, there were far fewer adult baptisms and Lent became penitential, focused on Christ’s suffering and death and human sinfulness. In recent times, the church holds both traditions while lifting the baptismal emphasis that resonates with Martin Luther’s concept of ongoing baptismal renewal, of daily dying and rising with Christ. In that spirit, we began worship today with a Thanksgiving for Baptism that holds the tension between the Lenten celebration of baptism and a season of repentance. In Lent, we return to the Lord our God who is gracious, merciful, and abounding in steadfast love.[2] Lent focuses us on the great love of God – who we see incompletely in Jesus and who mostly remains a mystery.

Last Sunday, Pastor Ann invited us into the mystery of Jesus’ mountaintop, razzle dazzle Transfiguration rather than trying to fit it into a box. Today’s mysterious moment in scripture is darker, tainted by temptation and a scripture smack down between Jesus and the devil. As we listen to the story, our mind tries to fit it into a box for it too. But try explaining who this tester (the devil) is and why it’s necessary for Jesus to be tested in the first place. No box can contain it. What we CAN see in the story is that Jesus is offered prosperity, power, and protection if he turned away from God. We know from our own experiences how tempting the promises of prosperity, power, and protection can be. We see their horrors in real time in Russia’s war on Ukraine, in the increasing numbers of our unhoused neighbors, and in the widening divide between the few people who hold extreme wealth and the many millions of adults and children who are living and dying in extreme poverty.

One of the things I appreciate most about Lent is truth-telling. Truth about ourselves and the world. I know we argue about truth as if it’s also a mystery but there are actually things we know. We know that cilantro can taste like heaven or it can taste like hell depending on your DNA. We know that if a few people hoard toilet paper, then there’s not enough for everyone’s bathrooms. And we know, even if we don’t talk about it out loud, that given the right set of circumstances, we can prioritize ourselves as the most necessary and worthy human on the planet before each and everyone else.

Lent is a time to struggle with the truth about ourselves without rejecting ourselves in shame and defeat. Self-rejection does not honor God’s promises embodied by Jesus who claims each one of us as beloved. [3] Here’s the beauty in the story about Jesus’ temptation in case you missed it.[4] The Spirit went with Jesus into the wilderness and Jesus was filled with the power of the Spirit as he left the wilderness. Jesus was part of the community when he was baptized, before he went into the wilderness, and rejoined his community in Galilee as he came out of it. The power of the Holy Spirit is on the journey of Lent with us. The lie is that we’re solitary and alone. The truth is that we’re embedded through baptism into the body of Christ, this community of faith and the church catholic in all times and places.[5]

Our foundational story of Jesus life, death, and resurrection, into which we are baptized, is the core promise that inspires courage in temptation, offers comfort in grief, imparts strength in dark times, and stirs joy found in the gift of life. Baptism’s promise is daily. Daily we are promised that we die with Christ and rise to new life, rising beyond fear with each new dawn – imperfectly and beloved. God’s unbounded grace in Jesus Christ is the good news that shines light in the darkness. Given everything going on in the word right now, we have Lent as a gift. Thanks be to God and amen.

[4] Grateful for Pastor Nic Leither, St. Mark’s Lutheran Church, pointing out the story’s bookends of the Spirit and community in our weekly Preacher’s Text Study.