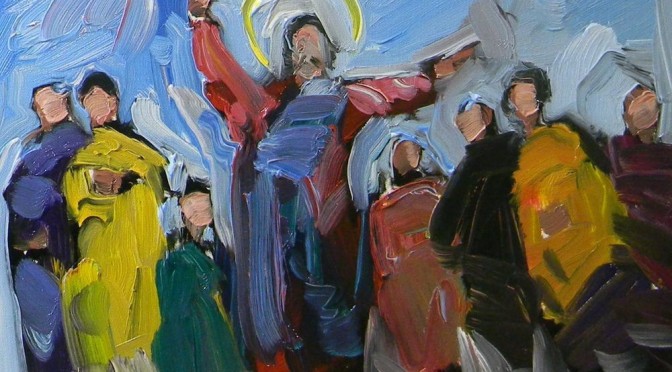 Jeremiah 17:5-10 Thus says the Lord: Cursed are those who trust in mere mortals and make mere flesh their strength, whose hearts turn away from the Lord. 6 They shall be like a shrub in the desert, and shall not see when relief comes. They shall live in the parched places of the wilderness, in an uninhabited salt land. 7 Blessed are those who trust in the Lord, whose trust is the Lord. 8 They shall be like a tree planted by water, sending out its roots by the stream. It shall not fear when heat comes, and its leaves shall stay green; in the year of drought it is not anxious, and it does not cease to bear fruit.
9 The heart is devious above all else; it is perverse — who can understand it? 10 I the Lord test the mind and search the heart, to give to all according to their ways, according to the fruit of their doings.

Growing up in my house meant growing up with a step-dad who would spout pithy sayings often in the form of warnings.  I’ve shared a few of Pops’ sayings with you in the past.  It’s surprising how the sayings come to mind as preachable given the amount of eye-rolling and foot-stomping that greeted them at the time.  One such saying bubbled up when I’d want to go do something with friends. Pops would then give me grief, I’d respond by telling him that my friends were allowed to go, and he’d say, “Would you rob a bank if you friends were doing it too?”  Classic.  I never saw much use in that particular logic as my friends never invited me to rob a bank. Nor did I ever think I would tag along on such a quest even if they did.  Regardless, Pops felt it necessary to regularly warn me of becoming a blind follower into the shenanigan of the day.  Warnings are often wasted on the wayward.  We don’t like the flaws in our logic challenged so we roll our eyes and stomp our feet and discredit the messenger. Pops likely didn’t deserve my disdain.  Similarly, Jesus’ likely didn’t deserve the contempt he received in response to his warnings either.

Warning is one way to think about what we hear today in the “woes” recorded in Luke’s gospel.[1]  There are connections between the language of woe that Jesus uses and the language of woe used by Old Testament prophets.  Prophets didn’t pull any rhetorical punches either.  They wanted people to hear the bad news about their current behavior and call people to repentance, to new ways of being in the world as God’s people.  The woes that Jesus lays down are for those of us who are rich, full, laughing, or admired.  Sure, we have options.  We could roll our eyes and stomp our feet and discredit Jesus or the Bible or the preacher in the pulpit, wasting Jesus’ warning for the wayward.  Or, we could let the warning of the woes settle over us.  Let the warning of the woes challenge our wayward living much like the prophets used to do.  The prophet Jeremiah challenges his listeners not to trust in mere mortals.  By extension, this means we can treat our inherently wayward opinions and circumstances with a bit of mistrust; with a healthy, well-deserved dose of skepticism.

Let me give one small example of what I mean by a healthy dose of skepticism.  Periodically, those of us preachers who show up for preachers’ text study will debate the pros and cons of sharing personal stories.  In this small example of an ongoing debate, it makes sense to wonder why we preachers tell stories about ourselves.  After all, the goal is to point to Jesus in the act of preaching.  It goes without saying that it’s not about spotlighting the preacher.  A healthy dose of skepticism can help challenge the privilege of the pulpit while also trying not to end up the hero of our own stories and sending sermons off the rails – an important, mostly behind-the-scenes task.  Similarly, Jesus’ woes to the rich, full, laughing, and admired can instigate a need to self-justify.  We can find ourselves saying things like, well, I’m not that rich. Or I used to be poor.  Or even more problematic, we can find ourselves trying to justify why other people are NOT rich or full or laughing or admired.  It’s like we read the four blessings and the four woes listed by Jesus as a particular challenge for us to see where we end up in his list. In the meantime, while we’re justifying things all over the place for ourselves and other people, the opening verse of the reading says that “[Jesus] came down with [the twelve] and stood on a level place.”

Honestly, I don’t know if I’ve ever noticed all the leveling language in Luke’s Gospel in quite the same way before.  Maybe it’s because we only get Jesus’ Sermon on the Plain, on the level place, during Year C of the Lectionary Readings when Easter is almost as late in the Spring as it can be.[2]  The last time that it came up in Sunday’s worship readings was in 2004, fifteen years ago.  While preparing and thinking about Jesus coming down to the level place, John the Baptist’s quotes from Isaiah came to mind about smoothing rough ways, filling valleys, and lowering mountains and hills.[3]  Mary’s Magnificat also came to mind about bringing down the powerful and lifting up the lowly.[4]  The leveling is NOT a reversal of bringing the low high and the high low only to change places and repeat the same bad news. Jesus’ Sermon on the Plain, on the level place, in Luke’s Gospel enacted what was proclaimed and sung by John the Baptist and Jesus’ mother Mary.

Jesus came down and stood on a level place with the twelve, and also with “a great crowd of disciples and a great multitude of people from all Judea, Jerusalem, and the coast of Tyre and Sidon.” Naming those locations means that the crowds were full of Jews as well as non-Jews otherwise known as the Gentiles.  Crowds of people showed up from all over, some were Jesus followers, some were Jews, and some were Gentiles.  It’s chaos. People reaching out and touching Jesus, people unbound from the social norms of their day milling around a level place.

Leveling works against our primitive urge for scapegoats. Rene Girard was an atheist philosopher who converted to Christianity late in life after studying scapegoating and the Bible.[5]  Girard expected to find consistencies in scapegoating between other ancient manuscripts and the Bible.  Instead, he found the Bible unique in its rejection of it.

The Gospel of Luke in general, and Jesus’ Sermon on the Plain, on the level place, in particular is a prime example of how the Bible levels the highs and lows of social norms that we tend to describe as “just the way things are.”  This is especially true in societies like ours where “the blessed” are often considered to be the rich or full or laughing or admired while “the woed” are the poor or hungry or weeping or reviled.  Somehow, we misinterpret blessings and woes as deserved and bestowed by God – subconsciously justifying each person’s social location.  The problem is that we end up treating our neighbors based on what we think they deserve rather than on the greatest commandment, so named in all four Gospels.  The greatest commandment goes like this: ‘You shall love the Lord your God with all your heart, and with all your soul, and with all your strength, and with all your mind; and your neighbor as yourself.’[6]  In Luke, the 10th chapter, we’ll hear this greatest commandment coming up in the story of the Good Samaritan.

Jesus, preaching on the level place, is able to name the blessings of the poor, hungry, weeping, and reviled not because of a far off someday but because he calls and invites us all to be a part of the leveling here on earth – seeing each other as siblings in Christ over and above our primitive urges toward scarcity and scapegoating. The primitive urges that increase the risk of becoming a blind follower into the shenanigan of the day.  The good news is that Jesus meets us in the chaos of the level place.  Rather than recycle the same bad news with a new set of faces, he invites us into the good news of our shared humanity, beloved as children of God, and freed into loving our neighbors as ourselves.

[2] Easter is scheduled annually on the first Sunday after the first full moon occurring on or after the vernal equinox. https://www.timeanddate.com/calendar/determining-easter-date.html

[5] Pascal-Emmanuel Gobry. “The unlikely Christianity of René Girard” on November 10, 2015 for The Week (online). http://theweek.com/articles/587772/unlikely-christianity-ren-girard