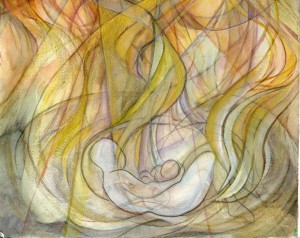 John 1:1-14 In the beginning was the Word, and the Word was with God, and the Word was God. 2 He was in the beginning with God. 3 All things came into being through him, and without him not one thing came into being. What has come into being 4 in him was life, and the life was the light of all people. 5 The light shines in the darkness, and the darkness did not overcome it. 6 There was a man sent from God, whose name was John. 7 He came as a witness to testify to the light, so that all might believe through him. 8 He himself was not the light, but he came to testify to the light. 9 The true light, which enlightens everyone, was coming into the world.  10 He was in the world, and the world came into being through him; yet the world did not know him. 11 He came to what was his own, and his own people did not accept him. 12 But to all who received him, who believed in his name, he gave power to become children of God, 13 who were born, not of blood or of the will of the flesh or of the will of man, but of God. 14 And the Word became flesh and lived among us, and we have seen his glory, the glory as of a father’s only son, full of grace and truth.

I invite you to consider Christmas in the light of The Conversation that creates…that brings things into being…that changes us as we engage with the story and with each other.  Even the Christmas story itself can be thought of as a conversation taking place between the four gospels.  Matthew covers genealogy, conception by the Holy Spirit and the wise men on the move with the star; Mark, similarly to John, begins with John the Baptist, the baptism of Jesus and the urgency of Jesus’ ministry; and Luke gives us no-room-at-the-inn, singing angels, shepherds on the job and a manger maternity ward complete with the baby Jesus.  The four gospels each have a voice in the story of Jesus.

One of my favorite professors, Dr. Ted Vial, has a beautiful way of talking about conversation.  He believes and embodies through his teaching that we grow as people through our interactions – “changing who you are and who I am through talking over important ideas with each other.” [2]  This way of interacting means that we need to trust that we’re actually listening to each other.

I listen to the world a lot these days, in part to seek out a chink in the armor of the current chaos.  I listen to the media that includes television, newspapers and blogs.  And I listen to lots of different kinds of people with lots of different kinds of opinions about the way the world works or the way the world should work.  There is a lot of name calling at play.  If I call you a name, if I label you in just the right way, then I don’t need to listen to you because your ideas don’t matter.  I become someone who is not open to a conversation because I don’t trust you – even to the point of letting you speak to me.  Your words don’t matter.

Yet, the experience and story of Christmas Day assure us that words do matter.  The words that tell us about a manger, a star, a young couple and a baby are a creation story of sorts for us.  This baby was born and then grew up to embark on a three year ministry that shows us how to love, care and serve so that the hope born in the manger really can mean joy to the world.

In some of the pastoral care I have done for another congregation, I had the opportunity to visit a woman in the hospital – I’ll call her Rose.  I had never met Rose and her husband before.  We visited for a short time and then Rose told me that she had a feeling that she was not going to get well this time and she would never go home.  She then leaned toward me and asked if I had brought communion.  And, “no”, I had not brought communion.  We spent a few minutes talking about how that might happen and finally we decided that I would come back later that afternoon.

As Christmas people we are freed to be forgiven and fearless in the midst of difficult times and difficult conversations.

As Christmas people, like Rose when she held out her hand to receive the bread, we hold the baby Jesus in our hands; while at the same time, in a wild cosmic reversal, we are held in the hands of Jesus.