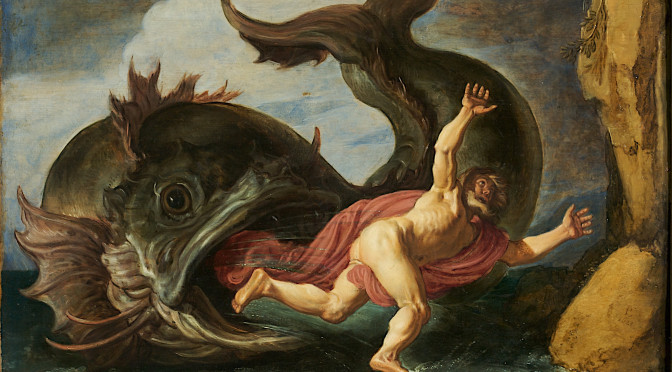 Jonah 3:1-5, 10 The word of the Lord came to Jonah a second time, saying, 2 “Get up, go to Nineveh, that great city, and proclaim to it the message that I tell you.” 3 So Jonah set out and went to Nineveh, according to the word of the Lord. Now Nineveh was an exceedingly large city, a three days’ walk across. 4 Jonah began to go into the city, going a day’s walk. And he cried out, “Forty days more, and Nineveh shall be overthrown!” 5 And the people of Nineveh believed God; they proclaimed a fast, and everyone, great and small, put on sackcloth…  10 When God saw what they did, how they turned from their evil ways, God changed his mind about the calamity that he had said he would bring upon them; and he did not do it.

Jonah is easy to love. At the very least he’s easy to understand. He is an every-man kind of Bible guy. He’s self-righteous for very good reasons. And he takes control of his own story. Jonah’s story is the Bible at its best. Four short chapters include our righteous hero and evil villains of an epic scale.  What could go wrong? Pretty much everything. Notice the beginning of the reading we get today starts chapter 3.  “The word of the Lord came to Jonah a SECOND time…”  Let’s go back and talk about what happened the first time.  The first time, the word of the Lord came to Jonah and told him to go to the great city of Nineveh.  Nineveh wasn’t great because it was a good place full of good people. Nineveh was called great because it was huge and powerful. It was full of Assyrians who had killed and enslaved many of Jonah’s people and would likely kill him if given half a chance.  He certainly didn’t want to give them that opportunity.

Jonah did not have a death wish. He had good reason to hate those Assyrians. So he made a run for it.  He boarded a ship to head the opposite direction of where God wanted him to go.  Short story shorter…there was a storm, Jonah was tossed overboard, and he ended up in the belly of a fish. This is the part of the story that makes it perfect for kids’ storytelling.  Does it get more fun than a slimy, stinky, pouting Jonah spewed out onto the shore by the fish?

Fish slime is not exactly the sackcloth and ashes of repentance but it serves a similar purpose in Jonah’s story.  We often talk about repentance as turning in a new direction. Before the fish slime, he was running away to Tarshish. After the fish slime, he began moving toward Nineveh. Jonah did a 180 degree turn. I imagine him slinking into Nineveh with a bruised ego, some serious fear, and saturated in stink. As a prophet, he did his work with a minimum of words. Eight words, to be exact. Jonah announced to the Ninevites, “Forty days more, and Nineveh shall be overthrown!” That’s it.  Eight words.  Much to Jonah’s chagrin, the people of Nineveh did actually repent – from the King on down to all the animals.  Sackcloth and fasting for everyone![1]

Turns out, God’s mercy even reached as far as Nineveh. Jonah knew it would and greatly resented God and the Ninevites. But Jonah’s feelings on the matter did not limit what God was able to accomplish with a minimum of faithfulness.[2]  Jonah barely cooperated, his eight-word speech to the Ninevites contained no words of hope or good news. Even though he’s an old school prophet, he’s not a very good one. Jonah’s underachievement is good news for us.  Jonah’s got a grudge on.  He later tells God that the reason he first ran away to Tarshish is because he knows that God is “gracious, merciful, slow to anger, and abounding in steadfast love, and ready to relent from punishing.”[3] Jonah knew God would forgive the Ninevites and was so furious he wanted to die when God forgave them.[4]

God is bigger than our grudges and the people we hold grudges against. God loves the people we can’t love. This is good news for us. The very last line in the book of Jonah is said by God. “Then the Lord said [to Jonah], ‘…And should I not be concerned about Nineveh, that great city, in which there are more than a hundred and twenty thousand persons who do not know their right hand from their left, and also many animals?’”  Let’s face it. It’s not easy to acknowledge that hated people are deemed worthy by God for love and compassion when there may be legitimate reasons for our feelings. Regardless, God is able to use our paltry efforts and mixed emotions despite our dismal participation.[5]

It’s not a stretch to imagine Jonah relishing the idea that the Ninevites could go down in flames.  Laughing at Jonah’s antics gives us a chance to laugh at ourselves. How far would we go to NOT be a part of God’s love and compassion for those who, at best, we deem undeserving or, at worst, we deem worthy of destruction?

Jonah’s story puts flesh on Jesus’ challenge to us to love our enemies, to love and pray for them.[6]  This is the story we’re called to tell as disciples.  In today’s reading from Mark’s gospel, Jesus shows up in Galilee announcing the fulfillment of time and God’s kingdom coming near while calling for repentance.  There is a camp of theologians who interpret Jesus’ announcement and call as a moment of now – not to be confused with a distant apocalyptic event in the future that scares us.  In this line of thinking, this is the kingdom that reveals God’s intention for us. This is the kingdom we proclaim as fishers of people. This is the kingdom revealed to replace the present form of the world that is passing away (referred to the reading today from Paul’s letter to the Corinthians).  A world in which we battle each other over land and resources like the Assyrians and Jonah’s people. A world in which one group of people essentially enslaves groups of other people.  A world in which violence and one-upmanship is the name of the game.

Instead, God’s kingdom announces a different world.  A world in which God’s move toward the Ninevites convicts them through Jonah’s half-hearted or even empty-hearted eight prophetic words. For us as Jesus people, we might say that the world announced by Jesus is cross-centered. The cross that proclaims powerlessness as the first move and the new life that becomes possible out of that powerlessness. Jesus’ kingdom means the first move is mercy which interrupts cycles of violence and blame and becomes our hope. Thankfully, the waters of baptism are the daily call into repentance and Jesus’ kingdom of now – no fish slime or sackcloth required.  Thanks be to God.

[6] As part of the Beatitudes in Jesus’ Sermon on the Mount, Jesus says to his disciples, “You have heard that it was said, ‘You shall love your neighbor and hate your enemy.’ 44 But I say to you, Love your enemies and pray for those who persecute you.  Matthew 5:43-44