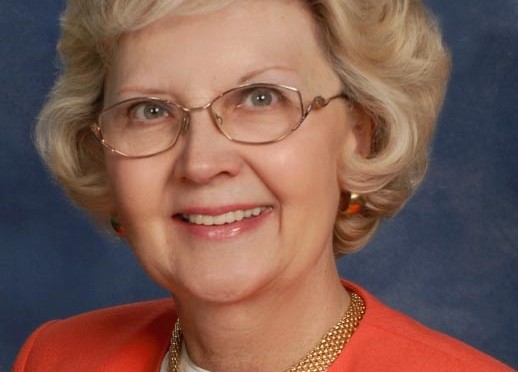 Philippians 4:4-7  Rejoice in the Lord always; again I will say, Rejoice. 5Let your gentleness be known to everyone. The Lord is near. 6Do not worry about anything, but in everything by prayer and supplication with thanksgiving let your requests be made known to God. 7And the peace of God, which surpasses all understanding, will guard your hearts and your minds in Christ Jesus.

Mark 2:1-5 When he returned to Capernaum after some days, it was reported that he was at home. 2So many gathered around that there was no longer room for them, not even in front of the door; and he was speaking the word to them. 3Then some people came, bringing to him a paralyzed man, carried by four of them. 4And when they could not bring him to Jesus because of the crowd, they removed the roof above him; and after having dug through it, they let down the mat on which the paralytic lay. 5When Jesus saw their faith, he said to the paralytic, “Son, your sins are forgiven.”

Think for a moment about Nancy and what comes to mind. For some, her style for hosting funeral receptions is one. More than a few people have said to me how wild it is that we’re in a moment in time when that favor can’t be returned. Although someone told me on Sunday that Nancy would say that when the time came, skip the reception. I guess she got her way there. Nancy had a thorough way of talking through things – whether it was a trip she had taken or a story she told about someone she cared about or her own diagnosis and treatment. Time talking with Nancy took time. And it was time well spent.

You might hear about her upbringing on the farm in Iowa. Cleaning hundreds of eggs with her signature efficiency while she cried the whole time. She got it done but it wasn’t pretty.

You might hear about her enrolling in business school at the first possible opportunity and moving to Denver where she fell in love with the city, with Augustana, with her friends, and, eventually, with Ed.

You might hear about her unofficial parking spot at the Hallmark store where she acquired the 100s of card sent to many of you for birthdays, anniversaries, illnesses, and condolence.

You might encounter the beautiful things that Nancy had in her home and her personal elegance as you encountered her warmth and her kind heart.

And we all know she was organized and good at keeping the rest of us on task while she led by her example of being a good servant to others.

When she was diagnosed with leukemia, a year ago July, Nancy took the task of getting well as seriously as she approached everything else in life. She wanted to defeat it and she gave it everything she had to do so. And when her will wasn’t enough, and her body finally wore out, she died “gently.” That’s how her brother Greg described it – that she died “gently.” It’s why the passage from Philippians was chosen. In verse five, it reads, “Let your gentleness be known to everyone. The Lord is near.” Nancy died as she lived – with a gentle determination into what comes next.

The story of the friends in the Gospel of Mark seems appropriate for Nancy’s funeral. What a scene! These friends are true problem solvers. Their paralyzed friend needs help and they head toward Jesus.  There were so many people that they couldn’t get in the house. So they opened the roof to lower their friend down to Jesus. That is determination infused with deep love for their friend.  This Bible story just shouted to be told as an echo to Nancy’s life.  I can imagine Nancy up on that roof.  Quietly directing the rest of us to be careful with the friend on the mat, monitoring the proper lowering speed to keep the descent smooth, and efficiently homing in on Jesus’ location – directing us to bring our paralyzed friend to Jesus’ attention.

On the flip side, I can also see Nancy as the friend on the mat. The one who desperately needed help from other people and also needed the attention Jesus. She couldn’t say enough about her brothers and those of you who made her life and treatment easier over the last year. When she was diagnosed, it was her turn to receive all that she had given. Note that Jesus doesn’t ask for a list of virtues before he forgives the friend on the mat. He doesn’t ask the friends to recite all the reasons why Jesus should do so. This seems important to notice at a funeral.

At funerals we have a tendency to create a virtue list of the person who died as if the life and virtues of a person can be mixed into cement of sorts, paving the way between us and God. Don’t get me wrong – the faithful virtues of someone like Nancy are a guide and an inspiration to the rest of us. She’s someone we can look up to. But God receives Nancy into the company of the saints in light because of who God is, not because of what Nancy did. Because what Jesus does through the cross, is promise that there is nothing Nancy could do or not do to make God love her any more or any less. That’s the beauty of grace through faith.

The gospel emphasizes the power of God in Jesus. Jesus, who is God. God, who is Jesus. Jesus who came not to condemn the world but to save the world that God so loves. Jesus whose ministry of God’s unconditional love led to his execution on a cross. One thing the cross means is that God knows suffering. More than that, the cross reveals the mystery of God suffering with us when we suffer which means that the cross meets our grief with hope – allowing space at the foot of the cross for sadness and loss while also celebrating the goodness of life in the person who died.

The truth that God would rather die than raise a hand in violence against the world that God so loves.

The truth of God’s self-sacrificing love.

The truth that forgiveness comes from the cross as Jesus says, “Father, forgive them, for they know not what they do.”

The truth about the unflinching love of God in the face of our failures.