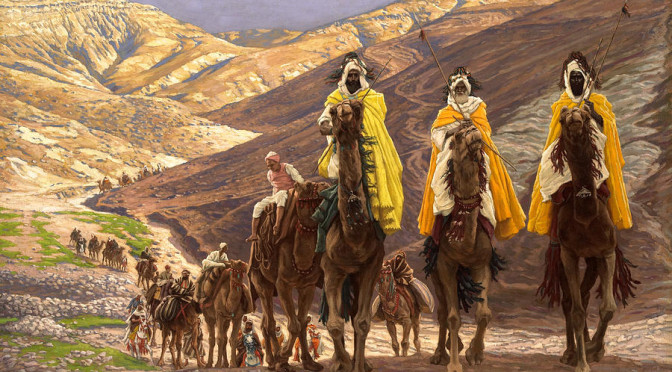 Matthew 2:1-12 In the time of King Herod, after Jesus was born in Bethlehem of Judea, wise men from the East came to Jerusalem, 2 asking, “Where is the child who has been born king of the Jews? For we observed his star at its rising, and have come to pay him homage.” 3 When King Herod heard this, he was frightened, and all Jerusalem with him; 4 and calling together all the chief priests and scribes of the people, he inquired of them where the Messiah was to be born. 5 They told him, “In Bethlehem of Judea; for so it has been written by the prophet: 6 “And you, Bethlehem, in the land of Judah, are by no means least among the rulers of Judah; for from you shall come a ruler who is to shepherd my people Israel.’ ” 7 Then Herod secretly called for the wise men and learned from them the exact time when the star had appeared. 8 Then he sent them to Bethlehem, saying, “Go and search diligently for the child; and when you have found him, bring me word so that I may also go and pay him homage.”

9 When they had heard the king, they set out; and there, ahead of them, went the star that they had seen at its rising, until it stopped over the place where the child was. 10 When they saw that the star had stopped, they were overwhelmed with joy. 11 On entering the house, they saw the child with Mary his mother; and they knelt down and paid him homage. Then, opening their treasure chests, they offered him gifts of gold, frankincense, and myrrh. 12 And having been warned in a dream not to return to Herod, they left for their own country by another road.

Boxes. Sometimes pretty in their own right, boxes usually hold other things – storing things like grits or jewelry; or moving things like books or refrigerators. There are classes about designing boxes. Boxes are big business. Don’t even get me started on the packaging inside. That’s a whole other level. Here’s what started me thinking about boxes, especially in these days of Christmas and giving gifts to children. We carefully pick out something special for a kid, then pack it and wrap it for Christmas. The gift is given, the paper torn off, the gift is plucked out of the box and then ignored while the box is played with for days. It makes me wonder if, like other kids his age, Jesus played with the boxes that held the gifts from the wise men, ignoring the presents inside.[1] He was two years old or less according to the stories about big bad King Herod.[2]  Toddler Jesus likely had little interest in the wise men’s presents of gold, frankincense, and myrrh. But the boxes, now those would be a real treat. Stacking, climbing on, and filling them with dirt could occupy a good amount of time for self-respecting toddlers in any century.  In the 21st century, the crème-de-la-crème of boxes is the appliance box that transforms into a fort or a ship or a special hiding place.

There was no such hiding place for Jesus and his family. Apparently, they couldn’t quite miss being found with that torchlight of a star in the sky.  At least, the wise men found them and were able to drop off their gifts and ooohh and aaahh over Jesus before leaving. Herod had more trouble locating the toddler. The wise men ended up slipping out of town by a different road to avoid ratting out the holy family to the frightened King Herod.  The strange people from the East journeyed a long time for a quick visit. One thing their arrival signifies is that the very young Jesus is now revealed to more people than just his family and more people than Jews. Specifically, the wise men’s arrival reveals Jesus to the nations.  Note that the people bearing gifts are really the ones who found the gift of Jesus in a home – like opening another big box if you stop and think about it.  Yeah, I know, the box thing has a hold.

You know when you open a present partway and then you get an inkling of what’s in the box. Maybe you asked for something special. Or someone heard you mention something you’d really like a few months ago and they remembered.  You tear open the wrapping, slash through layers of tape (cuz if you’re a Trussell, you tape the heck out of the box as if the thing inside could escape by itself), you lift one box top panel to see something you recognize but didn’t for a moment expect and it was different than what you remember and maybe the better for your fuzzy memory. I wonder if the wise men had any of that anticipation and reaction. The star signaled something big. How could it not create anticipation as they journeyed? On departure, something special was clearly afoot because their dream protected the toddler and sent them out of their way to avoid Herod on their way home. Herod who was trapped in the even bigger box of his palace filled with fear. Herod may not have understood the complexity of what was happening, but he knew that that wise men showing up was problematic for him. Power emerging from within his empire but outside of himself must, indeed, have felt frightening.  It’s difficult to imagine those early rumblings of a faith that currently claims two billion followers. Herod’s imagination worked just fine.

Because Christianity is now a worldwide religion, it’s hard to remember that it began as an Eastern one – the original language was Greek; John, the gospel writer lived and died in Asia Minor; most of Paul’s work was in the fertile crescent also known as the Orient or Southwest Asia or the Middle East depending on your vantage point.[3] It was from the east the wise men came and into the east they arrived. The story is known to us and become westernized through our experience that it’s easy to forget the geography. Because Christmas has become a central holiday in the West, it’s hard to remember that Epiphany is centuries older than Christmas. The festival originated in Egypt and traditionally celebrated these events: the birth of Jesus, the wise men, the baptism of Jesus, and Jesus turning water into wine.[4]  In the Eastern Church, Epiphany is called the primary feast of the Incarnation (what we know as Christmas).  It had little to do with Jesus’ birth in early Christianity.[5]  We tend to get so locked in our box of time that it’s hard to imagine how our siblings in the faith may have experienced it differently and continue to experience it differently.

Kinda funny when you think about it. Epiphany is the manifestation of God shining to the nations through Jesus. The wise men embody the arrival of wisdom from the east paying homage to his arrival, kneeling deeply in reverence to the toddler King. The box is opened, the gift unleashed upon all people, and what do the people do? Well, they argue.  Argue about who Jesus is; who Jesus loves; who Jesus saves, doesn’t save, and what saves means. Honestly, we can make the shining gift of Jesus into the worst of ourselves. I’m not sure why that’s compelling and why we feel the need to do so. But we do it.  It’s like we can’t believe that the gift of Jesus isn’t one of our own making. We act like the birth-baptism-crucifixion-death-to-new-life-thing can be contained and taped securely by our wants, likes, and dislikes, or, worse, conforms to the shape of our self-interests and hatreds.  Odd how we want to close the lid on God’s love for the world and God’s forgiveness of sins.[6] Fortunately, for us and for the world, we’re not in charge of God’s gift unboxed to the nations so long ago.

Epiphany reminds us that the darkness inside our self-constructed boxes isn’t as powerful as the light marked by a star. Baptized into that light, we shine the light of Christ through good works so that God in heaven may be glorified. God builds our anticipation through the gift of Jesus and, on Epiphany, through the toddler Jesus who is reverenced by the strangers from a far-off land who seem to understand against all odds. Those of us in the West can give thanks for the wise men from the East who made a journey bearing gifts to the One who doesn’t fit in any box. Thanks be to God and amen.