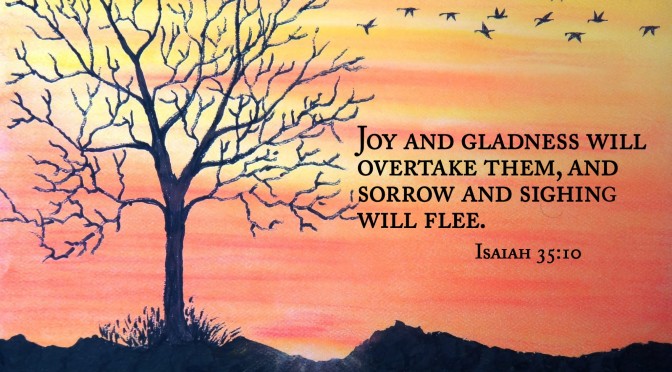 Matthew 11:2-11 When John heard in prison what the Messiah was doing, he sent word by his disciples 3 and said to him, “Are you the one who is to come, or are we to wait for another?” 4 Jesus answered them, “Go and tell John what you hear and see: 5 the blind receive their sight, the lame walk, the lepers are cleansed, the deaf hear, the dead are raised, and the poor have good news brought to them. 6 And blessed is anyone who takes no offense at me.” 7 As they went away, Jesus began to speak to the crowds about John: “What did you go out into the wilderness to look at? A reed shaken by the wind? 8 What then did you go out to see? Someone dressed in soft robes? Look, those who wear soft robes are in royal palaces. 9 What then did you go out to see? A prophet? Yes, I tell you, and more than a prophet. 10 This is the one about whom it is written, “See, I am sending my messenger ahead of you, who will prepare your way before you.’ 11 Truly I tell you, among those born of women no one has arisen greater than John the Baptist; yet the least in the kingdom of heaven is greater than he.

Isaiah 35:1-10  The wilderness and the dry land shall be glad, the desert shall rejoice and blossom; like the crocus 2 it shall blossom abundantly, and rejoice with joy and singing. The glory of Lebanon shall be given to it, the majesty of Carmel and Sharon. They shall see the glory of the Lord, the majesty of our God. 3 Strengthen the weak hands, and make firm the feeble knees. 4 Say to those who are of a fearful heart, “Be strong, do not fear! Here is your God. He will come with vengeance, with terrible recompense. He will come and save you.” 5 Then the eyes of the blind shall be opened, and the ears of the deaf unstopped; 6 then the lame shall leap like a deer, and the tongue of the speechless sing for joy. For waters shall break forth in the wilderness, and streams in the desert; 7 the burning sand shall become a pool, and the thirsty ground springs of water; the haunt of jackals shall become a swamp, the grass shall become reeds and rushes. 8 A highway shall be there, and it shall be called the Holy Way; the unclean shall not travel on it, but it shall be for God’s people; no traveler, not even fools, shall go astray. 9 No lion shall be there, nor shall any ravenous beast come up on it; they shall not be found there, but the redeemed shall walk there. 10 And the ransomed of the Lord shall return, and come to Zion with singing; everlasting joy shall be upon their heads; they shall obtain joy and gladness, and sorrow and sighing shall flee away.

Nothing like a little friendly competition. We, in fact, just wrapped one up in the congregation on Thanksgiving Eve. Those Augustana Early Learning Center children collected chili like crazy and we collected chili like crazy. All together we collected 1,555 pounds of chili over the month of November. The goal was to out-do each other in the name of filling food pantries for Metro Caring and George Washington High School. Friendly competition makes us better in ways we never thought possible – challenging each other to be the best of who we’ve been created to be. We see this in sports when two athletes or two teams allow their rivalry to create deep respect and thrill-a-minute fun. A little like the Heisman trophy finalists Justin Fields and Chase Young who play football for the same team and have each other’s back during the hype and interviews; who play better ball because of each other.[1] The opposite is also true, sometimes we get worried that we’re not going to keep up, or that someone is going to come along and usurp our position. We know when we see the latter – the fits, the whining, the yelling, the lack of eye contact between teammates. We also know when we’re watching the former. When a ballgame winds down to the last seconds and no one knows who going to end up with the winning score but after the game the players laugh and smile in those handshakes and hugs after the game. You know they’ve had a blast. You know the losing team is disappointed. But still the joy of the game is mirrored in the teams’ demeanor towards each other.

The question of competition arises between commentators who study John the Baptist and Jesus. There seems to be agreement that John had a very large following of disciples, enough to have power that threatened King Herod. It’s how he ended up incarcerated as a political prisoner. John’s power is one reason his question from prison is so powerful. John sends his disciples to ask Jesus, “Are you the one who is to come, or are we to wait for another?”  It’s a humble question open to the possibility of Jesus’ greatness – not as threat but as hope. It’s also an Advent kind of question – filled with expectation on the one hand, and with lack of certainty on the other. A simple “yes” or “no” answer would have been easier to take back to John.

But Jesus didn’t give a “yes” or “no” answer. He gave an answer more like a spy movie’s exchange of coded messages. First spy on the inside of the door says, “The milkman delivered chocolate instead of half-and-half;” then the spy outside says, “Cookies would have been better,” which opens the door to let the spy in. Anyone listening can’t decipher the cryptic communication. Maybe Jesus wanted to protect John in the prison cell. Hard to say. It’s possible Jesus knew that John would know the Isaiah reading about the blind seeing, the deaf hearing, the lame leaping, and the speechless singing. They could have been working together like the spies in the old movies passing cryptic messages through their knowledge of Hebrew scripture.

It could be, though, that Jesus simply understands one more thing better than us.  “Yes” or “no” answers are limiting when talking about Jesus. When John’s disciples go back to prison to pass along Jesus’ message, they’re supposed to talk about what they see and hear. Not competition but conversation and even celebration of what they see and hear. Let’s say someone comes up to you and asks, “Do you really believe God was born as Jesus on Christmas?” Rather than answer “yes” or “no” as the question is framed, there’s another way to answer the question by simply saying, “Here’s what I do know.” And following that up with your story of faith in Jesus, with what you see and hear.

John and Jesus’ moment offers us a chance to wonder about where we see Jesus in life – whether it’s our own life or someone else’s. Many of us have heard the Jesus stories for so long that we know by heart the transformations of the blind, deaf, speechless, lame, diseased, and dead. We’ve even experienced those transformations  personally or communally. Which brings us to Jesus’s speech about John after his disciples deliver the message from Jesus to the prison.  Jesus challenges the crowds about what they were doing heading out to hear John in the wilderness. There are subtle references to King Herod whose monetary coin had a reed embossed on it and who wore the soft robes of royalty.[2] Jesus’ references to the king’s power are subtle but acknowledge the threat that John posed to Herod and the reason John ended up in prison. The people were not going out to the wilderness to praise the King. Once again, Jesus highlights John’s gifts and power not in competition but in celebration. In Jesus’ words, the crowds were looking for a prophet. Prophets tell the truth, even the uncomfortable truths, about what’s wrong in the world needing to be made right. As did John, a messenger prophet who would prepare the people for the way.

Isaiah called the way the “Holy Way,” where even the most directionally challenged traveler will be able to stay the path.[3]  On the Holy Way, fear becomes hope and there’s a reversal of everything that competes for the win. Instead, there is only celebration. Humanity is reconciled to God and so is all creation: Blind see, deaf hear, lame move, speechless sing, deserts blossom, water pours in wilderness, and predators vanish.[4]  From crocus to all creation, the Holy Way is the completion of the glimpse we’ve had of Jesus, the one for whom we wait in celebration of all he was yesterday in a baby, today in a living Word, and tomorrow in an eternal God.  Amen.